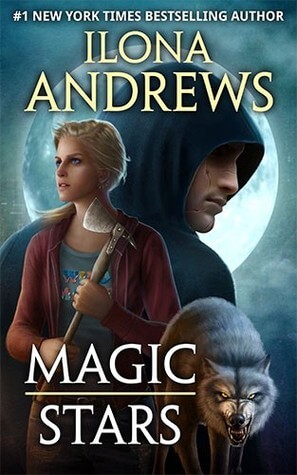 Fans of your Kate Daniels series are rejoicing at the glad tidings that unto us a new novella is born, just in time for Christmas. Even better, it features just about everyone’s favourite secondary characters, Derek and Julie.

At around 60 pages it is a short novella and it doesn’t waste time setting up any world building; for that reason, this is not an entry point to the series. It also fits squarely at 8.5 in the timeline, so anyone who wants to skip to this novella early be aware that there will be spoilers for previous books.

Also there are series spoilers in this review so be ye warned.

A few months before the events of Magic Stars, Kate and Curran left the Pack and took with them (they volunteered) various other (now-former) Pack members, Derek included. Derek belongs to Curran and where Curran goes, Derek goes. Kate is now the Guardian of Atlanta and has an interest in keeping the city safe. Curran shares that interest but is particularly concerned about people who have a connection to the Pack – such as the Ives family who makes excellent knives.

When the entire Ives family is brutally murdered, Curran sends Derek to:

Find the people responsible and make sure they never do it again.

Which he does, with ruthless and brutal efficiency.

Shortly after, Julie, Kate’s adopted daughter, who now refers to herself as Kate’s “Herald” (“the city has a Guardian, and I’m her Herald.”) finds Derek outside the Ives house. A call came in from Luther, the mage working for Biohazard. He was assaulted and a magic rock of some sort has been stolen from him. Kate is out with Curran, so Julie is on the case. She has tracked the magic rock to the Ives house.

Julie arrives during Derek’s confrontation with some young shapeshifters at the house of the murdered family, and he does not like the way one of them leers at 16 year old Julie.

“Shut up. If I decide to ask for your opinion, I’ll say, ‘Hey dickhead,’ so you don’t get confused.”

After teaching the wayward shifters a lesson (that’s a euphemism), Derek and Julie team up to find the magic rock and figure out what it is about it that is worth killing for.

Apart from just spending time with Derek and Julie, there are some very interesting things revealed in Magic Stars. (I won’t tell what they are but let me say to readers: if you read the series, you’re going to want to read this novella. Let me also say that while this isn’t a romance, there is romantic tension in the story and I have expectations.)

As much as I enjoyed the story, it is probably those interesting things which make it a must-read and will, no doubt, be the subject of endless speculation in the Kate Daniels fandom.

Derek has changed a lot since he had molten silver poured on his face; reading from his POV was enlightening but the biggest treat was to see Julie kick ass and take names. Her magical talent is growing and I’m sure she will continue to surprise readers.

I’m not good with ambiguity; there were some subtle clues in this story which I didn’t quite get. I’m looking forward to discussing the novella with friends who can explain to me the things I missed.

I enjoyed the dark humour – something both Derek and Julie share (I think they learned it from Kate and Curran) and the tight storytelling and I can hardly wait until the next full length novel in the series to see what happens next.

Even more exciting, in the Amazon listing, it says “Grey Wolf Book 1” That means there will be more, right? Right? Please make it be so.