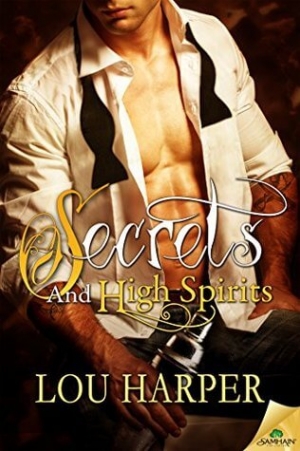 Their love is an explosive cocktail—stirred, shaken, and served with a twist.

Teag and Bruce dream of opening their own bars, but that’s where the similarities end.

Teag, a popular bartender at West Hollywood’s hottest club, is willful, opinionated, and likes to take charge. He envisions his future bar as a boozy oasis for craft cocktails. Unfortunately, while he’s big on ideas, he’s short on funds.

Bruce, on the other hand, is a tower of pirate-tattooed muscle with a laid-back attitude. While he’s good with people, he’s a walking paradox—a wannabe boss with a weakness for bossy men.

Their partnership is a natural fit, but every time they meet, sparks fly as they rub each other the wrong way. Or is it the right way? In the heat of the moment, it’s hard to tell.

Between renovation pitfalls, meddling friends, and miles of police tape, Teag and Bruce struggle to keep their venture—and their budding relationship—from going up in flames. And not the good kind. More like the one on the top of a B52 shot.

Warning: Contains a whipcord-lean and whip-smart bartender who knows what he wants—and how hard he wants it—and a go-with-the-flow bar manager who secretly likes to be told how hard to give it.

I more or less enjoyed a lot of your books. I have read two of the books in this series and I think I have read the third one. I am not certain because I could not find it amongst the purchased books on my kindle, but I am pretty sure I remember the story so I am guessing I managed to catch it when I was on Scribd. I listed this one as one of the wish list books during the Goodreads Christmas Gift exchange and kind Santa sent it to me. I was so excited to read it – I love the understated chemistry which so many of your couples seem to have, I love the humor in your stories and I was really eager to see what kind of mystery would be woven in this story. However, I think based on the blurb I anticipated liking this story even more than other books in the series. The blurb seemed to promise a light-hearted variation on the “enemies to lovers” trope, which if well executed is always a treat for me. The blurb also hinted at a dominance/submission component to the protagonists’ sex life and I can like this a lot.

Unfortunately, a lot of things in plot and characterization did not work out for me. Let’s talk about what did work out first. I really liked that both protagonists are so passionate about what they want to do in life – in this case own a bar. Teag is a very knowledgeable, very talented bartender who wants to own his place and has very specific ideas about what kind of bar he wants to run. Unfortunately he does not have enough money to purchase the place he seems to want most. Bruce is also looking to purchase a bar because his boss (and on and off lover) is selling the place Bruce is working at now. Bruce is a good bartender, but he is an even better business manager, and he has been pretty much running things where he is now.

Bruce and Teag meet when they both (independently from each other) come across a building which is for sale and which could be a good place for their establishments. Teag snaps at Bruce for some imaginary offense he has committed (having a nice ass, as Teag eventually admits to himself) and does not want anything to do with Bruce.

Let’s just say that I wanted to slap Teag right there and then. I am a huge fan of nicely done antagonistic chemistry between protagonists which is eventually transformed into a love story, but I need to see reasons that go beyond – “Oh I am a jerk, so let me be rude to the guy I am attracted to, who did nothing to me whatsoever”.

Teag looked like an idiot to me and I really was not sure what Bruce saw in him. Bruce, nice guy that he is, realizes that even though he has money to purchase the place, he does not have enough to do the renovations. Since Teag works close by, he goes to his place and suggests that they purchase and run the new bar together.

Teag is rude to Bruce. Again. Fortunately he realizes that even though he knows a lot about cocktails and what kind of place he wants, he really knows nothing about the business side. So he goes to Bruce and tells him that he has changed his mind, but things between them have to be strictly professional, etc. Apparently there is a mutual spark between them. I say apparently because when I am informed about “Unresolved Sexual Tension” in the air, I would like to feel it from the pages. I was not feeling that at all. Bruce agrees and offers Teag the role of boss, which Teag happily takes. The analogy Bruce makes is that Teag would be an art director and he would be a stage manager, which Teag surprisingly accepts.

So, let’s talk about Bruce’s preferences in bed. He likes to be dominated (it is all very light-hearted in the book – nothing beyond issuing and following orders) and he feels that Teag is a perfect candidate for that because of his bossiness (aka rudeness). It is very frustrating, because this is the kink I love to read about as I said before, if done well. The most-light hearted book can convey it – but this one did not do it for me. I felt no spark, no intense heat, no nothing.  The book really does not have many sex scenes and I liked that, but the tension which I was told was there, was not there for me and when we get our mandatory “half a book has passed” scene, when Bruce supposedly gets Teag to loosen up, I just wanted to laugh and not in a good way.

“The growl came from deep inside Teag’s chest and coalesced in sharp, brash words. “On your knees, NOW”. With a dizzying intake of breath, Bruce dropped on his knees and stared up, waiting for further commands. Teag pulled one end of the string keeping his borrowed sweatpants up, and the knot came loose. The pants slipped to his ankles and his cock sprang forward in its unabashed glory. “Suck it , big boy.”

I liked their relationship better in the second part of the book. Teag does realize that Bruce is really a reliable partner, a nice guy, and maybe it makes sense to be nice to him. They at least sounded like good friends to me, but I still did not feel much of a romantic chemistry, unfortunately.

There also was a mystery subplot and a small paranormal subplot (Madame Laila from the previous books made an appearance), but the mystery subplot was not interesting enough. It started too late and ended too early.

I know I am mostly complaining in this review, but unfortunately this was my reading experience.

→ Sirius
Previous article: REVIEW: Round Midnight (aka A Midnight Clear) by Emma Barry and Genevieve Turner
Next Post: Monday News: Books are getting longer (?), are the best British writers women?, daily habits of writers, and book cover contest