Usually when I see a book that is in some way based on Jane Austen’s novels, I shy away from it. Though I’ve only read a fraction of the multitude ones that have been published, I find myself sick to death of variations on Austenlandia – the sequels, the prequels, the paranormal and, slightly less so, the contemporaries. It takes a lot to even get me past the blurb stage but “Longbourn” did it. 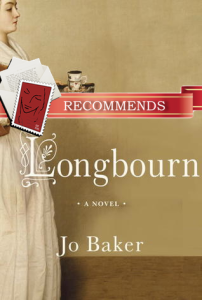 What caught my attention and made me pause, then read the book? It’s the downstairs edition for one thing. The other lure was the lone sentence from the book quoted on the back – “If Elizabeth Bennet had the washing of her own petticoats, Sarah often thought, she’d most likely be a sight more careful with them.” That sounded so period but without trying to sound “Regency,” that I said, “Self, let’s give it a whirl.”

This is the Bennet household and daily affairs as seen by their servants and other working class characters. But it’s not just about the Bennets and the events that take place in “Pride and Prejudice,” it’s about the servants’ lives and a servant romance. Older maid Sarah, younger maid Polly, Mr and Mrs. Hill and footman James have their own worries and concerns and only experience the periphery of the lives of their “betters” as I would expect would have actually happened. It’s not that they don’t know most of what’s going on – they do as servants would. They just aren’t “worked into” that story in unrealistic ways.

When the Bingleys and Mr. Darcy appear and interact with the Bennets, it’s the extra workload for the assembly and ball at Netherfield that we see. When the Gardiners arrive to spend time at Longbourn before Jane returns to London with them, it’s the nasty nappies of the youngest child the servants have to deal with that is mentioned. Mr. Collins is someone Mrs. Hill caters to and attempts to prove her housewifely abilities to as he’ll someday be the master of the house and servants can be chucked out of lifetime positions if the new mistress wishes it. When Charlotte Lucas snares a proposal, Mrs. Hill is somewhat relieved because Charlotte has always appreciated the way Mrs. Hill has managed her duties as well as enjoying Mrs. Hill’s lemon tarts. A batch of them sent home with the Lucases after the announcement is the kind of thing she hopes will secure places for all of them in the future.

The hard work done by the household servants isn’t whitewashed. Wash day is a day long chore that begins at 04:30, chamber pots must be carried down and emptied every morning, call bells can interrupt any activity and the trays carried up for meals are heavy. It’s more obvious to me now why servants were given vales by visiting guests as the staggering workload increased exponentially by their presence. None of this is as glamorous as a London ball but the details worked so effortlessly into the narrative show how hard it was for these people and how much the upper classes depended on them.

Still despite all the gory details of life below stairs, I would have been bored if the only reason behind this book was to shine a spotlight on Mr. Darcy and Elizabeth from a different angle. Yeah, I wanted a love story for Sarah and James and I got one. Better still, it’s one that makes sense and fits into the possibilities of the day.

Sarah isn’t one who’s dreamed of finding her someone. She has recollections of her parents, carried off by typhus, being in love and the Hills have a workable marriage built on respect but Sarah is practical and watching the Bennets doesn’t incline her to matrimony. She’s a servant with little time to moon over the farmhands, not that they interest her anyway, and a Tchaikovsky “Romeo and Juliet Overture” HEA just isn’t on her “to do” list.

James is a man with a history and secrets that he fears won’t allow him the opportunity to settle down, grow roots and woo anyone. Plus he knows that what he has is as good as he’s likely to get. A bed, regular meals, clothes and a small salary aren’t enough for him to think he’s got the right to propose to anyone. So when he realizes he loves Sarah, little about his plans actually change. A wife and possible family are expensive.

Yet love blooms anyway. The bud is slow to appear and even slower to open but I honestly felt these were two working class people of the day, discovering feelings they never expected, and daring to hope for a future in a world where they had so little but were willing to risk it for love. I enjoyed the way Sarah is initially prickly around James and how he likes her the more for it. The quiet way in which they help each other with onerous daily tasks and the simple happiness they take in doing so shows me more about how their feelings are advancing than any showy display.

Though most of the story revolves around how the servants maneuver their way through the lives of the upper class, there are major liberties taken with two of the original P&P characters. I didn’t have a problem with the story line as it could easily be seen as “period” but I’m not sure how this will go over with Austeninstas. Yet if they’re reading the book, they’re probably open to seeing some changes done.

I know I’m not alone in wanted more stories about the merchants and lower classes of the day. There are only so many Dukes I want to read about. Still the story must make historical sense to me – I just can’t believe in dairy maids marrying Viscounts – and not just rely on the relative novelty of the plot. This book does that yet it’s the execution of the story that lifts it up to recommended status for me. It never “broke character” or felt incorrect. It amused me and made me happy to see two people who truly fell in love get the ending they so richly deserve. B+

→ Jayne
Previous article: Wednesday News: Its all about the benjamins
Next Post: REVIEW: Blade Song by J.C. Daniels