In his follow-up to the New York Times bestselling Every Day, David Levithan, co-author of bestsellers Will Grayson, Will Grayson and Nick and Norah’s Infinite Playlist, tells the based-on-true-events story of Harry and Craig, two 17-year-olds who are about to take part in a 32-hour marathon of kissing to set a new Guinness World Record—all of which is narrated by a Greek Chorus of the generation of gay men lost to AIDS. While the two increasingly dehydrated and sleep-deprived boys are locking lips, they become a focal point in the lives of other teen boys dealing with languishing long-term relationships, coming out, navigating gender identity, and falling deeper into the digital rabbit hole of gay hookup sites—all while the kissing former couple tries to figure out their own feelings for each other.

In the author’s note at the end of this novel you say the following:

“On September 18, 2010, college students Matty Daley and Bobby Canciello kissed for thirty-two hours, thirty minutes, and forty-seven seconds (longer than the characters in this book) to break the Guinness World Record for longest continuous kiss. I am just one of many people who were inspired by what they did”.

The story was inspired by what they did.” 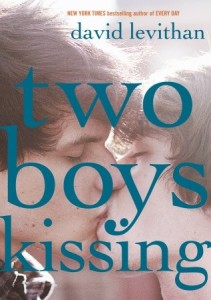 This was an unusual book. The narration in this book is by a chorus of gay men who died from AIDS watching the gay teenagers of today’s generation. They worry about these kids, they reminisce about their own past and their best and worst moments, and they hope that these kids, these teens will pull through and have better lives.
The main focus of this book is a record-breaking kiss that high school students Harry and Craig are planning which serves as a spotlight for several other couples; one is just starting a relationship and one may be on the verge of the possible break up. And there is also more somber storyline about a teenager who is on the verge of possible suicide

This is definitely a book with a message, a very loud and very unapologetic message. One reviewer at Amazon basically called this book preachy, but added that because this is a message she supports, she did not care. I am pretty much in agreement with her, but at the same time I am not sure if the word “preachy” is the right one for me. It does have a message, a very simple, obvious one – that every gay kid, gay teen and gay man is deserving of love – and this is a message that I of course also support. But the book also tells a story, so I am conflicted about the word “preachy”. It moralizes for sure, but in such beautiful and moving language that I really loved it.

The story also made me choke up several times, but here reader reactions may differ. This is a book where I highly recommend getting a sample first. I am saying this as a reader who does not read many samples, but if the style does not work for you, you may have more of an issue more than with other plottier books. Here are some examples for you which in my opinions are very indicative of the tone in the book.

Don’t make him leave you, we want to tell Mrs. Kim. He doesn’t want to leave you”

“Eventually Harry will leave Craig curled on the couch. He will tuck Graig in, then tiptoe back to his own room. They will be in a separate places, but they will have very similar dreams.

There is really not much that happens, plotwise and most of the characters while sympathetic and likeable, are not very fleshed out. But I do not think this was the point of the book. Was the point to portray a connection between the generations , using both the similarities and differences and to issue a cry out that everybody deserves of love and that every boy or man deserves to live his life as he was destined to and not to feel such hopeless despair as to want to end his life?

I cannot be sure, but as I said, while the message of this book was pretty obvious, it worked for me.

I think if the author wanted to write the love story of any of the couples in this book in more details, I would buy that book in a heart-beat. I especially would have loved to see where the story of Ryan and Avery would take them. Avery was a transgender gay teen, and I appreciated the author including the transgender character in the book. He just seemed like a character with such an awesome potential and he had great chemistry with Ryan. That was another amazing thing about this book – all the couples showed great chemistry which I do not see that often in the many m/m romances I have read.
I guess I also have to admit that I felt a little uncomfortable because even though the author insists in the note at the end that the characters are not similar to the boys who beat the kissing record in real life, he also talks about talking to one of the boys about what it was like during the time of their kiss and I started to wonder just how much fiction and reality was mixed up together in this one. Of course writers are always inspired by real life events and people, but I think to a certain degree this fictional book read like a non-fiction to me.