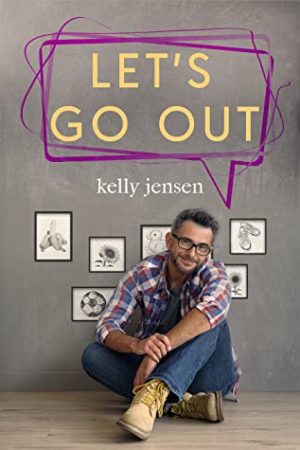 Let’s Go Out is book 2 in your Let’s Connect series, originally published in serial format and available to your newsletter subscribers. After the story is completed in the newsletter, you then publish it for sale to everyone. The final version has a bonus epilogue not available in the serial format.

While not strictly necessary, I do think the reading experience in Let’s Go Out is richer if one has read Let’s Connect (the first book) beforehand as one of the MCs in this book features strongly there too.

In the first book, Robin “connected” with Dan over a dating app. They never met in person but had a series of remote “dates”, watching a movie or cooking a meal for example and texting each other or talking by phone. Dan ended up with someone else (spoiler alert). Robin wasn’t terribly broken up about that; he was happy for Dan to have found the right man for him, but it also highlighted to him that he was lonely and wanted a relationship.

The only problem with that is that Robin has been basically a shut in for the past three years. His previous relationship ended and there was an “event” which involved his beloved dog and after that, Robin started getting panic attacks when he tried to leave the house. He had little motivation to do so anyway, being naturally an introvert and a solitary type of person and already dealing with longstanding anxiety. He works remotely as an environmental architect for a game developer and his next door neighbour’s teenaged son has been running errands for him and picking up his groceries. He doesn’t really need to go anywhere.

But now something has changed and Robin realises that if he wants to actually connect with someone, in the way he really wants to, he has to “go out”.

I don’t know that Robin was agoraphobic as such. I don’t know enough about the condition to make that judgement. He’s not identified specifically that way in the book and I didn’t read him that way FWIW. Robin’s preexisting anxiety condition was always going to remain a factor in his life. It predated what happened three years earlier and is going to persist beyond the timeframe of the book. Robin wasn’t “magically cured” by the end of the novella but he had made significant gains. There was a balance between “I’m always going to be anxious, not terribly social and there will be days I can’t go anywhere” and “I can do this, I can be in a relationship and contribute and go out both with you and on my own”.  Ultimately I read it that in the cost/benefit analysis between staying in and going out, the balance ultimately changed enough for Robin so make a start, and from there, to keep going. That made sense to me but I’m don’t pretend to be an expert in mental health representation either so there’s that.

I did feel that Robin’s mental illness was sensitively rendered and I liked there was no magical cure. People with mental illness deserve HEA’s too. Of course.

Sean lives next door to Robin’s townhouse. They share a wall in fact. They’ve known each other for about four years but after Robin’s relationship ended, Sean’s efforts to be a good friend went unanswered. Sean and his teenaged son, Kaleb come over to Robin’s every Thanksgiving but other than that, Robin only sees Kaleb really. (Robin has a good friend and work colleague and they’re in regular contact as well.)

Sean is a Black man whose partner left him shortly after they adopted Kaleb when Kaleb was six. Kaleb is now 17. Sean is an artist, working mostly in mosaics but is branching out into wire and metal sculpture.

When Robin begins to venture “out” – at first only to his backyard – he and Sean start talking (through a knot in the fence) and texting. Robin gradually realises that he wants to see Sean. So he slowly, painfully works up to being able to do so by setting himself a series of daily or almost daily challenges. Some days he does better than others but he keeps trying.

The book is told, apart from the epilogue, from Robin’s perspective. I got a good sense of who Sean was; still, it was very much Robin’s story.

I read the whole thing in one evening, which for me right now is a bit of a miracle and it says something about how taken I was with the characters and how invested I was in Robin and his HEA.

There’s a sweet charm to the novella that was comforting and a welcome acceptance of Robin in both the narrative and by Sean and Kaleb and Barrett, Robin’s friend. Dan, from the first book, is in the story too and his platonic friendship with Robin is advanced. It was nice to see the expansion of Robin’s world. It was still cosy and fairly small but Robin slowly reconnected with his environment outside of the pixels he put together for work and in doing so, he reconnected with himself. I liked that Robin’s motivation wasn’t only for Sean but for himself too. I think it would have placed too much of a burden on Sean otherwise.

Sean challenges Robin from time to time but in ways that Robin responds to and Robin decides what steps he will and won’t take. There’s tacit agreement that for the pair to be successful in a relationship however, Robin is going to have to be able to go “out” at least sometimes. The thing is, Robin wants to do this so I was okay with it.

Sean was very sweet and Kaleb too. I liked all of the characters in fact.

The book is kind of interior and close, gentle and sweet with a little bit of sizzle too – older MCs can get it.