Several years ago I fell in love with Jeannie Lin’s Lotus Palace novels. Whether you consider them romances or mysteries (I think of them as romances), the setting, a pleasure quarter called the Pinkang Li, part of the Tang Dynasty capital, Chang’an, during the 840s CE, is beautifully rendered and immersive. It serves the backdrop for two gorgeous, romantic novels in the series, The Lotus Palace and The Jade Temptress and now for two more books.

One of the fascinating things about the setting—among others—is that it shows just how much more advanced China was during this time than many societies to its west. There was a power structure of administrators within the government and in The Lotus Palace we saw how Huang, the hero, though a member of the nobility, had to study hard and pass the imperial exams in order to attain a position there. His younger sister, Bai Wei-ling, known to her family by the diminutive Wei-wei, helped Huang with his studies and later facilitated his romance with Yue-ying.

Wei-wei’s own love story is told in two books, a novella of approximately 100 pages titled The Liar’s Dice, and a full-length (320-page) sequel novel, The Hidden Moon (You can find Jayne’s reviews of these books, as well as DA reviews of Lin’s earlier novels, here).

The Liar’s Dice begins when Wei-wei decides to pay a visit to the Pinkang Li. Wei-wei is by her own admission spoiled, and she decides to do something with her envy of men’s freedom. Venturing into the pleasure quarter dressed in her brother’s clothes is her act of rebellion.

Wei-wei enjoys the pretty lanterns, the hum of conversation and the smells of appetizing foods, but on her way back to her conveyance she gets lost. A man calls after her, thinking she is Huang, but as he gets closer he sees through her disguise. He introduces himself as Gao. 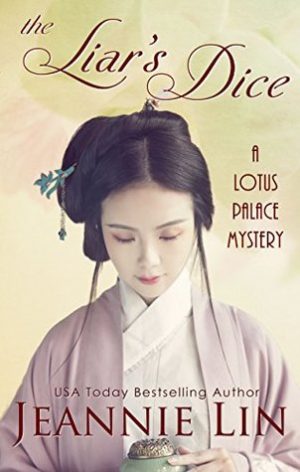 Wei-wei is attracted to the stranger, even though most people of her class would not consider it appropriate. Then Wei-wei and Gao hear a cry for help from an alley. Moments later, they find the man who cried out, dead.

Since they were near the site of the killing when Gao mistook Wei-wei for Huang, Wei-wei worries that her brother might be connected to the murder. She sneaks back to the Pinkang Li the next day and teams up with Gao to solve the case so as to prove to herself that Huang had nothing to do with it.

This novella was pretty good, but it didn’t engage me as deeply as The Lotus Palace or The Jade Temptress. I had some difficulty getting used to the first person narration and I’m not sure why—maybe just because I’m used to third-person, alternating viewpoints in historical romances or (more likely) because I wasn’t that hot on Wei-wei. This straightened out around a third of the way in, though.

Compared to Yue-ying and Mingyu, the heroines of the earlier books, Wei-wei is privileged. While I sympathized with her chafing at her cloistered life and her desire for freedom, my inevitable comparison of her to the other heroines in the series made my sympathy more philosophical than visceral. The contrast highlighted how much less adversity she faces, how sheltered and spoiled she is relative to them.

Gao is a more interesting character but in this novella I didn’t feel I knew him. He is rough-hewn and tough (I don’t want to give away too much about his background or his job here since Wei-wei doesn’t discover these things right away). In this novella I couldn’t see how he and Wei-wei fit together (happily I didn’t feel that way by the time I reached the end of the second book). There was a scene in which he and Wei-wei share fried cakes together and Wei-wei tells him her favorite story, a tale that parallels her own life and desires, that I really liked.

The mystery does not have high stakes since I never believed for a minute that Huang was guilty of the crime and the murder victim wasn’t someone I cared about. The romance is just beginning here so the the story was open-ended. I loved revisiting the Pinkang Li and how immersive an experience that was. I loved seeing Huang again. My appetite was whetted for the next book, so I’ll give this one a B-.

Gao and Wei-wei’s romance continues in The Hidden Moon and this one was much stronger. The story here concerns a body that washes up in the river. A street boy, Fu Lin, finds a jade object on the body that he turns over to Gao. Wei-wei, once again braving the Pinkang Li (this time on a half-errand, half-excuse) runs into Gao and identifies the object as an imperial seal. Together they turn the seal over to the magistrate. The theft is covered up, though, and with Wei-wei’s encouragement, Gao decides to investigate the murder on his own, in parallel to the official investigation. 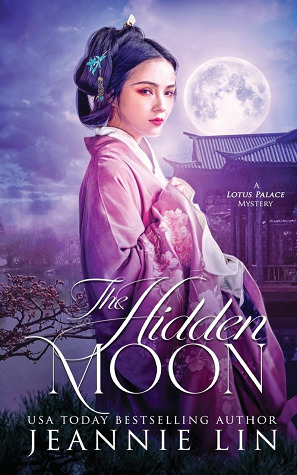 With help from Wu Kaifeng, Chang’an’s former head constable and hero of The Jade Temptress, Gao figures out where the dead man was thrown into the water and he brings that information to Magistrate Li. He suggests a means of trapping the mercenaries. One of them is captured but kills himself in custody.

Wei-wei’s brother Huang is also looking into the mystery. He’s unhappy when he learns of Wei-wei’s involvement but so long as she follows the rules and stays at home he welcomes her help.

The romance between Wei-wei and Gao faces an even greater obstacle; Wei-wei’s family expects her to enter an arranged marriage soon. She has postponed this duty as long as she could because she doesn’t think it likely that the man she marries will approve of her scholarly bent or permit her the freedom that she craves. Just as importantly, she is growing to care more and more for Gao. But does she really have a choice?

Though unlike The Liar’s Dice, this novel is told not in Wei-wei’s first person POV but in alternating third person viewpoints, I still had difficulty engaging with Wei-wei at first. As I said in my thoughts on The Liar’s Dice, she’s a bit spoiled compared to others around her, including Gao. But she grew on me, and I think her fear of being forced into an unhappy marriage was part of that.

I liked Gao a lot. Despite his shady background and profession, he has a good heart and a soft spot for Wei-wei—a soft spot that grows into a steady, open love. He’s not only drawn to her sexually and emotionally, but also has a genuine interest in her life, her dreams, her thoughts and her desires. Despite his pragmatism he falls deeper and deeper, even knowing that she will always be out of his reach. Though he tells himself that he can never have her, he can’t pull himself away from his need for her. This aspect of the book is romantic with a capital R.

The mystery here is much more absorbing than the one in The Liar’s Dice, with higher stakes (the fate the empire hung in the balance) and greater complexity. I loved some of the twists and turns, such as Fu Lin’s role in the story, and it was great to see more of Huang, Yue-Ying, Mingyu and Kaifeng again. They are used effectively and none of their appearances feel like prequel baiting.

I guessed who had committed the crime well in advance of when it was revealed, though I was off about some of the details that pertained to that. I wish I’d loved Wei-wei to the degree I loved the other characters in the series, but I did come to like her more and more. I could not guess how the class difference between Wei-wei and Gao would be bridged strongly enough for Wei-wei’s parents to permit their marriage before it happened, but when it did, not only was it convincing but it also fit the story and the characters beautifully. B/B+.