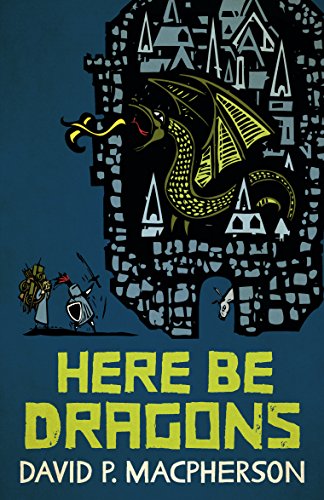 A mid-life crisis, a castle gardener, an unfaithful steed, a dastardly hero, a merciless king, and a dragon that needs saving. With heroes this bad who needs villains…

When Orus graduated from the Cromalot School for Heroes he was ready for a life of glory and adventure. But after being seduced by his first damsel in distress, he quickly learns the heroing life doesn’t bring in the steady income required to raise a family.

Twenty years later, with his son all grown up and his waistband all grown out, a favour for a friend gives Orus one last shot at the life he always wanted. But any old hero can slay a dragon, this old hero has to save one.

Perfect for fans of authors such as Sir Terry Pratchett and Douglas Adams, Here Be Dragons is an action packed, comic fantasy full of unexpected heroes, dastardly villains, chases, escapes, questionable employment practises, ill-fitting trousers and an ill-tempered donkey (as if there was any other kind).

It was the cover of this book that lured me in. “Hey, that looks cute,” I thought. The blurb appeared to be equally cute if not cuter and I settled in for an older hero with an expanding waistline (kind of like me these days). Though Orus and Mavis have been in love and married for twenty years, and Orus worries about Mavis while he’s on his quest, this is more a fantasy, road adventure with no romance. Though I do like how a young Mavis solved her kidnapping problem.

So here we have a heroic quest journey that turns the genre on its head. After a fast start in the hero business, Orus is now older, a little wiser, a father and loving husband and the palace fix-it man. He’s also got a man chest with all the bits and bobs that men see and think might be useful some day. When an older former hero asks for a favor – just a little journey, nothing big – Orus thinks this could be his chance to break back into the business. He can still do it. Right?

With his friend’s ornery donkey Thunder along to help carry the man chest – and make cynical, snide internal comments to himself – Orus sets out. Who he finds to go with him is not who he thought. Ambrose is a novitiate of the Dragon Monks and puppy-dog enthusiastic in that way that only a pimply teen who doesn’t get away from the chores and classes to see the world is. Thrilled to be going on a quest with a Real Live Hero, Ambrose is bouncy and garrulous and craning his head to see everything.

Every adventure story has to have villains and this one has some doozies. Between a faux “hero” more concerned with his hair and wardrobe – who also has a gargantuan entourage with him – and a bully, thug King with fists the size of boulders this quest is going to be a lot harder than either Orus or Ambrose imagined and they had imagined a lot.

Can they escape a camp full of “heroes” determined to kill the last dragon in existence, overcome a forest full of obstacles, a town full of drunken fighting brawlers, escape a flaming funeral ship, and brave the three challenges which will determine if they will be allowed into the dragon hatching grounds? Well, they’d better or the world will end.

This one was a teensy bit slow at the start but once Orus hauls out his man chest, loads up Thunder, and gets on his way, it picked up steam to a fantastic finish. I had fun imagining one of the villains as Chris Sarandon and loved the fact that Orus isn’t the standard, muscled He Man hero. The head of the Dragon Monks is a hoot and the Guardian of the dragon hatching grounds proves you shouldn’t be sexist in your expectations of who is in charge. The humor is subtle rather than splashed around with a fire hose and Orus does get to prove to one and all that the contents of a man chest will eventually come in useful one day. The villains get their just desserts in appropriate ways, Thunder is finally acknowledged and Orus gets back home to the woman he loves. This is an all around satisfying and fun adventure. B+