REVIEW: Far From the Madding Crowd by Thomas Hardy 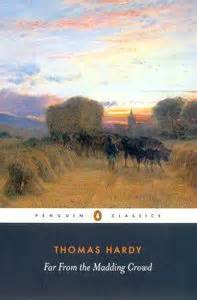 Once upon a time (more specifically, late 2010), my quest for self-improvement led me to Thomas Hardy. “Self,” I said to myself, “you’ve been trying all sorts of classic authors, you’ve tackled a few Russians. But you’ve never read Thomas Hardy. Why not give him a shot?” So I did. I don’t remember the process of elimination that led me to my fateful choice; I only remember thinking that I knew enough about Tess of D’Ubervilles to be fairly sure that it would piss me off. I ended up reading Jude the Obscure.

Big mistake. HUGE mistake. If ever a book perfectly combined soul-crushing boredom with spirit-withering depression, it’s Jude. Man, that book was boring. Man, that book was depressing. (“Done because we are too menny.” Shudder.) How does a book simultaneously manage to be both incredibly dull and astoundingly grim? I don’t know. But that book managed it. I hated it. (Strangely, looking at my log, I still gave it a C, which either means I was a REALLY easy grader five years ago, or more likely I feel like an asshole giving bad grades to classic works. I mean, clearly I’m the problem for not better appreciating this very boring, very depressing classic work of literature.)

Anyway, where were we? Recently I got it in my head that I should give Hardy another try. I remembered that back when I bitched to anyone who would listen about Jude the Obscure, a friend insisted that I should read Far From the Madding Crowd. So I did.

Our main characters are Gabriel Oak and Bathsheba Everdene. At the beginning of the novel, Oak is a shepherd who lives very simply and saves for a better future. He meets Bathsheba when she comes to the area to live with her aunt. They form something of a friendship, but when Gabriel proposes, Bathsheba turns him down. She doesn’t have feelings for him and has a desire to remain independent. She’s also proud and seems to see herself as above Gabriel, though she’s also very poor. Soon after, she leaves town, and Gabriel suffers a reversal of fortune: all his sheep die and his plans for a more comfortable future go up in smoke.

The two meet again in Weatherbury, where Bathsheba has inherited an estate from an uncle, and Gabriel is looking for work. Despite some initial discomfort between them, Gabriel ends up hiring on as Bathsheba’s shepherd, and does an excellent job.

Meanwhile, Bathsheba has another suitor, a handsome and wealthy but rather uncharismatic farmer named Boldwood. Boldwood is drawn to Bathsheba after she sends him a valentine on a lark. Boldwood takes the valentine far more seriously than Bathsheba intended it, and falls desperately in love with her. Bathsheba, to her credit, does feel terrible about leading Boldwood on, but she doesn’t have any more desire to marry him than she did Gabriel. She wants to run her farm on her own, making her something of a rare specimen of womanhood to the locals.

However, eventually Bathsheba’s head is turned by the dashing Sergeant Troy, who anyone can tell is bad news. For one thing, he’s already been seen trifling (apparently) with Fanny Robin, a young woman who was briefly in Bathsheba’s employ before running off. Even Bathsheba seems to know that Troy is no good, but she’s drawn to him anyway.

For whatever reason, Far From the Madding Crowd was a lot less boring to me than Jude the Obscure. (It was also nowhere near as depressing – though it has its moments – but the reasons for that are less obscure.) I think the prose and the characters were both less ponderous; Far From the Madding Crowd was originally published in serialized form and the writing reflects that. It’s not cliffhanger-y, necessarily, but there’s a degree of dramatic tension that I don’t recall there being in Jude.

Hardy had quite a fondness for rural life, and at times I did skip over paragraphs lovingly detailing the hay ricks (note: I have no idea what a hay rick is) and the countryside and the dew on the leaves and blah blah blah. I like his writing better when he’s recreating the local dialect in the voices of the workers who populate the area and work for Bathsheba and Boldwood. I often didn’t understand entirely what they were talking about, but the general flavor usually came through.

Bathsheba is sort of a mixed bag as a character – on the one hand, she’s sympathetic as a woman trying to make it in a mans’ world and deal with the expectations and limitations that are forced on her. On the other hand, it’s hard not to see her as flighty; she spurns two good men in favor of one bad one. Hardy’s views on the essential character of women weren’t exactly advanced, I don’t think, and Bathsheba as a character reflects that.

The three men drawn to her each manage to be sympathetic: Gabriel Oak is the pattern card of an upstanding, hardworking, loyal and steadfast man. His last name is a good indicator of his character; he’s solid and sturdy and also a bit unbending. Sure, he’s no romance hero: he’s not dashing or tempestuous in his passions. But it’s clear from the beginning that he’s a good guy. Boldwood seems to have some similar traits: steadiness of character combined with a somewhat uninspiring personality. But his mad pursuit of Bathsheba reveals some hidden depths. On the one hand, his doomed loved for Bathsheba gives Boldwood an air of tragic romanticism; on the other hand, it reveals him to be, well, kind of crazy.

Troy was the one who managed to surprise and intrigue me. I didn’t like him; he’s too selfish and shallow for that. But he could easily have been a cardboard villain, and he’s not. In some ways, in his pursuit of the easy life and comfort, Troy ends up being his own worst enemy.

The ending of Far From the Madding Crowd has a certain rightness to it, a symmetry that I found pleasing. It’s not super-romantic but it’s a far cry from the dreary despair of Jude the Obscure. My grade for this one is a B+.