REVIEW: Falling From the Sky by Sarina Bowen

This book has been republished and is now available. Sorry readers!

Your books have been  one of the highlights of my 2014 reading year. Your character seem so genuine and real and I feel like they are people I would enjoy spending time with and I certainly enjoy reading their stories. Hank “Hazardous” Lazarus  is a bit of a male counterpart to the heroine in The Year We Fell Down.   After a bad crash in the half pipe, US Olympian and freestyle snowboarder Hank ends up in the hospital unable to move his legs.

Doctor Callie Anders met Hank when he was at the top of his career[FN1] and he dismissed her with a look. He doesn’t remember the encounter but Callie has never forgotten him. When they meet again, he’s a patient.

Hank Lazarus was in for a shitty time, truly the shittiest time of his life. the distance he’d come these past five days was a descent from the highest tide to the lowest low. And it wasn’t a damned either of them could do about it.

“Hang in there,” Callie whispered. “This right here is the very worst part.”

He didn’t break their staring contest. “You promise?” he rumbled, his voice pure whiskey and smoke. 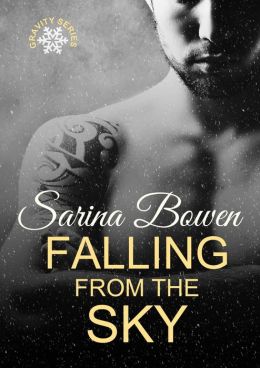 Fast forward nine months and Callie’s dealing with the break up of her ex, a fellow doctor who she allows to walk all over her, and Hank is dealing with his continuing paralysis. He has sensation in his legs but he can’t control them and he’s wheelchair bound with his wealthy parents still scrambling to find any specialist who can get Hank on his legs again.

A vist from an old friend leads to over imbibing alcohol which lands him in the hospital for alcohol poisoning where Callie and Hank meet again. Hank’s struck by her good looks and nice rack and a fervent desire to be discharged. Callie’s overwhelmed by her continuing attraction to Hank.  With his family on him to try FES, an experimental therapy that could help Hank walk again, he agrees so long as Callie administers the program which she resists because she’s not a rehab doctor. You do a good job of walking us through why it’s okay for Callie to be in this position (basically hospitals would allow clowns to administer a study if it meant millions in donations). Callie’s only role is to observe and collect data from the FES patients to help prove to insurers that FES is a viable form of therapy worth paying for.

The flirtation between Hank and Callie is charming and while much of the story is propelled by Hank’s involvement in FES, the “cure” is almost secondary. Part of Hank’s dilemma is that some organs aren’t working properly, not even with the little blue pill. This has less to do with his physical condition and everything to do with his big head. I don’t remember many books, if any, that feature this problem and it was treated not only with delicacy but a light touch, as is most of the book. The emotional impact of scenes linger well after the “big moment” because of how subtle the movements are.

The two characters come together and then their emotions careen elsewhere. Callie gets bogged down in her seventeen year plan, a potential job in California, her possible ethical conflict in sleeping with Hank, her insecurity. Hank has moments of insecurity, frustration over his situation, general malaise over how greatly his life has changed, his insecurity.

Because none of the issues are overplayed (or at least not played for hyped up drama), it is all the more affecting in part because I can visualize these two characters and their circle of friends. The crisp air of Vermont and the antisceptic smell of the hospital and the warmth of Hank’s bedroom were all easy to visual.

The ending brought the book full circle, filling me with a general sense of happiness and contentment. Callie and Hank overcame their issues and were stronger together. It’s a great book to read now, while the winter is at our door and the snow is falling outside the windows. Hank loves the snow so much and it’s evident in the way he talks about it, how he views it, how he allows us to view it and there was something truly romantic and beautiful how it was brought to life for me, the reader. This book had one of the best epilogues I’ve read (no babies) and I can’t wait for the next Bowen book because I’m sure it will be full of tender romance, real characters, and a genuineness I have a hard time finding in lots of other books. B+

[FN1] This seemed like one thing in the beginning but become something wholly different in the end and I loved that detail.

→ Jane
Previous article: REVIEW: Soulprint by Megan Miranda
Next Post: REVIEW: Tell Me Again How a Crush Should Feel by Sara Farizan