REVIEW: Tell Me Again How a Crush Should Feel by Sara Farizan

Your LGBT-themed YA novel, Tell Me Again How a Crush Should Feel, came to my attention thanks to this post at The Book Smugglers. 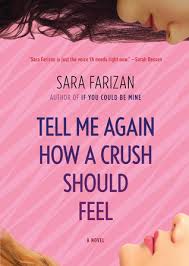 Leila Azadi is a sixteen year old student at Armstead Academy, a private high school in the Boston suburbs. Leila, whose parents immigrated to the US from Iran, spent the summer following ninth grade at a camp where she met Anastasia, a girl with whom she had a few makeout sessions. Anastasia then decided she liked a boy, but for Leila their brief relationship clarified her attraction to girls.

Now, at the beginning of her sophomore year, Leila hasn’t told anyone about her orientation, and she is afraid she’ll say or do something to give it away. She hides her crush on her English teacher, Ms. Taylor, and doesn’t tell anyone that she doesn’t find the “hot” science teacher, Mr. Harris, particularly attractive.

Leila’s friend Greg is really into her, even though she’s told him they can only be friends. Leila’s other friend Tess has a thing for Greg, but doesn’t want to poach on what she believes is Leila’s turf.

Then there is Lisa, who used to be Leila’s best friend years ago. Lisa is part of the in crowd now, and most of them are jerks. But Lisa hasn’t been the same since her older brother died a year before, and sometimes, Leila wonders if she should try harder to reach out to her.

Into this delicate period in Leila’s life comes Saskia, a new girl. Saskia is most recently from Switzerland, where she lived for five months; she and her parents have a jet-setting lifestyle. She is also unusually poised, dresses differently than anyone else at Armstead Academy and “looks like she just walked out of a Garnier Fructis commercial.”

In contrast, Leila knows herself to be curvy, unathletic, and awkward. She doesn’t feel she measures up to her slim older sister, Nahal, a pre-med student at Harvard whose choice of major and academic success pleases their parents. Leila struggles to get B grades in science, and feels directionless in contrast to Nahal and to some of the competitive kids of her parents’ Iranian-American friends.

What’s more, Leila has observed that a couple in her parents’ circle have cut off their son after he was seen kissing another guy. Leila isn’t certain that her parents won’t react similarly if they learn the truth about her. And yet, Leila is drawn to Saskia like a moth to an open flame. Saskia is unpredictable and clever, and unbelievably, she seems to like Leila. But does she want Leila for a friend, or for something more?

I had fun reading this book. Leila is a loveable character, kind and funny. We see her sweet nature in her attempts to reach out to the grieving, standoffish Lisa, to encourage Tess to pursue Greg, and to comfort Ms. Taylor when the latter needs it.

Leila also cracked me up multiple times with her sense of humor. In one hilarious scene around the family dinner table, Leila imagines her sister Nahal as a successful doctor:

Mom is smiling giddily, no doubt envisioning her daughter in scrubs, rushing around performing complicated, miraculous surgeries and still being home at night to see the perfect kids she’ll have with her perfect husband. They’ll all play board games together on weekends, set up low-key barbecues, maybe have golden retrievers named Rusty and Scout. Whenever I go over to visit my sister and her dashingly handsome and successful husband, they’ll ask me what I’m up to, and I’ll tell them I’m feeling pretty good since I moved into a bigger box off the side of the highway. Much better digs than that dump in the Store 24 parking lot.

Later in the book, while hiding in the bathroom and talking on the phone about her problems, Leila has another of her many witty observations:

I spot an ant walking across the floor of the bathroom and I think, You lucky so-and-so. I bet you don’t have these sorts of issues at your colony.

Another thing I loved about Leila was how real she is. Like many a teenager, Leila feels like a bundle of insecurities, unaware of how much courage she shows in multiple situations. She wants what every kid her age wants – the freedom to be herself and be liked and accepted for who she is.

The rest of the characters are also believable and lively for the most part. I think my favorite may be Nahal, but I also delighted in the gay and somewhat narcissistic Tomas, with whom Leila works on a theater project. Lisa, Tess, Greg, Ms. Turner and Leila’s mother were also appealing.

Saskia is the only one who was only 90% believable. She does some outrageous things and I would have liked to see her in a moment of vulnerability, but it’s a credit to the writing that I suspended disbelief enough that her actions had a powerful effect on my emotions.

I should add that the cast of characters is diverse. Several characters are POC, LGBT, and/or non-Christian, and for what it’s worth, I didn’t feel any of them were stereotyped.

The book is less of a romance than the cover image indicates—it’s more accurate to say that this is a novel about a teenager’s coming out with a romantic subplot.

Contemporary YA isn’t my usual genre of choice – I generally prefer the YA dystopians and fantasy novels— and Leila isn’t quite as mature as the heroines of the YA’s I usually read. She also doesn’t grow that much over the course of the book, so the novel reads like a younger YA bordering on Middle Grade. It isn’t that complex, and I could see some of the plot turns coming.

But I was pleased by how readable I found the book, so I didn’t mind. At 305 pages, it’s a fast, fun read, and the combination of the breezy, humorous tone with the thoughtful subject matter gives it verve. B.