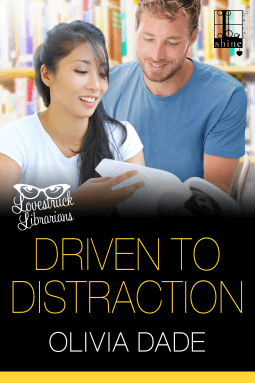 Constance Chen is not the demure kind of librarian. Sure, her high-horsepower ride is Big Bertha the Bookmobile, but Con swears a blue streak, does her own home improvement, and wears steel-toed boots. She has a tight circle of friends, a demanding, beloved sprawl of a Chinese-American family, and a strict hookups-only policy when it comes to men. Her life is just how she wants it. Except for one maddeningly sexy footnote.

Sam Wolcott, her friend’s baby brother and the library’s IT star, has been throwing sparks with Con since he moved to town. To everybody else, he’s a thoughtful, sensitive sweetheart. To Con, he’s a cantankerous pedant, because if they don’t fight nonstop their clothes will spontaneously combust. Sam needs a commitment Con won’t—can’t—give. And neither of them will chance their hard-won bonds for pure lust.

Too bad Con and Sam have a whole week in a very tiny, very private space to sustain their dumb arguments. Alone. What happens in the Bookmobile might take their resistance right out of circulation . . .

I have fond memories of the bookmobile from my childhood and the librarians who put books in my hands and fostered my love of reading. Now I wonder what they might have been up to. Hot IT guys are tropes now, right? as well as sexy librarians. So let’s cross them and watch the sparks fly.

This is book five (I think) of this series so the story starts with a conflict that seems already in place. To everyone around them, Con (stance) Chen and Sam Wolcott are hot for each other even if they do use arguments to deflect this crazy mad sexual attraction. But added to the “attracted to my besties’ relative” trope is a slight variation. Sam and his half-sister are just building their own relationship and he worries that if he presses for Con’s attention and things go wrong, Penny would pick her long standing friendship with Con over him.

Con’s and Sam’s attitudes towards long term are flipped from the usual – he dreams of starting a family while she only wants booty calls who leave before morning. Once Sam understands her limits, he strives to work within them and woo her differently – his gift box is genius. If she doesn’t want a boyfriend adding to the already crushing family responsibilities she shoulders, he will tirelessly work to share and ease her burdens.

Okay so all seems to be zooming towards HEAville but I’m picking up sings that these two still aren’t on the same page. What now? Big conflict, that’s what. And one that seems like a deal breaker. Sam and Con are both sure of what they want or don’t want. Communication earlier would have clued them in but it’s past that now with them madly in love and facing opposite desires. Finally they talk.

I was glad that neither tried to force their POV. Yes, there is questioning and done but once opinions are clear, those are accepted. Things initially look hopeless for any future until friends and family step in and help with suggestions, things to think about and the loan of a surrogate weekend child. Sam and Con truly think about this conflict and how they can deal with it. Yay! And as a woman who has also chosen to remain childless, I was overjoyed that Con’s choice is respected as she and Sam work things out. And they do work and talk and come to a clear and mutual choice that works for them. I did proceed with this book a little cautiously – an early scene in Sam’s IT department is a gobsmacking mix of gender tokenism and insult – but I finished it with delight. B+