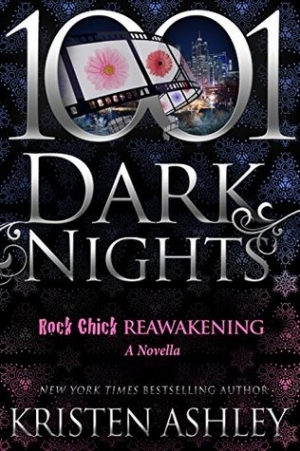 Trigger warning: Rape (not by hero)

One of my favourite characters in the Rock Chick series is Daisy. She started off, for me at least, being something by way of comic relief, but over the course of the series, she became a fully fledged character, with nuance and a history I cared about. She also taught me a thing or two about what really counts about people. Finally, I got to read about how Daisy found her HEA with Marcus Sloan, in the newly released novella, Rock Chick Reawakening.

Marcus Sloan is a shady character in the Rock Chick series, someone involved in organised crime and with a bad, bad reputation. He’s a handsome beast but the Hot Bunch have mostly wanted their women to steer clear of him. Daisy however, was fully embraced by the entire crew. But, before Daisy walked into Fortnums, before she met Marcus, her life wasn’t all that great.

Her mother was not a good woman, her dad beat them both, stole from them and ran off and there was, thereafter, a long string of men her mother took up with, all but one of whom were losers too. Daisy didn’t have much growing up but she was influenced by a lovely Southern woman, Miss Annamae, for whom Daisy’s mother “worked” briefly. (Worked is in quote marks because mostly Daisy’s mother didn’t do it very well.)

At age 19, Daisy got out of Georgia and headed west, eventually ending up in Denver and stripping at Smithies. In between she learned her craft and had a few boyfriends – one of whom paid for a very good (and impressive) breast augmentation for her. Daisy is so talented on a pole, she’s drawn more crowds to Smithies than ever before and everyone is raking in the cash.

Marcus Sloan is a silent partner in Smithies and he sees Daisy and he knows she’s the one for him. He’s just got to sort a few things out before he makes his move.

Those of us who have read the Rock Chick series know that Daisy was raped outside of Smithies one night. It’s not graphically described in the book but there is enough detail to get a clear impression of what happened and I expect it will be triggering for some readers.

After the assault, Marcus sends a huge bunch of daisies to Daisy every day and he steps in and protects her and searches for the rapist with the intention of ending him. I couldn’t find it within myself to be judgemental about Marcus’s intentions to be honest. [Insert obligatory note about vigilante justice being bad etc etc.]

It takes Daisy a while to realise that Marcus loves her and wants her for her. She’s so rarely experienced acceptance or good treatment – and hardly ever from a man, she’s very dubious. Also, she’s dealing with the after effects of a serious sexual assault which did nothing for her self-esteem.

Marcus is probably not a good man. I say probably because what he shows Daisy and gives to Daisy is all good. He’s a criminal and he does bad things. He doesn’t spend a lot of time being remorseful about those bad things. But he is all the good things to and for Daisy.

He is even prepared to watch Steel Magnolias with Daisy – though he’s unhappy when she starts crying after (spoiler alert) Shelby dies. Daisy, however, pipes up with more of her marvelous words of wisdom and smooths things over.

“This is a comedy,” I informed him.

“That’s Southern for comedy,” I educated.

Daisy is somewhat outrageous. She has a particular style she’s happy with but she’s fully aware that most people think its ridiculous and trashy. She looks a lot like Dolly Parton with a side of Peg Bundy. She has enormous breasts, a tiny waist and narrow hips, she has BIG platinum blond hair, a penchant for rhinestones (anything sparkly really) and leopard print. And Marcus does not wish to change a thing about her. He loves her for who she is and adores the way she expresses herself and every single platform sandal in her shoe closet. He doesn’t care if other people think she’s tacky white trash. He knows she’s not. He knows she’s gold.

Marcus doesn’t even object to Daisy dancing. He does put a stop to private lap dances very early but Daisy didn’t really enjoy them anyway so I wasn’t too bothered by that high-handedness. Also, Daisy didn’t lose any money on the deal. I admit this surprised me because hello alpha-male alert, but it made sense also: Marcus doesn’t see anything wrong or immoral about stripping and he knows Daisy is exceptionally good at it and, more importantly, enjoys it. And what Daisy wants, what she loves, is more important to him than anything else. When Daisy wants to stop stripping he’ll fully support that too.

Daisy has been treated badly in her life and to see her getting so much goodness from Marcus was wonderful. I basically lapped this story up with a spoon, smiling and chuckling my way through all the Daisy goodness. I stayed up way too late reading and even snuck in some lunchtime reading on my phone because I just couldn’t wait to know what was next.

His fingers clenched into my flesh suddenly and his voice was thick and astounding when he asked, “You’re falling in love with me?”

I drew in breath.

Then I lifted my head and looked down at him.

His sated gaze went guarded. “You were?”

The novella has a somewhat cheesy epilogue which flashes quite a few years ahead and gives readers a brief glimpse of where all the Rock Chicks are at and there are some things which would normally have bothered me but I was so mellow and happy by that point that I just couldn’t get too worked up about it.

I don’t think it’s necessary to have read any of the Rock Chick books to understand this novella – set, mostly, as it is, well before Rock Chick but I think there is something extra for fans of the series who will see cameos from a young Lee Nightingale, Indy and Ally, Tod and Stevie and a few other series regulars as well.

I am always and ever a sucker for a hero totally gone for his heroine and Rock Chick Reawakening delivered this in spades. Grade: A-

“I love you so much, I don’t even know what to do with all of it,” I whispered.

“I’m thrilled someone else understands that feeling.”