REVIEW: Dare You To by Katie McGarry

I definitely had my druthers about this book. In Pushing the Limits Beth doesn’t portray herself in the best light and it is clear that Isaiah, a guy who seems to be constantly saving her, is destined to be the hero. But Dare You To isn’t anything like I thought it would be and I was surprised at how much the narrative challenged me. 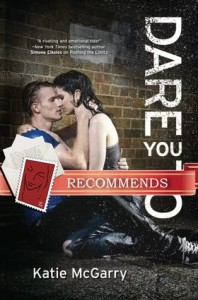 The story of Beth and Ryan is told in alternating first person point of view which is fast becoming one of my favorite storytelling methods.

Beth may be characterized by some as an unlikeable protagonist. She is cynical, mouthy, and often making impulsive, emotion based decisions.  I liked her a lot.

Worse, the hero isn’t Isaiah at all but another guy,  a baseball punk (Ryan) who I thought was going to be intolerable. Ryan’s point of view opens the book and initially I was crushed that Beth’s pairing wasn’t with Isaiah, but as the story unfolded it became so clear why Isaiah couldn’t have been the hero.  Isaiah wouldn’t have challenged Beth, or dared her, to grow and learn to save herself.  When Beth is taken from her comfort zone, she sees and experiences a world outside of her own — a world that wears better clothes but doesn’t always have a better life.  To pair her with Isaiah wouldn’t have allowed her to grow because Isaiah would have done everything for her.

Beth is busy trying to parent her drugged up, messed up mother:

Denny and I both know he won’t call the cops, but I can’t risk it. Mom’s been arrested twice and is on probation. And even if he doesn’t call the cops, he’ll kick her out. A burst of male laughter reminds me why that’s not a good thing. It’s not happy laughter or joyous or even sane. It’s mean, has an edge, and craves someone’s pain.

Mom thrives on sick men. I don’t get it.

Don’t have to. I just clean up the mess.

The feelings are raw in this book. Beth’s mother is a realistic drunk, on the one hand telling Beth she ruined her life and on the other saying that Beth can’t leave her.

She begins to cry. It’s the drunk cry. The type where it all comes out—the tears, the snot, the spit, the horrible truth you should never tell another soul. “I hate you.”

I flinch. Swallow. And remind myself to inhale. “I know.”

Mom grabs my hand. I don’t pull away. I don’t grab her in return. I let her do what she must. We’ve been down this road several times.

“I’m sorry, baby.” Mom wipes her nose with the bare skin of her forearm. “I didn’t mean it. I love you. You know I do. Don’t leave me alone. Okay?”

Beth can’t let go of her mother.  There is no other explanation for it other than the mother is the one who birthed Beth, who has been with her when her father abandoned them.  “It is, after all, my fault Dad left.”  Beth’s feelings are bound up in her mother’s drunkenness and casual abuse and her father’s abandonment.  In order to save her sister and Beth, Beth’s Aunt Shirley calls in Scott Risk.  Scott Risk is Beth’s uncle and a small town boy made good.  He spent eleven years as a Yankee.

Scott had promised to come back for Beth, that she wouldn’t have to have the same shitty childhood Scott experienced but Scott’s promises just one more in a long line of adult failures.  When he rides back into town, he unrealistically expects Beth to conform to his commands. Scott didn’t even realize that his meth head brother abandoned Beth when she was in third grade.  Worse, his new wife thinks that bringing this girl into their home is a big mistake.

The woman snaps, “That was after you said she ran away. I didn’t actually think you would find her. When you described the hellhole she lived in, I figured she was long gone. She’s a criminal. You expect me to feel safe with her in my home?”

Needless to say I wanted to punch Scott and his wife in the mouth.   Isaiah and Noah, two of Beth’s friends, want her to both forget her mother and move in with them–three foster kids trying to make a family of their own.  Beth’s uncle has other ideas and essentially blackmails Beth into coming to live with him.

Ryan is a phenom in baseball, being pushed by his father. Constantly. I’ve seen this in my own life. Kids who have trainers at the age of 9, 10, and 11. Boys whose parents try to recreate their own faded glory or achieve their own dreams through their progeny.  Ryan is that kid and so well drawn, I felt like I’ve met him down at the weekend baseball tournaments I’ve attended for years, where you go to the park at 8 am and stay there all day until dusk.

Ryan has his own complicated parental problems.

We’re carbon copies of each other, my dad and I. Sandy hair and brown eyes. Long legs. All shoulders and upper arms. Grandma said people like Dad and me were built for hard labor. Dad said we were built for baseball.

Ryan has learned, though, that is dad’s love is conditional.  You live the life Mr. Stone sets out for you and you are rewarded, financially and emotionally. You step out of line and you are excised from the Stone family tree, as Ryan has seen done to his older brother Mark.

This is not just a story about a girl from the wrong side of the tracks making it with the guy from the right side of the tracks.  This is really about both Beth and Ryan learning to be adults, make decisions for themselves, determining their own values and moral code; learning what it means to care for someone but also to be brave on their own.

But Beth is the star of this book. She’s hard on the outside, constantly pushing at people and often relying on them in ways that are hurtful (particularly Isaiah). I loved her challenging attitude.  Beth is not the innocent virgin and Scott is not the hardened sports playboy. There’s a little role reversal here. *hint hint*

The reason this book is getting such a high grade from me is two fold. First, I totally bought into a romance that in the beginning of the book I was sure I was going to hate and second, it features a bad attitude, prickly party girl who tried very hard to do what she thought was the right thing.  The ending was a little predictable and I wished it had gone in a slightly different direction, one that would have shown Beth having a little more agency and less of a reactionary response to negative events.  But, I’ll let you in on a little secret too. Our resident h8r, Jia, loved this book.  B+