REVIEW: The Enforcer by Nikki Worrell

In the past year and a half I’ve spent deep diving into the self publishing ranks, I’ve read my share of really poorly written books but for the most part, I think the quality has improved. I think what caught me off guard about this book, however, was how much I wanted the book to work for me given the elements. This was a sports romance featuring a not super attractive guy who was kind of a beta (but still possessive) and a curvy, smart heroine who wasn’t afraid of her own sexuality. 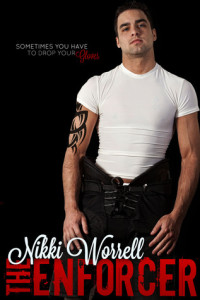 However, the writing style was so offputting that it took me several attempts to finish the book and I did so only for the purpose of the review. Lacey lived in Moosehead Lake, Maine, and was about to be married to Steven somebody who was a concert pianist. She finds him boffing a bridesmaid in the pool house directly before the marriage was to begin. Breaking it off, she decides to move to San Diego to be with her friend, Zoe who is a psychologist for the NHL hockey team, the San Diego Scorpions.

Immediately upon moving out there, Lacey falls for the new acquisition of the Scorpions, Jody LaGrange, an older player who holds the enforcer position. Jody’s reciprocal feelings are just as immediate however Lacey isn’t ready for a serious relationship given how her most recent one fell apart. She is, however, willing to engage in a fling with Jody. Jody accepts this but secretly plots to turn her feelings into something more permanent.

Plotwise, the story is predictable. Steven can’t let go. Jody is a protective and possessive guy who plays The Enforcer on the hockey team but is largely sweet and understanding. Most readers will be able to write the arc of the book themselves. While the characters think a lot about the consummation of their relationship, it actually doesn’t happen until much later in the book so I’d categorize this book as more on the sweet side. I kind of appreciated how the two dated and got to know each other before falling into bed.

But it isn’t the predictability of the story that made it unreadable or the slowness of the developing romance. It was the writing.

Ongoing research studied the effect of concussions on the brain in the long term. One study concentrated on the correlation between concussions and depression. That was just one of the reasons that Zoe took the job. She wanted to be able to help the players deal with any depression caused by concussions.

Of course concussions weren’t the only trigger for depression. Anyone who had a job that entailed being away from their family so much could be a target for depression. Hockey was a physically and mentally stressing game that came with a brutal traveling schedule.

Lacey wasn’t sure if she was ready for this big of a change. Could she really just pick up and move all the way across the country? She decided to give Zoe a call to talk to her about it.

There was an extensive use of parantheticals and ellipses.

Her 2010 black Audi R8 was the most gorgeous car on the planet. By using some of her inheritance as a down payment, she was able to buy that two-year-old beauty for a reasonable … well … she could afford it, okay? Yes, it was a bit elaborate, but good Lord … that baby had a V-10. That was 420 horses. They should call ‘em kittens because Rosie sure did purr. With her six speed manual transmission and all-wheel drive, she was great in the snow. Okay … not so much. But where her gas mileage was concerned … well, that didn’t need to be mentioned either.

And constant, in paragraph, head hopping.

Jamming away to some Aerosmith, she didn’t notice the car creeping up along side of her. It followed her for half a block before pulling over. The driver jumped out and followed Lacey for a bit, thankful that she couldn’t hear him. She smelled like oranges today. God he missed that. He just wanted to get close to her again. Why couldn’t she understand that? If only she would give him a chance to explain. He was so close he could almost touch her, but he needed to bide his time. This wasn’t the right time to tell her that he’d found her.

There was a lot of hockey in the book and most of it seemed quite authentic even if it is related to the reader through the device of taking a non fan to a game and explaining everything to that person. I can take a commonly used plot, commonly used plot tropes, commonly used characters; what I can’t take is constant headhopping and non stop narration. Even the dialogue and texts between the characters came off stilted and juvenile. Jody and Lacey’s interactions sometimes felt like they were occurring between preteens. I wish I could have even been inspired to write a funny review, but I used up all my energy just finishing this book. D

→ Jane
Previous article: REVIEW: Dare You To by Katie McGarry
Next Post: Out on the Border