After twenty-five years of conflict, the IRA and the British have agreed an uneasy ceasefire, as a first step towards lasting peace. But if decades of savage violence are leading only to smiles and handshakes, those on the ground in the border country will start to question what exactly they have been fighting for. 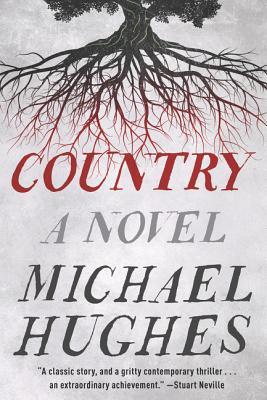 When an IRA man’s wife turns informer, he and his brother gather their old comrades for an assault on the local army base. But the squad’s feared sniper suddenly refuses to fight, and the SAS are sent in to crush this rogue terror cell before it can wreck the fragile truce, and drag the whole region back to the darkest days of the Troubles.

Inspired by the oldest war story of them all, this powerful new Irish novel explores the brutal glory of armed conflict, and the bitter tragedy of those on both sides who offer their lives to defend the honour of their country

Like Homer’s Iliad, which it is based upon, your literary novel, Country, centers on the impact of a personal dispute on an armed conflict. It’s 1996 and a ceasefire is being negotiated between Britain and the IRA. The dispute, as in the Iliad, is over a girl—in this case the daughter of Crisis Cunningham, a protestant farmer in a Northern Irish village near the border.

The narrator of the novel is unnamed but appears to know all the players; their feelings and thoughts as well as their actions. The narrator might fairly be described as omniscient, since we get multiple viewpoints but all are framed by the narrator’s introductions and descriptions.

But the narrator’s voice is steeped in the vernacular of the setting, and in that way, the narrator does not come across as an impartial observer. He (I use the male pronoun because that was how the narrator read to me) has opinions that bracket the events in the novel and to some extent color the reader’s reactions to those same events and to the choices made by the characters. There’s a gossipy quality to his narration, as if the narrator were sitting and drinking with us in a Northern Irish pub such as the one the characters frequent, eager to share anecdotes that show he’s in the loop. The narration is also humorous on occasion, as are the characters and sometimes even the goings-on.

To get back to the dispute, it appears to have sprung when Cunningham’s fourteen-year-old daughter ran away from home to take up with the leader of the local IRA cell, a man known as Pig. Pig had rented the land on which the squad plans its operations from Cunningham, but now Cunningham pleads for the return of his daughter. Pig refuses.

Cunningham then contacts a relative of his named Paul Bright, a local protestant politician with connections. Bright arranges for the water and power on the land the IRA squad is renting to be cut off and hints to the British security forces that the area’s IRA cell might be up to something.

Pig is indeed planning an operation, but the plan begins to fall apart when the local priest informs the squad of Bright’s doings and of Cunningham’s threats to reveal the cell’s location to the British. When the priest recommends that Pig return the girl to her father and apologize profusely, Pig loses his temper and—in front of the priest—insists that his men find him another young woman to take the place of Cunningham’s daughter.

The group’s most skilled sniper, a man named Achill, reminds Pig that the members of the cell avoid local entanglements while working on an operation. Achill cautions Pig to wait until after the operation has been carried out. A furious Pig suggests that Achill turn over his own young lover, Brigid, so that she can warm his bed instead.

Achill, who has an emotional attachment to Brigid, explodes. He reveals to his fellow foot soldiers that the operation originates not from the top, but from Pig’s wounded pride. Pig’s sister-in-law has left his brother, Dog, to inform on the IRA to the British, and Pig is out to avenge his family.

Pig does not back down, and Achill announces that he will allow Brigid to go to Pig—but that this will be his last action as a member of the squad. He will not fight under Pig any longer. Without Achill, the squad is considerably weakened and it’s questionable whether they can pull off the operation at all. But Pig digs in his heels and the fracture widens.

I can’t say too much about the plot of Country, because I don’t want to spoil the surprises. But the novel is an earthy, violent and tragicomic tale. Despite being firmly rooted in mid-1990s Northern Ireland, it retains most of the Iliad’s themes, including the notion of attaining glory through battlefield daring, the tragic flaws of unforgiving anger and wounded pride, and the inevitability of violence and loss as a result.

Unlike in Homer’s Iliad, though, Country has no heroes and the story does not reflect well on any of the characters. Pig is, of course, the self-serving villain, but a portion of his villainy stems from his ineptitude.

Achill is a bit more sympathetic (which is not saying much) due to his protectiveness of Pat, a young man he met while they were jailed together. Pat is sweet and soft-spoken, the furthest thing from a warrior, and Achill wants to shelter him from violence. Pat is gay and he and Achill are close enough that there are rumors that Achill is bisexual, but in fact, their relationship is more like that of an older and younger brother.

Brotherhood is a theme in the book as well; Achill and Pat’s relationship is mirrored by that of Pig and his younger brother, Dog. Whereas Achill wants to protect Pat from the insurgency and its bloody consequences, Pig tries to prod a reluctant Dog to greater violence.

The middle of the novel, where we become more familiar with the characters we’ve met only in glancing fashion until then, is the book’s strongest, most tightly-paced section. It is where our tale is peeled back layer by layer, character by character. In comparison, the third act, where everything comes together, wasn’t quite as powerful. It was as if the narrative, which had been walking a tightrope of humor, violence, and suspense, wobbled unexpectedly, though it did not quite slip.

There’s some fun wordplay in the novel, such as in this bit, where a female character describes Pig:

‘[…] He’s known as Pig, because he farms pigs and smuggles them, and because he’s very stubborn, some people say. And also, he’s a fucking pig. But the whole family has that. The da was known as Horse, because he had a big long face, and he always kept horses. And the granda before him was called Bull, I think because he had a quare temper. And probably a bull as well, I don’t know. Maybe he was always talking shite.’

One of the (many) disturbing things in the book—apparent from its opening—is that Pig desires a fourteen year old, and until it places the squad and its operation in danger, to our knowledge no characters other than her father and perhaps the priest blink an eye at it. What’s more, some of the other squad members also have teenaged lovers (it’s not clear whether these girls are above or below the age of consent).

On the one hand, this is absolutely necessary to the novel, both in serving as a catalyst to Achill and Pig’s falling out, and in making it clear to the reader at the outset these men are not to be romanticized. Then, too, after reading this book and Anna Burns’ novel Milkman, I have started to wonder if this was something that was not uncommon during the Troubles (I don’t have enough information to know, but taken together the two books certainly give that impression).

On the other hand, the girl goes unnamed, highlighting the irrelevance of her well-being to most of the characters as well as to the narrator. This too, fit the needs of the story, but it’s still troubling. Presumably this child was raped, but even if her father’s intervention prevented the rape from taking place, the intention was there. Having her voice and viewpoint would not have suited the tone of this novel, but the voices and viewpoints of raped children are so often silenced that I was uneasy about this authorial choice.

As stated before, no one is a hero in this story, even those men who don’t engage in such practices. Any time the reader is tempted to like someone, to excuse them on the basis of what they’ve suffered, the author reveals something repellant about that person. Some of the characters are cowardly, others too keen on violence. Some are disloyal, others loyal to the wrong person. Some are wishy-washy, and others still, committed to what seems to them a senseless cause for what seemed to me like senseless reasons.

Ultimately, the novel strips them all of their dignity while making it impossible to dismiss the humanity and truth in any of their portrayals. Their frailties and cruelties are at once recognizable and alienating.

The violence, therefore, is equally impossible to dismiss. We don’t mourn for these men so much as we mourn for their country. It’s the endless cycle of war that is, in the end, the real tragedy. B+.