REVIEW: Any Duchess Will Do by Tessa Dare

It’s fairly well known that I am suffering a historical romance malaise so I admit that my grade and response to this book may be disproportional to others.  I was engaged and charmed from the first chapter to the last and didn’t hesitate to put the book down once. I’d be hard pressed to say that about most books these days, let alone a historical. 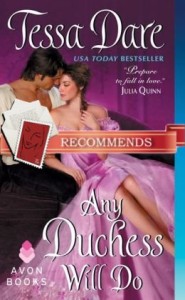 Griffin York, the Duke of Halford, is kidnapped by his mother and taken to “Spinster Cove” where he is ordered to find a woman to wed.  Judith York, the current Duchess of Halford is tired of being the matriarch and wants Griffin to do his duty.  She literally drugs him, stuffs him in a carriage and takes him to Spinster Cove where she boasts that she can turn any woman into a duchess.  Griffin chooses Pauline Simms, the waitress at the Bull and Blossom tavern.

Pauline eyed Griffin as he walked in and pegged him as some other girl’s prince. She admired his fine form and his obvious wealth but all that turned sour when he decided to play some game with her.  At first I was worried this was “make fun of the poor girl” but it wasn’t because Pauline wouldn’t allow herself to be the butt of any joke.  She pushes back, forcing both Griffin and his mother’s hands.

Whatever stubborn, unfeeling game this duke and his mother were playing, they were gaining a third player in Pauline.

Turning her gaze to the duke, she gave him a bold, unashamed inspection. No chore there. The man truly was a fine specimen of masculinity, from broad shoulders to sculpted thighs. If he could ogle her, why couldn’t she look right back?

“Cor.” She unleashed her broadest country accent as she tipped her head to admire the lower curve of his tight, aristocratic arse. “I’ll have great fun with you on the wedding night.”

When Griff is taken to Pauline’s home, his conscience begins to poke at him.  Not only can he see that Pauline is smart (both of wit and mouth) but she has her own pride.  Further, he sees that her father doesn’t value her much.  He offers Pauline a bargain she really can’t turn down. He’ll pay her an amazing sum of money to travel to London with him and his mother and play the role of protege to his mother’s maestro for one week.  Pauline can use that money to buy herself a small cottage and provide for her and his sister.

But once in London, Pauline is presented with a challenge. More than once she’s presented with the response that something wasn’t for her. Whether it was a book or merely looking good in a magnificent frock.  Pauline’s response is always the same.  She moves toward the challenge and not away which was exactly consistent with the manner in which she acted when Griff and Judith York first encountered her.

In this fairytale, we want Pauline to get the prince because we love Pauline. She’s not just a decent person who has tried to provide for her sister, save some money for herself, and simply try to enjoy the lot she’s been given but she’s smart and refuses to be the victim of anyone, including Griff and his mother. So is Griff good enough for Pauline?

Just follow my lead. It’s the only way to make a quick escape.”

They waltzed their way around the ballroom. Because of the way his sleeve was caught on her gown, Griff had to hold his arm jutting out like a chicken wing. Without his hand on her back, he couldn’t lead her properly. Pauline was left to chase him across the dance floor in tiny, tiptoeing steps.

At last they reached the doors to the garden.

“I’ve never seen that waltz before,” an elderly matron remarked.

“A Hungarian variation, madam.” He held open the door for Pauline. “All the rage in Vienna.”

The best part of this writing is that I’m not told that Pauline is resourceful or that Griffin is witty.  It’s shown to me in each interaction.

It’s not all funny jokes about poor dancing because Griff’s reason for not marrying stems out of a real grief, one that brings him and his mother closer together but drives him apart from Pauline.

Possibly the downside of this book is two fold.  First, some might find Pauline a bit too perfect. Not only is she pretty and self possessed, but she has only a few qualms in entering society.  Her language and speech, for a barmaid, is not at all presented as an impediment. She makes friends with the servants and is able to play Handel on goblets filled with water. In her own way, Pauline is a bit of a paragon but she was a delight to me and I thought Griffin was a perfect match for her. B+

→ Jane
Previous article: REVIEW: The Shambling Guide to New York City by Mur Lafferty
Next Post: Daily Deals: A painful memoir, a recommendation from The Booksmugglers, and an older contemporary from a new author