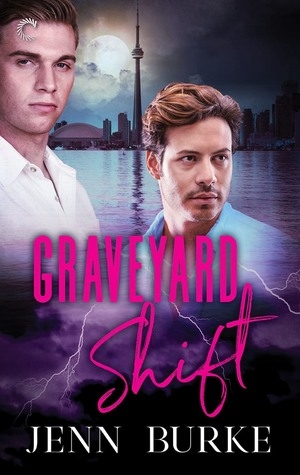 Kaetrin: Graveyard Shift is book three in Jenn Burke’s Not Dead Yet series. Sirius and I have reviewed the previous two books together and thought we’d continue the tradition with this one.

Please note spoilers for the previous two books follow. If you haven’t read them, look away now!

When Graveyard Shift begins, Wes and Hudson have moved to a larger property in upscale Toronto and are settling into their private investigation business with found-family members, Evan and Iskander. Wes’s BFF, Lexi, also is still in the picture of course and Wes has also become friends with vampire, Ren, who was introduced in the previous book. Wes is settling in to being a god, working out what that entails and how it all works.  Caballero Investigations are following a shifter who works for Ren who seems to have suddenly come into a lot of money. Ren is worried the shifter is embezzling. But, as it happens, things are far more complicated than that. Someone is killing shifters all over the city and there’s an uptick in the number of rogue vampires. Hudson’s niece, Priya, arrives suddenly on their doorstep for a visit and she’s clearly hiding something. There’s a nosy neighbour getting all up in their business, a strange paranormal being police force pops up from Europe to make a mess in Wes and Hudson’s lives and a blast from the past puts everything the pair have worked for at risk. The stakes are very high and, just a warning; have some tissues handy. Things get very hairy before the HEA.

Overall I found this book a stronger one than the previous novel, Give Up the Ghost. It’s full of action and intricately-plotted. The threat level was very high which meant a very tense read. I was impressed by that level of tension – especially because Wes is now a god and it’s hard to imagine much happening to him given his obviously enormous power. Sirius? What did you think?

Sirius: I admit I was worried about this book. I was worried that there would not be enough tension between Wes and Hudson and we will get a break up for no reason. I do agree that overall this was a stronger book which I really liked , however I am not sure if I agree that the stakes in the beginning were high.  I think to me high stakes especially in the romantic book mean that something is hurting the main characters or threatening to tear them apart. I do agree that suspense was better plotted and more suspenseful than in the previous book, I just think that for me stakes became high in the second half of the book.

Kaetrin: I agree it took a little while to get started but when I went back to try and identify exactly when, I realised that things *were* happening right from the beginning, just that I felt a bit disconnected at first. But yes, by the second half I was definitely all in. That said, I wasn’t just talking about the romance – the action of the shifter deaths, the mystery surrounding Priya and developments with Iskander definitely caught my attention too. For me this series has become much wider than just the romance between Wes and Hudson. As invested in them as I have been (and still am), I was almost equally invested in some of the wider cast.

Sirius: Oh for sure , for me this series became more than a romance between Wes and Hudson .  For me it is also the mysteries they investigate and the suspense around those mysteries .  We discussed it previously, but it is worth mentioning that I love the family they built around themselves and keep building.  I think that for me though Wes and Hudson are still very much the main characters and in these books. I define high stakes as something that may cause conflicts for them.  It doesn’t mean that I don’t care about everyone else.  I very much do.  I know you didn’t say that I am just trying to clarify my stance.

I also felt like their investigation in the beginning was just part of their work , just another day in the office so to speak. I was not bored at all, I just didn’t think that it would affect them or people around them in the personal way.  Boy was I wrong.

Speaking about personal growth I was very impressed how Wes dealt with his God’s powers, how he struggled to figure out what he could and could not do and what he should and shouldn’t do, and I still don’t think that the learning process is over.

Kaetrin: Yes, I agree he did well there. I was much more interested in his growth/powers in this book than the previous one. I guess I’d had time to settle into the idea. And I liked very much where he ended up with it.  As to the learning process, I don’t that’s over but I’m not sure I need to read about it in any detail/from his POV in the future.

I had some questions about Priya at the end still. What did you think of the story there?

Sirius: I don’t know about Priya .  I mean I get the shades of grey in people she was going for, but did we ever get the real version of her story ? Did I miss it ? What she really did in the past and why  ? Was the second version ever disproved ? Because if it wasn’t , I don’t feel like liking her much to be honest .

Kaetrin:  Yes, I felt the same. There were questions I had about her that didn’t get answered. And I felt terrible for her dad.

I’m not sure what else I can say about the book. What I most want to discuss is so spoilerish that I just can’t. But I will say there’s a thing that happens very late in the book which really upset me and I’m not okay. Partly because of the thing itself and partly because it happened so late in the book, I couldn’t enjoy the HEA as much as I wanted to. I felt a little betrayed to be honest and [redacted] detracted from my enjoyment of not only this book but it has also affected how I view all three books as a whole. I’m sorry I’m being vague but it is way too spoilery to give away exactly what. I’ll just say I did not like it. At all.  You and I have had a discussion about this privately though and you have a different view altogether, don’t you?

Sirius: Yes we did and yes I do!  I mean I did not *like*  the thing that happens but we cannot discuss because it is so extremely spoilerish but I also thought that it was good for the further plot and character development and I cannot even say for whose character development because it is so spoilerish.  I thought it was a right way (the right way in my subjective opinion  of course) to raise the emotional stakes further and I am curious as to what repercussions it will have for the future book/s. I will tell you one thing though.  It better have repercussions, because if not I will join you in feeling betrayed.

Kaetrin: While Graveyard Shift has a HEA for Wes and Hudson, there were some things that were unresolved by the end of the book. I had understood it was a trilogy but do you think there will be further books? And if so, do you think they will be from another character’s POV? Perhaps Lexi’s or Evan’s?

Sirius: For the super spoiler reasons we discussed I expect that next book will still be from Wes’ point of view but I could be wrong.

Kaetrin: I think Wes and Hudson’s story is basically done. There are some things which could be fleshed out from another character’s POV but I’d like to think that they’re not going to have any more relationship trouble. I really want a story from Evan’s POV.

Sirius: I really want a story from Evan’s POV too and if you are right and Wes and Hudson are complete, maybe the thing that we cannot discuss will be important for his character development more than anything else .

Kaetrin: There was a lot about the book I really liked but the [redacted] really shook me. I’m having trouble coming up with a grade. But for the [redacted] I think I’d have been looking at a B+.  Now?  I’m not sure. Sirius?

Kaetrin: I’m really conflicted. But the thing really upset me. I think I’m going with a B-.