REVIEW x 2: Get a Life, Chloe Brown by Talia Hibbert

I’ve heard a lot of buzz about your books. You have many fans and since your new book, Get a Life, Chloe Brown is the first in a brand-new series, it seemed like the best place to see if I could jump on the fan bus. 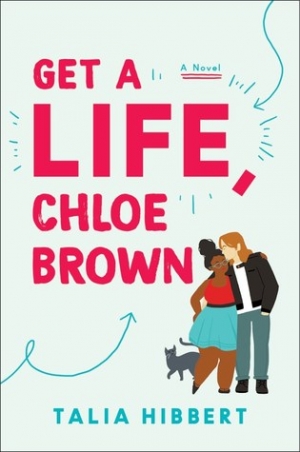 Chloe Brown is a survivor of a recent near-accident. After almost being run over, Chloe realizes that she hasn’t lived much in recent years. She makes a list of activities she’d like to do to “get a life,” everything from do something bad to go camping to have meaningless but satisfying sex.

Some of the reasons Chloe hasn’t tried some of these things before have to do with her disabilities. Chloe has fibromyalgia, chronic pain, chronic fatigue and anxiety. Not only is she anxious about doing some of the things on her list, she’s also frequently in pain. And that isn’t the only difficulty she faces. Her friends and her erstwhile fiancé abandoned her after the initial onset of her disabilities (in the finance’s case, on the cruel excuse that she could do better and wasn’t trying).

Redford Morgan is the superintendent of the apartment building Chloe has recently moved into. Red is an artist, but he hasn’t shown his paintings to anyone in some time. Once upon a time Red had budding success, but his rich then-girlfriend, Pippa, abused him physically and emotionally and robbed him of his self-confidence. He still presents as self-confident on the outside, but on the inside Red is in a lot of pain.

Initially Red pegs Chloe as similar to Pippa. They’re both from a posh background and Chloe is snippy with him, so he thinks they are cut from the same cloth. Chloe, meanwhile, is a bit resentful of Red’s great good health, his ease with his own body, and aware that she alienated him with her grumpiness early on in their acquaintance.

But Chloe and Red’s attitudes toward one another start to shift when Chloe finds a cat she thinks is stuck in a tree. Despite the risk of considerable physical pain, she climbs up into the tree to rescue the cat and then she gets stuck in the tree herself. Now she is the one in need of rescuing—by Red.

Red and Chloe then begin to get to know each other, to each see past the other’s mask, and Chloe eventually decides that Red is the person to help her fulfill some of the wishes she’s put on her list.

The book has much to recommend it but I ended up putting it down almost halfway through. The reasons for that are idiosyncratic and I don’t think they would apply to most readers, so I’m not sure how helpful my review will be. I encourage readers to seek out other reviews and / or try the book for themselves before making a decision about it.

As mentioned before, Get a Life, Chloe Brown deals with a number of issues – fibromyalgia, chronic fatigue, chronic pain, anxiety, and the aftermath of emotional abuse. A couple-few of these hit close to home for me and I can say without a doubt that the representation was excellent.

I appreciated the great representation and I’m sure that many people who experience some or all of these issues will be thrilled with it. But the book cut close enough to the bone that I wanted to read about something else.

I liked that the novel showed that men can be abused, just as women can be. It’s a sad fact of life that we hardly ever see discussed in the media or portrayed in romance novels.

There was a nice gender role reversal here, too. Chloe displayed a lot of emotional strength and toughness whereas Red was softer and perhaps even more emotionally fragile because of his past. The contrasting of their two disparate reactions to their difficult pasts was interesting, and Chloe’s grumpiness was a fresh gender-flip on the grumpy hero trope.

The book had a sweetness to it, but also a cuteness that was too much for me. An example of that is the scene where Chloe happens upon the cat in the tree. She has the following conversation with the cat:

After a moment, she called, “You sound as though you’re stuck.”

The cat screeched its affirmative like a miniature murder victim. It was small, but wonderfully fat, with fur so gray as to seem almost black, and piercing eyes that seemed to say, Surely you won’t leave me here?

Chloe sighed. “Are you sure you can’t get down? I don’t mean to be rude, but you know how this goes. Some gullible, bleeding-heart type clambers into a tree after a cat, only for said cat to leap mischievously down at the last second—”

Another shriek, this one blatantly indignant.

“Fair point,” Chloe conceded. “Just because you appear well, doesn’t mean you don’t require help. I, above all, should know that. I will call the fire brigade for you.”

The cat miaowed some more and glared down at her, a skeptical smudge against the sky. She was now quite certain that it was saying something like, The fire brigade, you wasteful cow? Don’t you realize we are in an era of austerity? Would you take much-needed public services away from children trapped in bathrooms and old ladies who’ve left the iron on? For shame.

This cat, like most of its species, seemed rather judgmental. Chloe didn’t mind; she appreciated bluntness in a beastly companion. And . . . well, it had a point. Why should she bother the fire-type people when she had a semifunctional body of her own? Fetching this cat might not be the cleverest way to end her walk, but then, staid, sensible Chloe Brown was dead. New Chloe was a reckless, exciting sort of woman who, in moments of crisis, didn’t wait for the assistance of trained professionals.

The thought plucked at her like a harpist plucked at strings. She vibrated with ill-advised intent. She would dominate this tree.

I’m have no doubt many readers will love this scene and find Chloe, Red and the cat adorable because of it. In fact, I think this cute aspect of the writing voice might be many readers’ favorite thing about the book. But though I enjoy this kind of thing in small doses, here there was more than I wanted.

I wanted more conflict than we got in the book as well. After Red and Chloe’s initial animosity was defused (this happens fairly early in the book) there was very little conflict. I usually prefer a strong conflict in books, but there are exceptions (Jasmine Guillory’s first two books come to mind), so I think part of the issue here was voice.

Voices are as individual as fingerprints, and whether a reader connects with one is like the chemistry between two people, either there or not. It’s a classic case of “It’s not you, it’s me.”

I’m pretty sure I’m the outlier in this case. I expect far more readers will have a reaction similar to Kaetrin’s. Readers should absolutely read Kaetrin’s A- review and others rather than relying solely on my own when it comes to deciding whether to try the book.