REVIEW: While It Was Snowing by Elyssa Patrick 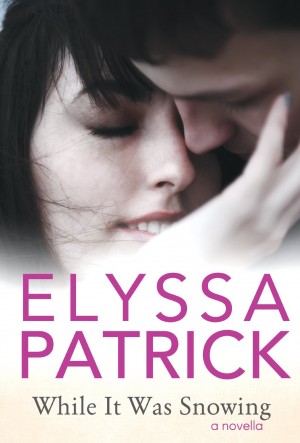 Felicity Evans and Harry Walsh have been best friends forever, but lately, Felicity has noticed the looks Harry has been giving her. And she’s going to do something about it. Sex solves everything, or so she hopes. But she never knew Harry was a virgin—until now. Being snowbound in a Vermont cabin is the perfect opportunity to take things to the next level . . . and perhaps dare to lay her heart out on the line.

I will admit I was seduced into reading this novella by the description of a shy, bow-tied hero who gets pursued by a heroine with a purpose – to get him naked and in bed. That whip cream was involved added to the appeal. The story started well, kept me interested and involved yet after I was done, I realized I felt it was missing something.

I loved the opening. Felicity is a doll and ready to go for what she wants, let it all hang out and get whip creamed up. I admire her determination and courage. I loved Harry in a bow tie and how flustered he got when he saw what Felicity was willing to do to get him.

The role switching was a nice change. Felicity feels need to romance Harry and gently lead him on – once she realized that the in your face, brazen approach wouldn’t work with him. Harry is the shy one who is unsure of himself and his attractiveness to her.

Harry’s contract is a hoot. All 16 single spaced legal pad sized pages of it. And Harry reads romance and better yet he realizes that most “legal” stuff in romances is nonsense. I gotta love a hero who says that he doesn’t just love his heroine he “breathes for” her. He’s like Rudolph (the Red Nosed Reindeer) when Clarice says she thinks he’s cute.

But then things slow down. Initially that’s okay for me as these two acknowledge that they’re moving too fast. Now things are getting real. Messy. They are two different personality types clashing in this new type of relationship because wow, Harry’s got some real self esteem issues. He’s the type to edge up to the end of the diving board and look over, turn pale and scramble backwards to safety. Felicity is the type to charge forward and scream “Cowabunga!” Harry’s thinking too much and screwing things up – as men do.

He is a – well he’s supposed to be a beta but in reality he’s beyond a beta. He’s a wimp. At first this was charming. He’s shy, he’s uncertain, he can’t believe that this woman he’s worshiped from afar could ever possibly have any feelings for him but friendship. Aw, how sweet. Until, that is, he can’t move past this. For almost the whole story. Really, it got old. I wanted to yell at him to just try to grow a pair. He didn’t even actually have to grow them, just try.

The time spent after Harry’s f-up – 33 1/2 hours – allows for contemplation. For thoughtful thinking about relationships, each other, life without each other, friendship, risks and risks of doing nothing, truths and being willing to open up your dreams to another person, to take the chance with something that is dear and precious to you. It also slowed the novella down too much for me. I wanted romance and wasn’t getting much of it.

Then the “spider in the shower” scene livened up the party again. Even having had this happen to me, I laughed then snorted hysterically when Harry “Nicholas Sparked” it to death.

Finally they’re ready to take a chance to see what happens. Each is making the other grow, be better, dream bigger, hope for more. They know they might fail but the risk is worth it. Then, just when they are at last on the same page then WHOOOSH – the story zips to the epilogue which is basically 30+ years later and I’m thinking “Wait a minute. Where did the consummation scene go? I wants it.” Now usually I can take or leave the sexy times scenes but here, I got my expectations built up to get —- nothing. There was so much I liked but after thinking about it for 2 days, I couldn’t help but feel short changed. B-

→ Jayne
Previous article: Monday News: victim-blaming, ghostwriting, and messaging in books
Next Post: REVIEW: The Girls at the Kingfisher Club by Genevieve Valentine