REVIEW: The Girls at the Kingfisher Club by Genevieve Valentine

I first came across your YA historical novel, The Girls at the Kingfisher Club, when The Book Smugglers reviewed it. Hapax also raved about it in our Open Thread for Readers for September. 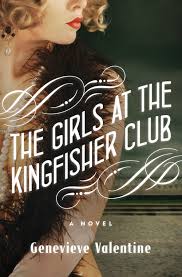 Everything I heard about this novel, especially that it was a Jazz Age set retelling of the Brothers Grimm fairy tale The Twelve Dancing Princesses, convinced me I would like it, but I held off on purchasing the book for a long while because of the price. Finally, with the end of 2014 approaching and my best books of the year list deadline looming, I bit the ten dollar bullet.

The novel begins by telling us that “By 1927 there were twelve girls who danced all night and never gave names, but by then the men had given up asking and called them all Princess.”

The novel, written in a gorgeous present tense omniscient voice, shifts quickly into the men’s viewpoint for the first chapter:

Wild things, these girls; wild for dancing. They could go all night without sitting, grabbing at champagne between songs, running to the throng at the table and saying something that made them all laugh, light and low together like the parts of a chorus.

It wasn’t right, all those women sticking together so close. Something about the wall of bob-haired girls scared the men, though they hardly knew it. They just knew they’d better dance their best with a Princess, and no mistake.

But the book doesn’t stay in this POV for long, and in chapter two we are introduced to Jo, the eldest of the girls, who has just been summoned to her father’s office, and we learn that the girls are sisters.

From there on we are only in the twelve girls’ viewpoints, and unlike the original fairy tale on which the novel is based, this version of the story places our sympathies with these girls who might, to an outside observer unfamiliar with their story, like those men in the first chapter, seem cold or frightening or even heartless.

Jo, the coldest of them all, is her younger sisters’ protector, and the person she is protecting them from is their father.

The girls’ father (whom we know only as Mr. Hamilton or as Jo calls him, “Sir,”) married their mother so that his son would be able to fulfill his ambitions by marrying into a higher social register. But the girls’ mother never gave birth to a son—instead came one daughter after another, until the day Mr. Hamilton’s wife died giving birth to the youngest.

The girls, Jo, Lou, Ella, Doris, Hattie, Mattie, Rebecca, Araminta, Sophie, Lily, Rose, and Violet, barely knew their mother and none really know their father, who sends for Jo when he has something to communicate to them. Worst of all, they don’t know the outside world, except for the nightclubs they sneak out to dance in. Their father is so ashamed of having fathered twelve daughters in his futile quest for a son that he will not allow them to leave the house.

Jo, who was once taken to the opera house by a nanny for her tenth birthday, taught Lou, Ella and Doris how to dance the waltz and the reel. A nanny gave them the steps to the polka. Jo asked her father for dance lessons; he refused. At ages fourteen and thirteen, Jo and Lou snuck out to the movies and came back with the foxtrot, and later with ragtime, the grizzly bear and the new waltz.

Dancing is the sisters’ act of defiance, and of unity in the face of their father’s oppression. But in order to protect her sisters from their father, Jo has to enforce his rules as much as she can. By the time Violet, the youngest, is old enough to sneak out of the house with the rest, Jo is in her mid to late twenties. She could escape, live her own life, but if she did, what would happen to her youngest sisters?

Now their father has summoned Jo to his office — to tell her that he has decided it is time for his daughters to marry. He has no intention of introducing the girls to society, or even of letting them get to know the men he will select for them to marry. He wants the weddings to happen quietly and quickly, without his peers ever learning that he has twelve daughters.

The girls, in a panic, turn to Jo, and she in turn promises she’ll think of something, but she is fresh out of ideas.

Long ago, Jo had feelings for a bootlegger she met at the Kingfisher Club, such strong feelings that she almost abandoned her sisters to go with him. But he disappeared, and Jo hasn’t let herself dance since the night she almost left town with Tom, for fear she’ll be tempted with disloyalty again.

Jo’s sisters can’t appreciate the sacrifice she made for them. To them, she is the enforcer of their father’s rules, and her own. She’s the one who makes sure they sneak out of the house without being heard or seen, and that they all make it back to their beds before dawn. They don’t entirely realize Jo is the buffer between them and a heartless man, that Jo has to appear almost as heartless to protect them from him.

Only Lou, the closest in age to Jo and her roommate, senses some of the cost her sister has paid. Only Lou remembers that it was Jo who suggested that they sneak out to go dancing, to give Lou breathing space in the midst of rage. Lou and Jo resent and love one another as only sisters can.

When their father hears rumors of twelve wild girls who dance all night, things go from bad to worse. When Tom, the bootlegger Jo once liked turns up, and her sisters champ at the bit to escape their father, what will Jo do?

The Girls at the Kingfisher Club is beautifully written, with vivid characterization and setting detail, down to the chapter titles taken from 1920s songs. The language is gorgeous, uncluttered yet poetic. I bookmarked several passages including this one:

Lou will dance anything, with anyone; she needs only a partner to be happy. She’d wear out a pair of shoes a night, if Jo would let them stay long enough.

Lou drinks like a fish and never gets drunk, as if her body burns just to keep her going.

Lou kisses her first boy when she’s eighteen. He says he’s an actor, which Lou can tell is a lie (so much for acting), but she likes the look of him, and he isn’t the only one who forgets the truth in a dance hall.

I consider this novel a feminist take on The Twelve Dancing Princesses because as in the Brothers Grimm version, the girls’ cynicism and heartlessness where their would-be suitors are concerned comes through, but here, unlike in the Grimm story, their father’s behavior and the situation of the POV with the sisters makes it so easy to empathize with that hardheartedness.

If The Twelve Dancing Princesses sides with the old soldier who discovers the sister princesses’ secret, The Girls at the Kingfisher Club sides with the girls. The book had this reader hoping against hope that their secret would not be uncovered.

I loved the way the book portrayed the bond of sisterhood, its fierce love and its fierce tensions, although there were times when I felt it was odd that Jo would be so removed from her ten youngest sisters. The book has no fantasy elements, but it does feel as if the characters inhabit a kind of heightened reality. If I were to take the story entirely literally, I might also wonder how a man could hide twelve daughters from his peers. Didn’t his servants gossip? But these things were part of the story’s premise, so I accepted them from the beginning. Everything else that happened followed from there.

I admit I initially felt disappointed that Jo’s actions couldn’t protect her sisters more, that she wasn’t ultimately a hero who saved all of them. But on reflection, I decided I like that the story is more complex than that, and that the rest of the Hamilton sisters have their own agency within it, which they might not have had they simply been there for Jo to rescue.

While I wanted some of the sisters’ characters to be fleshed out more, twelve women plus a handful of men are a lot of characters for a book that comes in at under three hundred pages.

There were points when I also wished the book would take on more of the issues of the time more directly—the economic disparity between rich and poor in the 1920s, the laws against people of different races marrying and the strictures against their dating or even dancing together. The book touches on these topics lightly because of the focus on the sisters, but these issues are present just enough that I didn’t feel the novel was dismissing them.

The romantic relationships, although secondary to the sisters’ relationships with each other, held my attention as much as the rest of the story if not more. The novel also contains one sex scene. It’s not explicit but it’s there. No doubt some readers will want to know if the story ends happily or not.

As far as the sisters, yes, absolutely. The romantic relationships are left somewhat up in the air and open to interpretation, which I don’t usually mind at all in a YA. Here I minded a little, but at the same time it felt like the right ending for this book.

The Girls at the Kingfisher Club is suitable for older teens and will appeal to adults as well. If you like fairy tale retellings, don’t miss it. B/B+

→ Janine
Previous article: REVIEW: While It Was Snowing by Elyssa Patrick
Next Post: What subgenre needs more books?