Full Moon is book 2 in your Second Chances series, about a group of friends who all set “second chance” goals for themselves one New Year’s Eve. I quite enjoyed Fix You and I liked the premise of this book quite a bit. Josie Jacobson is a single mother who 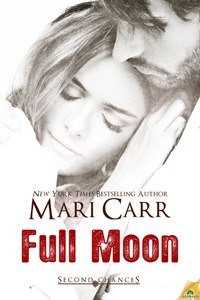 se only relationship led to a shotgun wedding and, 2 years prior to the beginning of this book, a divorce. She hasn’t dated much and she decides now is the time to do some sexual experimentation:

“I want to broaden my sexual horizons while I’m still young enough to try all the kinky positions.”

On the first full moon, she takes herself to a bar, the Blue Moon, thinking that the name of it might be serendipitous. There, she meets sexy bar owner, Jake Stewart and she ticks off her first full moon item – sex with a stranger.

On the second full moon she finds herself again at the Blue Moon, having spent much of the previous four weeks thinking about Jake and wondering if she had imagined the spark between them. Jake agrees to be her partner for her second item – sex in public – but only on the condition he gets her third full moon as well.

Josie thinks she doesn’t have time for a relationship and isn’t looking for one. She’s very gun-shy after her marriage to Tony, who is a good dad but was a lousy husband. But Jake is pretty much perfect and over time, she runs out of reasons not to include him in her life.

Some of the things on the list would definitely not be advisable to try with a complete stranger so I was glad Jake got the gig – in fact he points this out to her and she makes the appropriate concession that she hadn’t actually given the practicalities much thought; she had just written a list of all the things she wanted to try. I did have to suspend my disbelief a little about that, but I was prepared to go with it for the sake of the story.

In terms of conflict, the main one was Josie’s reluctance to embark on a relationship and it was fairly low key as conflicts go. Tony, the ex-husband, has his part in the story but when I thought the narrative might take a more predictable turn in terms of how Jake might deal with Tony’s presence in Josie’s life, it did not. Which was refreshing in many ways, even if there was one situation where he was (to me) a bit annoying about it.

It has to be said however, that Jake really is practically perfect. He’s not quite Mary Poppins in male form because he does have a bit of a kinky side (I guess I’m making assumptions about Ms. Poppins here though). But he’s handsome, smart, funny, employed, sexy, charming, reasonable, doesn’t jump to conclusions, loves kids – particularly Josie’s son Tommy, he gets on well with all Josie’s friends and he’s not pushy or demanding, except in consensual sex play. There really isn’t any reason Josie would not want to be in a relationship with him.

The book is short – just over 100 pages, so the lack of conflict didn’t bother me too much. In a longer book it would have been much more problematic. I did think some of the sex scenes, while hot, were kind of cut short at the end and felt a little… perfunctory – not on the part of the characters, but in the writing style. If that makes sense.

It’s a fairly innocuous but sexy and fun contemporary, low on angst and enjoyable. I give it a B-.