“It should have been their trip of a lifetime. But with just days to go, Jonathan Cork finds himself dumped by his girlfriend, Kate Thornly. Even worse, a life-threatening allergy means he can’t travel alone. Unable to change the name on the spare ticket and fast running out of time, Jonathan resorts to desperate measures. He advertises on eBay for a travel companion with the same name as his ex. The problem is, it’s a complete lottery who he’ll end up with.

What follows is a funny, page-turning, roller-coaster ride around South America.”

What an interesting premise for a book. The uniqueness of the plot and writing style shown in the opening excerpt are what hooked me and got me on board to read it. I will admit to some disbelief that there are that many Kate Thornlys in GB but for the sake of moving the plot along, okay. I really fell in love with KT2/Angel and not for any “she’s such an inspiration!” guff either. Angel is funny, opinionated, independent, calls ’em as she sees ’em, doesn’t let Jonny/JC get away with shit and is uninhibited in a way I can only marvel at. 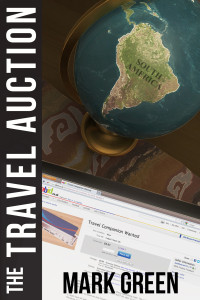 But what happens to the ebay auction? It begins with that, which kicks off the funny first chapter, and then the selection process seems to shift to interviews. Later Jonny/JC and KT2/Angel’s notoriety depends on the fact that this was supposedly all over ebay but it’s not like Angel’s friend Maria bid in Angel’s place and “won.” And can Angel taste nuts? She can’t detect them and if the food is fried in nut oil, how would she know so – why the sham/charade of her testing Jonny/JC’s food? I would also think that he’d have cards printed out ahead of time in Spanish and Portuguese warning of his allergies that he could show to wait staff along the way. I also wondered just how many epi/adrenaline pens did he bring?

The trip around South America sounded like a blast. The detailed comments JC relays to Angel give it a super “you are there” feel for those of us not as lucky to have bummed around Argentina, Peru, Bolivia and Brazil. I did notice a tendency on JC’s part to paint the experience with a light wash of “Oh, the noble, natives, how happy they are with what little they have” sepia tones. He also begins to soulfully admire how brave and fearless Angel is and wax rhapsodic about how she’s “opening his eyes” and “making him see life anew” or some such. Gosh, almost like she’s some kind of inspiration for him. Thankfully, Angel doesn’t sink into Saint acting role.

I don’t want to give away the secret but it would be hard not to talk about something that is a major part of the story and Angel. She never views herself as lesser, only as needing different cues in life and isn’t afraid to confront anyone about their thoughts on her disability. I’m not sure how someone who is disabled will like this story. I’m hesitant to comment on the validity of Angel’s character or her actions. But I did like that the focus of the story is on JC and Angel and their growing relationship via traveling and not her condition.

I like the dual PsOV layout of the book and also that you manage to avoid retelling the same thing when the POV shifts to the other person. The pace is brisk and the book didn’t have the dreaded saggy middle. The romance and relationship keep chugging along and I like that the relationship arrives and is allowed time to breathe long before the naughty bits get into action. JC and Angel ingeniously arrange for the healthcare needed after their harrowing drive from the jungle back to La Paz – that was a sobering view of traveling insurance – and still manage to get the better of those who would hound them for a story and invade their lives. It all also kickstarts JC’s realization that Angel is the one for him and that he’s not going to lose her because he didn’t try. His methods confirm that he’s changed dramatically from the orderly, list making man who began the journey. Any bloke willing to wear what he does and do what he does to win her and chuck the nosy reporters richly deserves his HEA.

The story is open ended and yet not. Angel and JC are easing into a relationship – despite the “From Here to Eternity” public show – but there are still issues for them to confront – namely the “late breaking” medical information which I don’t recall JC having even told Angel yet. But it’s a bright and shiny future they’re headed towards as they wing their way to Heathrow. I feel good about them but slightly, giddily apprehensive about what Angel’s equally uninhibited friend Maria will get up to when she hears all the scoop. I predict some wild theme parties and hen nights. B-