REVIEW: The Devil in Denim by Melanie Scott 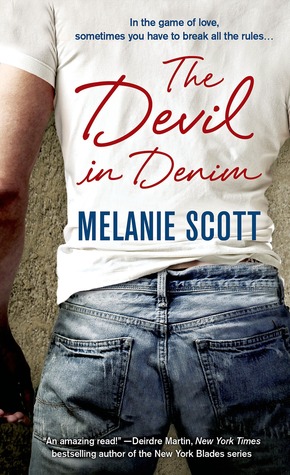 Maggie Jameson loves baseball and in particular, she loves the New York Saints.  Her dad, Tom, owns the team and Maggie grew up in and around the game, the players and Deacon Field, the Saints’ home ground.  The press long ago dubbed her “Saint Maggie” and she has always been a PR boon for a team which generally struggles on field.  Saints fans are the most devoted because they had to be – their record was pretty dismal.  Maggie has dreamed of taking over from her dad as CEO one day and has recently completed her academic education, gaining  a degree “crammed full of economics and psychology” as well as a master’s in sports management.  She anticipates working with her dad for a while and then taking over.

Unfortunately, on her return from her end of school European holiday, she is blindsided by the news that Tom plans to sell the Saints to a consortium consisting of three best friends and Saints fans, Alex Winters, Malachi Coulter and Lucas Angelo. Alex, not Maggie, will be the next Saints CEO.

The story has a somewhat unusual start. The three friends are playing baseball during college when there is a bombing at the stadium. Alex and Lucas are seriously injured when all three assist in the rescue of those trapped in the rubble.  The inference is that Alex’s injury meant he couldn’t play anymore.  No much more is made of this major, life-changing event in the book and much to my surprise, it doesn’t form part of the legend of Alex Winters’ success.  Even more surprising since Maggie did a case study about Alex at college, she doesn’t know anything about it until quite late in the book.   Perhaps the bombing will form a bigger part of the storyline in Lucas’s or Mal’s book but it felt a little disjointed to me here.

Not surprisingly, Maggie regards Alex as the enemy from the beginning and the book gets it’s title from her moniker for him “the devil” and the fact that he prefers jeans.  A search indicates that the word “devil” is used in the book some 46 times.  For me, that was about 30 times too many.  I got the motif of saint (aka angel)/devil but I felt a little bashed over the head with it.

The sale isn’t a done deal until the other team owners vote to approve it apparently (I have no idea how baseball works but I assume you did your homework here), so it is important PR for “Saint Maggie” to openly support the deal.  Alex asks Maggie to come and work for him at the Saints, at least for a few months until after the sale has gone through and after the next season starts.  If she doesn’t like it, he will give her a glowing reference and wish her all the best for her future, no harm, no foul.  For Maggie it is the least-worst option so she accepts. Even though I’ve tagged it “enemies to lovers” I’m not entirely sure that is a correct description – Alex never regards Maggie as an enemy – the animus is all one-sided.

Regardless, Alex and Maggie are immediately attracted to each other but, apart from the tension between them because Alex has the job Maggie always wanted and thought she had been promised, having sex with your boss is very often a Very. Bad. Idea.  They resist for a while but eventually, their chemistry is too much.  It has been aided by the fact that Alex, Lucas and Mal include her in their decision making process and incorporate her ideas and strategies into their plans.  She feels like she’s a part of the management team and not just a figurehead or prop.  She comes to admire Alex’s business acumen even more than she did when she’d used him as a case study and she gradually comes to accept that the sale of the Saints is something which will happen irrespective of what she wants.  The Saints need a cash injection and Tom can’t do that without risking his other businesses and personal finances.

I found the first part of the book a little uneven but the second half was much stronger.  This coincided roughly with Alex and Maggie commencing a physical relationship (am I really that shallow?  Maybe.) but it was also where the dialogue between the two started to crackle off the page and I had a real sense of connection between them.

I liked that when they started to entertain the idea of a fling/relationship, they talk about the pros and cons (well, mostly the cons).

“It’s just…” Her gut churned. She didn’t even know how to explain what she was thinking.

“It’s just that I’ve got all the downside here. If this goes wrong.”

“I’m not going to fire you if we stop sleeping together.”

Alex acknowledges that the career downsides are all hers, but he gained points with me after he said this:

“Maggie, you’re not the only one with downside here. If I screw this up then I’ll lose you.”

If they resist their attraction there’s no romance and that’s what the book is all about. Of course they’re going to give in.  But I appreciated that they thought about it and made plans to be able to work together if things between them personally went sour. That seemed smart to me.

I also liked that Alex was very clear about consent and what actually constituted a yes.

“If you come upstairs, you know I reserve the right to send you home with nothing more than a drink, right?”

“Maggie, any guy who doesn’t know that is a grade one asshole. I know you don’t always like me that much but I’d like to think I’m not a douche. If Scotch is all I get then so be it.”

Later in the book, their personal relationship is threatened by professional conflicts and it was here that I thought Tom’s earlier assessment (about Maggie not being ready for the CEO position) was proven.  I thought her reaction lacked maturity and was laden with unrealistic expectations.  Fortunately, this was not a long section of the book.  I thought Alex’s conduct was professional, appropriate and pretty generous in the circumstances.

Maggie did get a chance to make up for things though and I appreciated very much the girl power of the rescue.

The book had rather an abrupt end.  I was eyeing the page count wondering how things could be resolved with so few pages left.  It does have a happy ending, but I’d describe it more as happy for now rather than HEA.  Which, in the context of the book was entirely appropriate.

The baseball in The Devil in Denim is more about administration/corporate side of things rather than the actual game.  The story takes place in the off season but I felt like it had a good flavour of the sport. I really, really liked that the other female characters in the novel were not just there to be future heroines for Mal or Lucas.  Maggie’s best friends are in solid relationships with Saints players.  I have no idea who the next heroine will be.  I cannot tell you how happy this makes me.

I ended up enjoying the book more than I initially thought I would after a somewhat choppy start and I plan to continue the series – the next one, I believe, is Lucas’s story.  Grade: B-