REVIEW: The Race for Second by Chase Potter 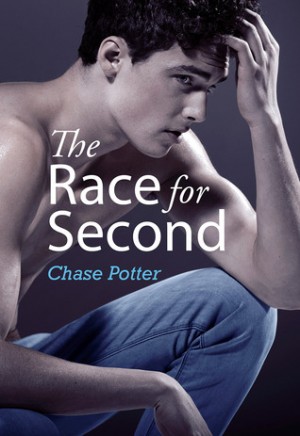 For college sophomore Ethan West, the upcoming fall semester will be the start of a year abroad in Germany that he’s always dreamed of. Having broken up with his boyfriend the day before his flight, he’s ready to face Europe with no attachments… and no desire for any.
But as Ethan gets to know Daniel—one of his three German roommates—his resolve starts to soften. Though Daniel is initially standoffish, unpleasant, and sometimes downright hostile, the two are undeniably drawn to one another. Even Ethan’s conviction that Daniel is actually straight begins to erode as they grow closer, gradually revealing a buried part of Daniel’s past that will threaten to tear them apart. Not to be outdone, the town of Freiburg guards its own secret, a thread of forgotten history unraveling into something far greater than Ethan is prepared for.
The Race for Second is a coming of age story that delves into the depths of the young heart and its search for intimacy and acceptance. Charmingly woven into the German university town of Freiburg, Ethan’s story is one of finding the courage to pursue what we truly desire, even at the risk of losing everything.

Somebody recommended your story on the book discussion forum I frequent. I was intrigued by the premise and purchased the book, but because I was also warned that the story is not a Romance, I had to be in the mood to start reading it. I finally did and really liked it overall. But please heed the warning if you are a pure romance reader – no HEA or even HFN ending.

The blurb does a really good job describing the plot of the story – Ethan goes to spend a year studying in Germany and he meets Daniel there. It actually starts the way many m/m romances do – young gay man (Ethan is 19 when the story starts) falls for a straight man, but the initial set up is all this story has in common with those storylines. There is certainly no “gay for you” transformation for Daniel and I would say that even though a lot of pages are devoted to Ethan and Daniel’s relationship, the story is first and foremost a “coming of age” for Ethan, his maturing as a person, gaining more understanding about himself and the world around him.

Ethan is gay and fully accepting of that part of him, which was something I really appreciated as well. Before coming to Germany he broke up with his first boyfriend because he did not feel that he wanted something more with the guy than the casual fun they had, even if his boyfriend may have wanted more. I really appreciated the effort which was made to portray him as a well-rounded “person” rather than to just discuss his love life. Ethan is really enthusiastic about coming to Germany – he took German in school, but he always wanted to improve it and even though his family is not rich, he and his mother saved the money for a year to make it happen. I could see that he came to Germany because he was very interested in improving his fluency in the language and learning more about the history. I could really relate to his loneliness in another country and how he wanted to make friends faster than he did, but nobody around him seemed to be very interested in making new friends in the beginning.

I liked Ethan’s voice – I have grown to love the first person’s narrative more than I did before I started reading m/m romance, but this book is mostly written in the present tense with sometimes the narrator sometimes switching to past tense, and that is still not the type of narrative I usually prefer. It worked for me in this book though. I also really liked that he was dealing with family issues, but would not let them overtake his whole existence. I liked the portrayal of Ethan’s mother, even if it was mostly in Ethan’s thoughts – I thought it was more complex and subtle than the usual “homophobic parent” of m/m romance. Actually I still cannot decide whether she was showing some internalized homophobia or Ethan was over thinking a loving parent’s reaction to coming home and seeing your child kissing another boy. It probably was both, but I liked that the book made me think and decide on my own what I thought about the character, rather than shoving an over the top portrayal in my face.

And I am finally getting to the main storyline – Ethan’s friendship with Daniel. At first Daniel holds Ethan at arm’s length and resists any attempts by Ethan to be more than civil, but then suddenly everything changes and they become good friends. Ethan falls hard for Daniel and at first it is really painful for him, but Daniel seems to be Ok with them becoming close friends.

“I’m glad he’s gone back to correcting, because my face feels hot. I’ve never met anyone like him before. It still feels like he’s holding me at arm’s length, but his ice is melting. Whenever we interact, there’s still something else beneath the surface that I can’t quite identify. It’s there and it’s close, but invisible like air smelling with humidity before a thunderstorm. And just like a storm, there’s a sense of impending change. Not quite yet, but eventually though, conditions will change and the rain will surge forth in a torrential onslaught.
“There,” he finally says, “It’s perfect.”
“Really?”
“Well, it’s as good as it’s going to get.”
Only now seeming to realize how close we’re sitting, he scoots over a couple inches before handing me the computer and moving to his desk chair. He looks like he’s about to ask me to leave, so out of courtesy, I thank him for the help and stand up from the bed.”

Eventually Ethan accepts it – not in the sense that he stops loving Daniel, but that being friends with him is something he can do and it is better to have him as a friend than not to have him at all. As you can probably see, not much happens in the story, but what happens to their friendship and why is a really big spoiler and I cannot say more about it.

I can, however, say that I thought that Ethan grew up a lot during his time in Germany and I hoped for all the best for him and Daniel. There is nothing really tragic at the end of the book, and I do not think that it is a spoiler to say that since Daniel is straight they do not get romantically involved, but as I previously mentioned there is a big spoiler which causes problems.

I have to note that in the course of his studies and during his deepening friendship with Daniel Ethan learns about some events which took place in the town during Second World War. I thought that the attempt to draw the parallel between what took place back then and what took place in the present felt very awkward and the comparison was artificially constructed.

One more thing – there are certain German phrases used in the book, and while I cannot determine whether they are correct, the author mentions living/studying in Germany, so I am hoping that it was used correctly.

→ Sirius
Previous article: REVIEW: The Devil in Denim by Melanie Scott
Next Post: REVIEW: The Girl from the Well by Rin Chupeco