Please note: If you think this series might be of interest to you may want to avoid this review—it’s full of spoilers for books one through four. Start with my review of Pretty Pretty Boys, book one in the series, instead.

Your gay police procedural series, Hazard and Somerset, took hold over me this past summer. I picked up the first book more or less on a whim and while the mystery plot wasn’t all that, the romance was so good that I decided to catch up on the entire series. This may be a project since as I write this there are eleven novels, six in this first arc, five (so far) books in a sequel series, as well as two short story collections. But when a romantic storyline is this gripping, what’s a reader to do? 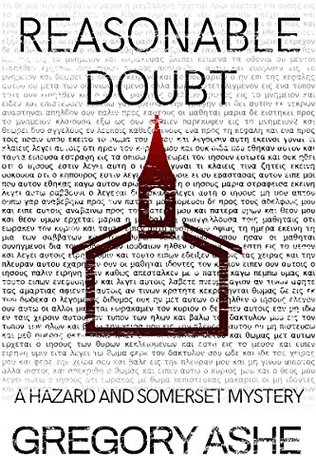 Somers and Hazard have a painful, even brutal history. Over fifteen years earlier, Emery Hazard was the only openly gay student in their Wahredua, Missouri high school. Hazard was bullied horribly, and John-Henry Somerset, aka Somers, was one of the bullies.

Pretty Pretty Boys, the first book in the series, saw Hazard returning to Wahredua and joining its police force. On day one of the job, Hazard was assigned Somers as his partner. Professionally they were well-matched but on a personal level all that history seethed between them. But Somers was much changed and genuinely sorry. Eventually they became friends but suppressed their attraction whenever possible.

In books one, two, three and part of four, Somers tries to get back with his estranged wife, Cora, and Hazard dates Nico, a younger man. The fourth book, Guilt by Association, was the book where all that changed. Hazard and Nico broke up, Somers and Cora gave up on their marriage. By the end, Somers and Hazard admitted their love and hooked up.

When Reasonable Doubt begins, Hazard and Somers are a little over two months into their romantic partnership and very much in love. Hazard is trying to adjust to the presence of Somers’s two-year-old, Evie, in his life. Somers gently questions Hazard about whether he wants a family and how he envisions their future. Hazard hasn’t given it much thought, possibly for the reasons that drive him later in the book, and his statements that they can do whatever would make Somers happy don’t satisfy Somers.

A bigger hurdle forces its way into their lives in the form of a new case. The murder victim, John Oscar Walden, is also known as Brother Jeshua, Christ figure and leader to a local cult, the disciples of the Lamb. The house where Walden was stabbed to death neighbors a locked barn. Somers and Hazard force their way in to the barn and find a middle-aged woman having sex with a teenage boy.

The woman is Sister Mary aka Kelley Jane Walden, the victim’s wife. The boy, Clyde Beauchamp, is called Lazarus by the cultists. Several other “disciples” show up and are escorted to the police station where they are interviewed separately.

Sister Naomi is an elderly woman and a true believer, Sisters Claudia and Anna are taciturn siblings, Sister Sapphira attractive and sharp. There are also three “Brothers,” Jesse, Dan and Paul. Two female cult members in their late teens, Sister Sarah and Sister Hagar, are missing.

Hazard and Somerset discover that Hagar and Sarah argued over something and after a visit to a Price Chopper, went separate ways. Neither has been seen since then, but when a visit by a satellite dish installer that same day is mentioned, Hazard and Somers pursue that as a lead.

They find the cable installer, Rex Kolosik, holed up with “Sister Hagar” at a motel. Hagar identifies herself as Peyton Laflamme, the daughter of a famous actress. Peyton doesn’t share the beliefs of the other cultists. She ran away from home in her early teens and ended up with the cult but then lost her faith. Now she wants Rex to come forward with her and claim the million-dollar reward that her famous late mother offered for information on her whereabouts. Sister Sarah, Britney Cowper, is missing. Hazard and Somers take Rex and Peyton to the station for questioning, but Peyton is sprung out by her other mother.

Most painful is their witness interview with Clyde. Though the boy won’t talk about it, it is evident that he has been abused—physically, emotionally, sexually—for years. Hazard and Somers are both hit hard by that aspect of the case, Hazard more so of the two. That’s because of a bad experience he had in his youth.

Hazard’s dad turns up for the first time in the series. There is bad blood between him and his son and Hazard is angered by his visit due to this same trauma. The part of Hazard’s backstory that is salient here is revealed at around 11%, but it is pivotal to the plot so I’m going to hide it just in case:

As a teen, Hazard was forced to undergo abusive “conversion therapy” at the hands of religious zealots.

As the case unfolds Hazard and Somers have to go to darker and darker places, both outside and within. Not just in terms of the motives and actions of the suspects but eventually even in terms of their own. The book opens with their connection in the best place it has ever been but the case tests their relationship as never before.

Will Hazard and Somers catch the killer before that person can kill others? Will they find a safe home for Clyde? And will their relationship survive despite the brutal truths the investigation lays bare?

This book was one of the stronger entries in the series but I still had some issues. The first was that as with most of the other books in the series, the mystery was convoluted, making it hard to keep track of all the relevant details. A second was difficulty in differentiating the cultists because of their identical honorifics; I had Sister Mary and Sister Naomi mixed up for quite a while.

There were a few other things that bothered me:

The cultists believed that “Jeshua” (Walden) would rise from the dead after three days and one character fuels these expectations for an ulterior motive. I never understood what that person planned to do after three days passed and it became clear Walden wasn’t going to undergo a resurrection, what explanation this cultist could offer to the others, and that made it hard to buy this person’s motive.

Also, I’m getting weary of seeing Hazard injured and tortured (both emotionally and physically), whether in the present-day storyline or in his past. Enough already. At this point it’s overkill and seems like some kind of weird fetish for inflicting pain on him. I have several books left to read and I hope the author steps away from that.

A more minor irritant was that Somers and Hazard twice made inferences about the murder victim’s personality based on nothing more than that person’s appearance. I thought that was a reach.

In terms of the Emery and John’s relationship, I loved seeing them as a couple. When I finished the previous book, I wondered how Somers would handle their relationship. When we first met him he was so closeted that he rationalized away his attraction to men. I was afraid he might remain partially closeted even after beginning a romantic relationship with Hazard so I was thrilled to see that this was not the case. Somers seems, if anything, more at peace with himself now and happy to hold hands with or kiss Hazard in public. This is the first book where we haven’t seen him get plastered.

The opening sentence is, hilariously, “A baby isn’t a loaded gun.” Hazard feels more scared of two-year-old Evie then of a firearm.

Later in the book, though, that sentence takes on a more serious meaning and tone.

With every newly-unveiled piece of information about Hazard and Somers’s teen years (as with Hazard’s history with his parents here) the characters and the relationship become more real, complex and interesting. Most of the books reframe at least one of the characters and both of them prove to be flawed.

Somers’s flaws were more apparent in the earlier books—I started the series all about Hazard and the relationship but not so into Somers himself. At this point, though, I love Somers. He has such patience with Hazard even when Hazard is at his most trying.

Hazard, on the other hand, is a more difficult character here.

He absolutely has great reasons for being as messed up as working this case makes him, but since it bleeds into the romantic relationship it wasn’t always easy to read about.

Neither man is 100% secure about where he stands with the other. Somers knows that his abuse of Hazard during their teen years will always be between them. Whether or not Hazard acknowledges that, it’s there. As gut-wrenching as it is to read, it’s also real. The bullying isn’t whitewashed, and I appreciate that.

Faith vs. doubt is the central theme in Reasonable Doubt. It’s the case in Hazard and Somers’s relationship; each believes he has screwed up or will eventually, and neither sees himself as a worthwhile romantic partner, so they both expect abandonment. But the faith vs. doubt theme also resonates in Hazard’s relationship with his father and in the religious sense for the cultists and for the protagonists.

The series is built around non-communication. For me it works because there’s such a hard past in this relationship and that makes Hazard and Somers uncertain and tentative with each other. Both keep their painful feelings bottled up for as long as they can. There’s enough motivation for their difficulty in communicating that it fits. Most of the time it’s organic, even powerful. Occasionally I get impatient but it rarely feels contrived.

The writing could be more polished—more dialogue tags would help identify the speaker sooner, and sometimes the POV isn’t established soon enough when it changes, and that creates confusion. But there is also some gorgeous and romantic writing in these books.

Hazard didn’t have fancy words or a clever response. He was a man of reason. Facts. The feel of Somers against him. The ripple of muscle under Hazard’s touch. The feathering of Somers’s short, blond hair against Hazard’s cheek. The now-familiar lines of Somers’s hand knotted with Hazard’s. For a moment, with the sun shining on his back, Hazard felt translucent, transparent, crystalline, as though that sunlight shone through him and turned all the hard edges soft, turned all the dark spaces bright.

The tone of this book was much darker and grittier than those of the earlier books. There were sections where things looked grim.

Maybe it’s because I’m a romance reader at heart that I wanted to bask in the glow of the previous book’s romantic developments for a little longer before things got really hard for John and Emery as a couple.

When I step back from the book to take a look at the six-book arc of this first series, though, I can see that every bad thing that happens to the characters and their relationship in this book is necessary and serves a purpose. Indeed, had the book had not dug so deeply into Hazard and his trauma, had the story not jeopardized his happiness with Somers, it would have been a lesser book.

So… I come back to expectations as the main reason this book gave me pause.

This was a pretty strong and important book for the series but not the one I expected. B-/B.