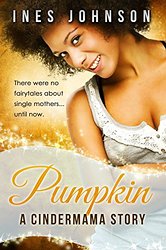 Single mother Malika “Pumpkin” Tavares lost faith in fairytales after she fell for a toad. Now she believes she’s not cut from the storybook, heroine cloth and searches for Mr. Good Enough amongst the sidekicks and supporting men of the town.
Love at first sight isn’t a cliche for town royalty Armand “Manny” Charmayne. For generations the Charmaynes have spotted their soulmates by seeing a golden aura the first time they laid eyes on The One.

When Manny meets Pumpkin he sees…nothing, but sparks fly off the richter scale. The more he gets to know her the more he considers defying fate, if only he can convince her to take a chance on love again.

What drew me to this book is the wonderful cover and the retelling of the Cinderella story, as I’ve always had a soft spot for that. However lately, I’ve been looking for stories that are updates of that fairy tale that fit better with modern women and times. From the excerpt I got that Malika – or Pumpkin as her family calls her – can stand up for herself and has made a life for herself and her son through her own hard work. She sounded like a heroine I wanted to know better.

Most of the Cinderella characters were there but in modern guise. Pumpkin of course is the heroine – a woman of intelligence and humor who thought she’d found her Prince only to discover he was a frog. Her thoughtless twin cousins and aunt are the relatives totally wrapped up in themselves and who’ve relegated Pumpkin to the unloved sidelines most of her life. Manny is the politician prince from a wealthy family with the reputation of a playboy but who passionately desires to put his parents’ work ethic and spirit of helping others to help themselves in action. His aunt, who gives Pumpkin dress and makeup tips as well as bolstering her self pride, is of course the fairy godmother. But there are a few new characters as well.

Pumpkin’s job as a teacher isn’t just a character list point to be checked off. She might not love it but she takes it seriously. Her son Seth is the center of her world and watching the two of them together is a joy. There are several other staffers working to get Manny elected as well as lots of constituents with whom he interacts so we can see his genuine desire to help people.

I wasn’t expecting the false start of a sideline romance but I ended up liking this guy and hoping he will get his own special story. Meanwhile, this serves to show that Pumpkin and Manny are real people instead of just cardboard fairy tale characters which made them real rather than insipid. Then some honest words from her first husband open her eyes about how she’s been trying to “cast” her life before she stands up to those who have dumped on her for years. Pumpkin’s speech to the reporters dogging her relationship for a news story might get a touch preachy but she says what I’ve seen too often in real life – single mothers work too hard for far too little recognition.

There were a few things that didn’t work so well for me. The misunderstanding that ignites the final conflict which then bleeds into the separation before the reconciliation is straight from romance novel 101. Then the “golden aura” from The One stuff has to be taken with a grain of salt but then this is the retelling of a fairy tale. Finally, in addition to having treated Pumpkin shamefully over the years, her cousins and aunt are portrayed as master manipulators of the social welfare system. Frankly, I was a bit taken aback by it and I wasn’t sure if you were being ironic or sarcastic.

“Pumpkin” is a modern story with a heroine who has risen above some tough times in her past and a family who’ve not given her support. She’s raising her son to be an honorable man and giving back to her students. Readers might be taken aback at the inclusion of stereotypes but those aren’t Pumpkin as is made very clear throughout the book. I’m still a bit gobsmacked at Pumpkin’s cousins, but I thoroughly enjoyed her. B-

→ Jayne
Previous article: Daily Deals: From Rhodesia to Cape Town
Next Post: Daily Deals: A couple of interesting YAs and the Peabody sisters