REVIEW: The Ex by Abigail Barnette 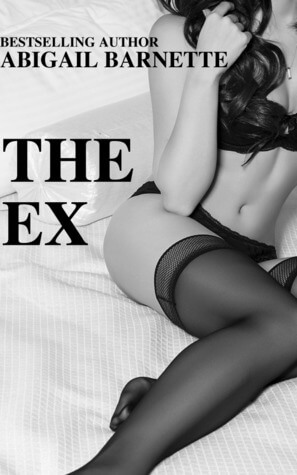 Magazine editor-in-chief, bride-to-be, and soon-to-be-step-grandmother at twenty-six, Sophie Scaife is looking forward to married life with her fiancé and Dom, wickedly sadistic billionaire Neil Elwood. As they enter unexplored sensual territory, Neil leads Sophie to the very edge between pain and pleasure—and she discovers a surprising new side to her sexuality.

While Sophie balances her hectic work routine with her devotion to her unconventional family, Neil has to adjust to life as a retired mogul. With their big day drawing nearer, they have to forge through pre-wedding jitters, personal crises, and an unexpected houseguest to get to their kinky ever after.

But a decades old trauma still haunts Neil. When the private details draw public interest, Sophie learns that the scars of his past are greater than he let on—and he’ll need all of her love to heal them…

It was a very pleasant surprise to find The Ex was released a little earlier than originally planned.  When I stumbled across it online, I bought it immediately.

The first thing readers need to know is that “the ex” of the title is not Neil (or Sophie). It is an ex of Neil’s from long ago. People (like me) who need their HEA fix need not be worried.

I suppose The Ex might be a close cousin to a romance novel rather than an actual romance novel because, like The Bride, it doesn’t have the traditional arc. Sophie and Neil are already a couple and they have to negotiate various things to keep their relationship healthy. (I love this kind of book). Some of their conflicts and pressures are internal to them, some of them, like Stephen Stern writing a tell-all (but through his own rose-coloured-glasses-perspective of course) biography which outs Neil as a bisexual and which brings up Neil’s traumatic experience of sexual assault, are external. I like Neil and Sophie and I’m happy to spend time with them. I don’t actually want them to split up and I love that when they have conflicts they don’t waste time with silly misunderstandings. Part of the series arc is them learning to be emotionally honest with each other and watching them do just that makes me very happy. I want characters to be smart and emotionally mature.

The angstiest book of the series is The Girlfriend, where the stakes were, literally, life and death. Nothing really threatens the relationship after that. I mean, there are serious threats to the relationship but the reader sees very quickly, that they aren’t going to be issues. Cancer wasn’t going to be solved by patience and good communication is all I’m saying, so I think the stakes were the highest then. This might have the effect, for some readers, of making the later books somewhat anticlimactic. Personally, I’m glad I left a little time between the angst of The Girlfriend before I picked up The Bride – it helped to reset my expectations and catch my breath – but I haven’t found the later books to be at all boring. The Ex is engaging and funny and I liked reading about the issues Sophie and Neil had to tackle and how they did so.

“Don’t you ever do this to me again.” I went from tired and defeated to furious and trembling in three-point-five. Which, I assumed, was fast. It had to do with cars, and I’d heard Neil use the phrase before . Which just went to show how pissed off I was. I couldn’t even think of my own idioms.

Which brings me to my main complaint about the book. I can’t tell if I’m being unfair because on the one hand, the story is told entirely from Sophie’s first person POV so there are things she doesn’t know, or doesn’t know in detail. But I found that The Ex was a bit episodic and at times, sketchy. A big issue would be introduced, it would be acknowledge as a big issue and then, some time later it would be addressed with little more than “Neil had been progressing well in therapy and … etc”. I would have liked to have seen more of the solutions worked out on the page.

The sex scenes were still creative, plentiful and hot, and served to further demonstrate the connection Sophie and Neil have. Neil’s friend, Ian, and Ian’s wife, Gwen, make a bedroom appearance with Sophie and Neil so readers who don’t like partner-swapping or a bit of f/f might want to skip this one. Neil and Sophie have always been honest about their sexual desires and appetites so I never felt any threat to their primary relationship and I didn’t have any particular qualms, moral or otherwise, about it but I know there are many readers who want their h/h to be entirely monogamous. Which is, if that’s your preference, totally fine of course.

Once again I enjoyed Sophie’s breezy style. I had to laugh at this description of her wedding planner:

She’d gotten married two years before, and she’d shown us photos of her amazing seaside wedding at her parent’s home in Nassau. She’d worn heels on the beach, and that was what had cemented her, in my mind, as the perfect person to plan our wedding. A woman who will wear heels in sand is a woman who has no fucks to give about anything.

Sophie’s mother ends up moving nearby and it was fun watching her and Neil negotiate their way around each other. As a fellow control freak, I felt sympathy for Neil at the following – even when I was laughing.

Sundays were fun. Emma and Michael still made it out to see us in the evening, and now that Mom was with us, it reminded me of the big family lunches we’d had at my grandmother’s house when I was growing up. Mom even came beforehand and helped Neil cook, though I don’t think he was as touched by the arrangement as I was.

“Are you sure you wouldn’t be more comfortable just sitting back and relaxing, Rebecca?” His smile was so tight it looked like his face would crack. Looking up from the kitchen table, I mouthed,

“Be nice,” exaggerated enough that he could see it from across the room. He gave me a stern, long-suffering roll of his eyes.

I read this when I was away on holiday and it was just the perfect book for my mood. Easy to drop in and out of, but very engaging when I was reading. And, let’s not forget; super sexy.

→ Kaetrin
Previous article: What Willaful’s Been Reading and Listening To, Winter 2015
Next Post: Daily Deals: From Rhodesia to Cape Town