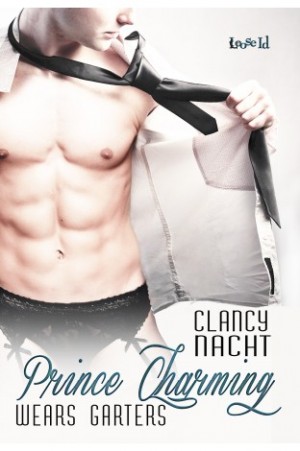 Sara feels like her life is on track. She has the career of her dreams as a senior art director at one of the hot ad agencies in town. Her only real annoyance is the womanizing account executive in the office next door, Chuck.

When Chuck lands a new account, he sets his sights on Sara to work with him, but she gets the feeling he’s looking for more. Working late one night she discovers Chuck’s secret: he loves wearing ladies lingerie. Surprising to her, she can’t resist his long legs in silky stockings and her lust drives her to begin an ill-advised affair.

As a career-oriented woman, she’s not sure if she’s ready to balance her steamy encounters with work life, and she’s positive that trying to date Chuck would be a disaster. Yet, each time they get together she can’t help but speculate on what Prince Charming’s wearing under his well-tailored trousers.

While looking over the latest offerings from Loose Id, it struck me that I can only recall ever reviewing one book with a transvestite character. That was enough to make me request your book. But while I thought I was going to get Lite and Funny, things took a turn for darker while also veering away from the lingerie.

“Prince Charming” has a fast, funny start with the image of prairie dog junior workers popping up over the cube farm that is their workplace to check out the latest office scandal – Chuck’s newest ex yelling at him- or later on – his riveting interactions with Sara. Sound, and gossip, certainly does carry there.

Sara and Chuck are quickly thrown together on a new ad campaign but I liked that Sara is already established and successful at her job. She can yank Chuck’s chain a little and not worry about losing her job as well as putting him in his place a few times to remind him she’s not to be messed with.

The plot then moved zippity quick to sex. The main pull of story could have been utilized more and I wish it had. By the end, even I was starting to think I might share Sara’s men-in-garters fetish. You did make that sexy and hot. Still Sara never asks Chuck what got him started wearing women’s undergarments nor does she ask him where he buys his lacy, frilly, silky smooth, fishnet wonders. But then see above about hot smexy smex in the office – though watch that carpet please.

Dane and Trey are Sara’s two GBFFs but at least Trey is an architect and Dane makes a living at his art production. Yeah it’s a little much with the trip to day spa but they’re happily married so that evens it out a bit. Chuck is already pre-programmed to fall for Sara due to her ex’s rants which told him that this unknown woman was his perfect match. That helps my belief in his belief in their relationship jump starting so quickly.

Chuck’s angsty back story life also gets ladled on which moves their feelings way deeper than would be expected but with a shorter page count, every shortcut to emotional intimacy counts.

Sara really has the sh*t luck in her jobs and this is where the book took a sharp right turn into the dark side that I wasn’t expecting. All of a sudden, my fun flirty little read is all Really Deep Shi*t and where did that come from? Should I have been expecting this in a book set in the advertising world? Is it still Mad Men and sexual harrassment for all women in that industry regardless of their position? Wow.

Which leads me to warn about triggers. The scene is written so well that I was with Sara in feeling helpless as it progressed. I just wish she had been the one to administer a sharp kick where it counts but I guess in the end, she and the others hit the whole agency where it hurts.

Sara’s initial shame and feelings of responsibility for what almost occured make me sad for her and mad at the world that this still happens. I mean really? Even her female mentor was going to let this go on? Wow. Just makes me so glad my profession is not this way.

I like the funny, I like the sexy and I’m still turning over my thoughts about liking the lace (though I wish there’d been more of it) , plus I always like cats but I think readers need to be ready for some office harrassment and the “quick on the draw” relationship. B-

→ Jayne
Previous article: Thursday News: Bookstore sales down, Should Twitter users police themselves, reproductive justice and anti-black violence, and screen adaptation of A Wrinkle in Time
Next Post: REVIEW: You Make Me (Blurred Lines, Book 1) by Erin McCarthy