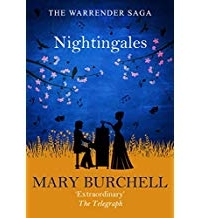 Difficulties were meant to be overcome…

Little did Amanda realize the full meaning of Jerome Leydon’s words, although she had taken the famous composer’s advice and sought lessons from the gifted Dr. Lewis Elsworth. Lewis had been patiently training her voice for several years.

Should she forsake talent for money—follow her mind or her heart?

Amanda Lovett is yet another young wannabe singer in England who has lots of stones strewn on her path towards stardom. For years she’s nurtured her own dreams in the shadow of her brother and sister-in-law’s dashed hopes. Henry Lovett was a famous race car driver until a devastating accident left him near death. Lucky to have learned to walk again, he sinks all his money into buying a small, boutique hotel. Nan, his wife, once had a promising singing career but had to give that up in order to help manage the family business and raise Young Clive (yes, that’s what Burchell calls him). Once she’s finished with school, Amanda joins them to do odd jobs. But she also secretly takes voice lessons from the local church organist and sings in the (quite good) choir.

Amanda can’t bear to rub this in Nan’s face and so keeps most of it hush-hush including the fact that a rather good composer was the one who heard her and then urged her to contact Lewis Elsworth who, despite his stuffy name, is actually a young and dedicated music teacher who demands the best from Amanda. All this brings the great Sir Oscar Warrander and his wife Anthea to hear Amanda sing. Amanda isn’t ready yet but perhaps after another year of hard work she might have enough technique for Sir Oscar to become more interested in her.

Things take a turn when the composer who first noticed Amanda tries to entice her into taking a role in his new musical – a smart, sophisticated but perhaps too risqué work for Amanda’s taste. When he hears of it, Lewis forbids Amanda to have anything to do with Jerome Leydon or his trashy colleagues but Amanda desperately needs money and rather quickly. Perhaps Sir Oscar might advise her? But we all know from what Oscar told Anthea in the first book of the Warrander Saga, “A Song Begins.” There’s going for the cheap and easy career or there’s working your @ass off and reaching for the summit. Which will Amanda choose?

Across the series, Burchell mixed and matched her musically talented characters and once again we have a singer and composer duo. She revisits the hard work that a classical singer must endure in order to take a God given voice and actually make something of it. It’s not enough to be able to sing. One must work and train to control it, to learn to use it properly and to add the drama and stage presence that will elevate one above the common “good singer” to become a great one. There will be exhaustion and there will be tears along the way.

Amanda has a good reason to need the money that taking the easy way would bring her. I was not surprised at the answer Sir Oscar gives her but was a little gobsmacked at what he suggests as a solution and loved the answer he gives Anthea when she questions him about their relationship. Perhaps he’s mellowing a touch or maybe it’s just that he’s still that in love with his wife.

Burchell lets us see enough little things about Jerome’s attitude to know where Amanda ought to place her faith. There are a few scenes during which Amanda tamps down her unease with him that make me sigh at how women felt and still feel the need to smooth things over despite how they really think. She does stand up for herself though and curtly or coolly pushes back a few times. She also faces down Sir Oscar a time or two as well as Lewis which makes her scenes when she questions them about her abilities as a singer and singing in a particular work seem more a professional being sure rather than a wimp needing a spine.

As a reader, I could tell that Amanda and her leading man were unconsciously working on falling in love long before they did. In true Burchell fashion, lots of other characters saw it too. Here Sir Oscar helps things along more by his usual efforts to get a voice trained for greatness instead of acting as a matchmaker – though he does do a touch of that in the end. Sir Oscar doesn’t suffer fools or slackers at all and I can only imagine what he’d make of our “everyone’s a winner” modern viewpoint. In the actions of some other characters, Burchell shows just a bit of the envy and anger that others feel for him. Haters.

I think the book works better as an exploration of what a talented person goes through to hone their gift. There are hints and glimpses of romantic feelings between Amanda and Lewis but nothing is overtly said or done for most of the book. After a lot of time spent on showing how hard Amanda works and is trained, the last part of the story kind of zipped over some of the work that went into creating what propels Amanda and Lewis to stardom but maybe that’s because this creation process wouldn’t be riveting on the page. This one ends a B/B- for me.

→ Jayne
Previous article: Janine’s Best of 2018
Next Post: REVIEW: The Splendor Before the Dark by Margaret George