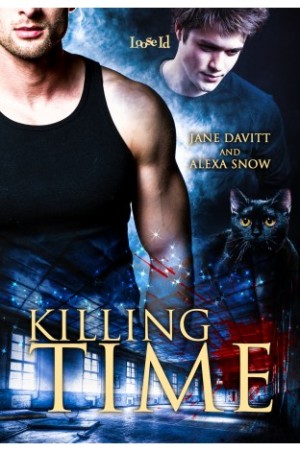 Max and Kaelan, best friends and business partners for five years, are powerful casters with a tendency to get themselves into and out of all kinds of trouble. Pretty much the only thing they’ve been able to avoid is getting romantically involved – until now. Their sexual attraction hits them like a runaway fireball and they can’t keep their hands off each other.

While their sexual attraction burns out of control, they’ve attracted the attention of a dark caster named Jannes who’s planning a spell so potent that it could end the world. To keep them off balance, he’s targeting Max and Kaelan through those they love, and there’s no one they love more than each other.

With friends and family to protect and their only allies a group of casters who find it easier to fight than cooperate, the odds are stacked against them. So can Max and Kaelan keep it together and stop Jannes before he ends the world, or is the best they can do just killing time?

I enjoy your writing a lot. I think your books are well written, but I will not deny that part of the attraction for me is that every single story that I have read by both of you has the antagonistic chemistry between the leads. I am not saying that you keep writing the same story over and over, quite the contrary, I thought that in every book you manage to keep the antagonism and change “from enemies (or kind of sort of enemies) to lovers” believable and different.

Having said that, even such a goner for this trope as I am, I was eager to see if you could do a different type of chemistry and this book certainly is different. As the blurb tells us, what we have here are friends and partners who may be attracted to each other, but who fight this attraction till they cannot fight it anymore. Unfortunately, the way it was done kind of irritated me almost from the beginning.

Max and Kaelan meet in the prologue of the book – when Kaelan saves Max from a tough spot during a dark magic casting which he accidentally (or so he thinks) gets to witness. So far so good – I was looking forward to see where the urban fantasy setting would take me, because I love when a story deals with magic, any kind of magic.

In the first chapter, however, we learn that five years had passed and during that time Max and Kaelan have become best friends and partners in their magical business. They are trying to help people in many different magical ways, such as saving them from their own stupidity if they can (like a young idiot who summons a demon to bring her fiancé back to her). Sometimes they are successful, sometimes they are not, but they certainly try hard. Max is very good with shields and Kaelan is good with creating portals. They try to learn from each other, they know each other strengths and weaknesses; sometimes one walks in on the other having sex with the occasional guy here and there. In other words they are really close. They are so close that if Kaelan has nightmares, he has no problems with sleeping in the same bed as Max and having Max comfort him, and Max is fine with this too.

If one asks me what is wrong with this picture, with two friends being so close, I would say normally nothing. The only problem I had is that these guys are really really attracted to each other in a romantic way. I was not quite sure when they realized that they were attracted to each other as more than friends, but it certainly happened some time during the five years, somewhere between the prologue and Chapter One. I would have loved to be a fly on the wall when it happened. Instead the source for tension is that both of them are trying to squash the attraction and not to act on it. Why? Apparently it will make them more vulnerable/uncomfortable/ and it will stop them from being friends.

And I keep thinking no. It feels like an artificial construct created by the authors in order to make the guys put their romantic attraction on hold till the story really takes off. I want to be very clear – I am not saying that I would love to see them being attracted and act on it the first time they met (or second, or third, really). I understand that the writers tried to do something better than Insta!Love, but in this specific set-up it did not work for me. I felt that they acted like romance novel heroes instead of real people, because apparently as the events of our story unfold, while they still think a little about weird obstacles which they create in their minds in order not to act on their attraction, they surely do act on their attraction and time- wise in the story it happens pretty fast. The story doesn’t contain gratuitous sex scenes, I thought whatever was there moved the story and their relationship forward, but I was rolling my eyes and thinking, why are you so convinced that you cannot be friends and partners if you also want to have sex with each other and maybe have a relationship too?

But I digress – I’m spending a lot of time explaining what irritated me and why I lowered the grade as much as I did, but in spite of these criticisms I really enjoyed Kaelan and Max as a couple and the urban fantasy plot of the story. I thought that when they allowed themselves to be together, they had great chemistry. I thought that because they became such good friends, their romantic attachment actually had more chance to stand the test of time, not less. I even thought that there was some character development taking place for both of them.

I thought the Big Bad Evil whom Kaelan and Max found themselves against was scary, and his motivations made sense to me. He was evil through and through, but he did not feel like a caricature, maybe because of his origins. I thought that the reason for his actions had a nice twist (not too big, but I did not see it) and I enjoyed how it was done. The magic system and how it worked in the world the writers created was very well explained, even if sometimes it was a bit overwritten (but it was not a huge problem for me – I enjoy different set ups for magic to work in different worlds). The only things which for me were too much explanation- wise were the excerpts from different imaginary magical literature which were put in front of every chapter. Sometimes they illuminated something important in the chapter in a nice way, but sometimes I was annoyed because the excerpt was trying to explain a magical definition, or spell, which was happening in the chapter already. I felt that it was too much “tell” sometimes, especially if the chapter went on to show me how the thing worked. I do sympathize with the need to explain the complicated magical stuff, but as I said sometimes it was a bit much even for me.
I also thought that at times the book was really funny.

“The creature must have thought they were dentists, because it opened wide, and the resulting blast of fetid breath came close to making Kaelan puke his guts out right there.
“I never knew halitosis was a lethal weapon,” Max said. “God, that is rank. And if you like the gel that much, buy some of your own.”
“Where is the fun in that?”
“We’re discussing this later,” Max said.
“If we have a later.”
The sea monster – Kaelan was referring to it as Nessie in his head since Max had labeled it female – decided now was a good time to try to eat them again. The shield had it back but compressed under the attack, bringing Max down to his knees next to Kaelan.”