REVIEW: Into the Light by Ellen O’Connell 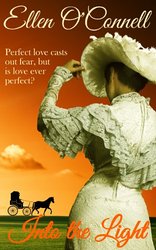 Kansas 1899. Deborah Sutton barely remembers her family’s feud with the Van Cleves. Her mother died that summer, and her father was killed. Nothing else mattered to seven-year-old Deborah eighteen years ago. Still, Deborah knows the Van Cleves tried to steal her family’s land, and she despises them for it.

Trey Van Cleve does remember the land war. Trey saw bloody bodies hanging from the roof of his home and fled fire in the night. The monster under Trey’s boyhood bed had a name, and the name was Sutton.

One night when they both seek solitude in the same shadowy park, Deborah and Trey meet. Each is intrigued by a mysterious stranger who is no more than a friendly voice in the dark. Learning each other’s identity is an appalling surprise. How can a Sutton befriend a Van Cleve? How can a Van Cleve love a Sutton? Deborah and Trey are going to find out.

Two and a half years ago I fell in love with Caleb and Norah Sutton. After finishing “Beautiful Bad Man,” I scurried over to buy this book. It didn’t wow me quite as much but any book with Caleb and Norah, even as secondary characters, is a good read.

“Beautiful Bad Man” was chock full of villains and external conflict. “Into the Light” is a quieter story about internal battles fought over personal demons. Both Deborah and Trey have to find a way into the light – Deborah from what happened to her as a child and Trey from his injuries and the pall his father’s actions have thrown over the whole family. Though the characters, town and relationships carry over from “Beautiful Bad Man,” this book can stand alone. There is a villain but he mainly serves to provide reason for Trey and Deborah to work together.

The recap at the beginning is a reminder or introduction for new readers of the bare bones from “BBM.” There are a lot of characters so either pay close attention or wait a bit as most will be revisited, a few at a time, later on. The Van Cleve’s and Suttons have enmity that goes way back. Webster Van Cleve started it but Cal Sutton – the Bad man – finished it. Now years later a second generation meets. The way they meet is a little contrived but since Trey has been away for years and Deborah mainly stays at her Aunt and Uncle’s farm, I can buy into them not immediately recognizing each other. After their initial encounter, each wants there to be a second one.

This is a big step for Deborah who flinches from touches – even from family – and has avoided all efforts to spark her interest in courting or marriage. Trey finds a woman whose mind makes him want to know her better and in the quiet dark they feel free to reveal secrets about themselves never told to anyone else before. When the truth comes out, feelings and tempers flare but they can’t keep from thinking about each other.

Trey does some investigating and what he’s told makes him wonder and then, putting the clues together, he deduces Deborah’s closely held misery. And Trey thinks that if anyone can help her, it’s him. He knows all about getting a helping hand after his battle injuries and trying to escape his father’s plans for him.

An apology and a change in profession later, Trey also realizes he might have the means to help Deborah. He can at least offer this chance to her and see if she’ll take it and also help him out. The other thing he wants – a relationship with Deborah – might just prove beyond what Trey can engineer.

This is a different book in many ways from what I’m used to in an O’Connell story which might have colored my opinion of it a little. Firstly, Trey is the one being physically beaten up when the story starts instead of the heroine. He’s the character who must overcome physical injury. Deborah’s injuries are emotional and mental and they’ve left her afraid of physical contact even from those she loves. TRIGGER WARNING – her sexual abuse took place as a child and is never described on page but the damage to her lingers. I felt her depiction is sensitive yet realistic. Trey faced trauma in his childhood and we see this still affects him a little when he tells Caleb Sutton that “Cal Sutton” is someone Trey feared as a child but “Caleb Sutton the family man” might be someone Trey could be friends with.

And it’s Caleb and Norah’s obviously happy marriage that spurs Trey’s desire to woo Deborah. Trey wants what Caleb has – a loving wife who will kiss him in public and laugh with joy, a home and children. But even Trey begins to have his doubts that Deborah is capable of this kind of relationship. Still if he can help her dig deep and find then nurture her courage, he’ll be happy.

Trey and Deborah speak of the events of their childhoods, discovering similarities they share that no one else understands. Frankly their fathers were shits and worse. Little by little, Deborah gains strength to challenge herself professionally and when Trey is threatened, she fears a life without him. Her emergence from her shell – or as much as she’s going to – seemed a little pat by the end of the book. Trey’s contentious relationship with his father was pretty much already a done deal and we never saw much of them squaring off.

The villain and his threat to Trey was a weak part of the plot for me. It seemed to drag too long and at times seem unrealistic in how it was able to be carried out. The resolution was a bit anti-climactic and more “thank goodness that’s finally done.”

I liked this book, but I didn’t love it. It changed things up from what I’m used to and I admire the chances taken but a lackluster villain portion of the story didn’t help it while the wrap up of Deborah’s battle with her past was a little too quick. B-