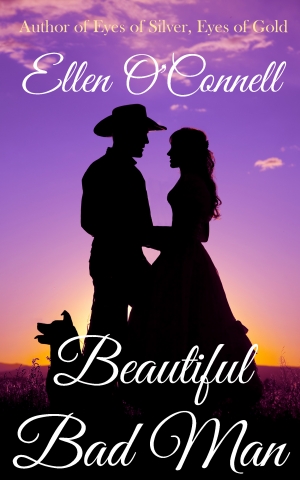 NOTE: The hero relates his abuse as a child and his nieces are rescued from implied abuse.

In 1866 on the empty Kansas prairie, two children shared a few desperate moments that changed their lives. For years afterward, each nursed a secret dream – that the other had grown into a special person – brave, good, kind.

When Norah Hawkins and Caleb Sutton cross paths again, dreams die. She is a bitter, suicidal widow. He is a gunman with little conscience and few scruples. Alternately angry, repelled, and attracted, the two form an uneasy partnership to hold land she owns and he covets against a marauding neighbor. Their bargain never included love, or did it?

When I reviewed “Without Words,” last year, this book was recommended to me, which was a good thing as I already had it in my reading queue based on the excerpt I read at Smashwords. Since I was ahead on my reading commitments, I took the chance to sneak it in. Turns out ML’s rec was right on the money. I also love that Early made the book cover.

So far in the books I’ve read, your heroines have been women who have started with little agency but who have grown in strength – yet not in anachronistic ways. These women aren’t “romance book cover” beautiful despite their hard work on the farms. They don’t initially dazzle their heroes. Instead the harsh life bleaches them to gray and drab as much as it bleaches their ugly clothes. Instead it takes time for them to blossom again. There’s lots of bad in this book but lots of sweet and good to balance it. Yet it’s not cloying sweet but rather amazing, “eye opening for both Norah and Cal” sweet.

Initially Cal is angry that the Girl has grown up without the courage she showed in saving him from a crowd of belligerent drunks. Norah is angry that the Boy she saved, who should have grown up to be a doctor or other kind hearted person, is now a gunslinger. She also considers him to be interfering for stopping her from dying and staying on her land (for a very particular reason that we learn later). Bless him that he’s so startled when she proposes a partnership marriage and even more stunned at the wedding vows since promises made to him have never been kept and he’s thought little of keeping his. But the ones he makes to Norah count to him – count a lot.

As for Norah, she knows what Cal has become and enters things with open eyes. Initially he scared her a little and made her mad a lot when he got her to keep from giving in and giving up. But he’s shown a good side through things he did for her in town before marriage even got mentioned. He’s very bad but he’s not as evil as she thought. He’s also kind to animals, in fact kinder than he is to most people. He’s also worried about what kind of father he would be which says a lot about him. The sins of the uncle need to be ended there and Norah, along with some helpful suggestions, will see to it. Cal will still probably drag his feet a bit in telling Norah all his plans but she’s working on him.

Cal is bad. Very bad but also very honest and open about being bad and what he does, he does for a reason, not just for fun like others. He sees everyone as either a predator or prey and he knows which he’d rather be. Norah doesn’t easily take to being bad. It horrifies her but, to her annoyance, Cal keeps reminding her (somewhat jokingly) about the “submission” part of her vows. And she’s honest enough with herself to admit that she married him and wanted him for his toughness, for the fact that he will do what is needed for them to survive. The ruthless man they’re up against and the ruthless, soulless men he’s hired serve to bring Norah and Cal together, an “us against them” mentality that serves them well

The reason for her to suggest marriage makes a hell of a lot more sense than some of the round-about-tation excuses presented in Romance novels. Norah’s is a practical solution that will help both of them. But she likes the side benefits she gets even if they might have come courtesy of what Cal learned in brothels.

To her astonishment, Cal wants to hear her opinions and views on the farm whereas her father and first husband never did. Cal does something better though. He shares his dreams with her and Norah realizes how different that is. Each new thing is a revelation to Norah about marriage and married life. But then, Norah reminds herself, she thinks he’ll leave as soon as he’s bored and she won’t have to live with a bad man until death. Still, she soon realizes she’ll miss him if and when he goes.

Slowly they begin to work towards being as open with their personal worries and concerns – Norah about whether or not Cal slept at the Royal Flush saloon and Cal about Joe, her first husband. Of course Norah doesn’t know Cal’s dark place where all his ghosts live and come out to haunt him. She got a glimpse of it though, through the children of Cal’s cousin whom they save. Then she learns the truth and tries to get Cal to do something to lesson his guilt and his horror that his uncle was right about him.

Cal’s smart and also street smart. He gets Van Cleve to authorize his early thievery on behalf of Norah, he can size up an opponent and predict from where he’ll ambush and he knows exactly what Van Cleve’s next moves will be. Even knowing Cal – the violence that suddenly erupts took me by surprise. Finally Cal’s efforts start to bring the rest of the beleaguered sod busters together as a whole instead of trying to stand alone.

The Western trope of a man pushed to his limits who finally decides to take a stand is a time honored one. Up until then, Cal has never stood – figuring, rightly in his case, that staying ahead of the law was his best option. Now he’s decided he likes where he is and is willing to fight to stay there. We also see the neighborly ways that are needed for survival then. Neighbors help each other through thick and thin knowing it’ll be returned if needed.

As tough as Cal and the men are, the women are tougher. Mentally and emotionally if not physically. They’re the ones who have to wait for the results, who have to dig out bullets, cauterize the wound and wait to see if their man lives. Norah discovers she loves someone again enough to cry. And Granny gets disgusted that the dog is going to moon over this killer as much as Norah is. OMG I love Granny Johnson. Hearing her comments on Cal is worth the price of the book alone.

By the end, Cal’s methods work and he gains respite for himself and the others the only way possible that wouldn’t end with him in jail or on the run. His response to how Van Cleve thinks of his daughter gives the 103rd reason for Norah to love him. He’s done enough for Norah to promote him from “evil” to “very bad” then provides her with justification to raise him all the way up to merely “bad.” I’m so looking forward to the next book in the series and eager to see how the next Sutton – Van Cleve generation will work things out. A