Since beloved children’s book author Diana Wynne Jones passed away a few years ago, this review is addressed to you. 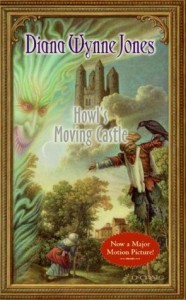 My husband and I read the classic YA novel Howl’s Moving Castle recently. It was a fun and funny novel and I enjoyed it, but I didn’t love it as much as my husband did.

The protagonist of Howl’s Moving Castle is seventeen year old Sophie Hatter, the oldest of three girls raised by a couple who owns a hat shop in the town of Market Chipping, Ingrary. For Sophie, being born oldest of three is the beginning of her troubles.

You see, as everyone in the land of Ingary knows, the role of successful fortune-seeker is reserved for youngest children. Oldests are merely the ones who fail first. And Sophie, as the narrator tells us, isn’t even the child of a poor woodcutter, so she feels she has no chance of success at all.

Mr. Hatter, Sophie’s father, dies early in the novel, leaving behind considerable debts. Fanny, Sophie’s stepmother, decides to place her beautiful middle daughter Lettie as an apprentice in a bake shop, and her youngest, Martha—the one most likely to find her fortune should she seek it—with a friend who happens to be a witch, so that Martha can learn some magic. Sophie will remain in the hat shop, since she is skilled at sewing.

Hat-making bores Sophie, but she is good at it. The longer she stays at the shop and house, the harder it becomes for her to leave. One day she forces herself to do so and goes to visit Lettie at the bakery. Only Lettie turns out to be Martha. Martha and Lettie, it seems, switched places in order to do the things they are most interested in doing.

Martha warns Sophie that Fanny is working her to the bone and tells Sophie she deserves a wage. But Sophie isn’t very assertive, and when she returns home she doesn’t pursue this strongly enough. Sophie worries that she’ll be stuck in the hat shop for the rest of her life, but fate has something different in store for her.

One day, the Witch of the Waste stops at the hat shop in order to sneer at the hats on display. Even the ones Sophie suggests she try on meet with contempt. When Sophie stands up to the witch, the witch casts a spell on Sophie which turns her into an elderly woman.

Fearful that no one, not even her loved ones, will recognize her, Sophie leaves home at last, intending to find a way to undo the spell. As she wanders on a hillside, Sophie acquires a walking stick and performs a kind deed for a scarecrow.

Sophie doesn’t even realize that she has somehow talked her stick into magical wand-like properties, but when she stumbles across Wizard Howl’s moving castle while in need of shelter from the cold night, she and her stick manage to briefly bring the castle to a halt.

Wizard Howl, an enemy of the Witch of the Waste reputed to suck out young girl’s souls or eat their hearts, lives in the moving castle, but he isn’t present when Sophie arrives. Instead, Sophie meets Michael, his young apprentice, and Calcifer, a fire demon who resides in the castle hearth and operates the castle’s movements.

Michael and Calcifer allow Sophie to stay put, and when Howl finally arrives, he does too. Sophie makes herself useful by cleaning the castle and putting it in order—much to the chagrin of the castle’s other residents.

Howl, Sophie discovers, is younger and more charming than she expected, and not the menace she supposed him to be. He doesn’t suck out young girl’s souls or eat their hearts—but he does break their hearts much too frequently and too easily for Sophie’s liking.

Will Howl break Sophie’s heart too? Will Sophie break the contract between Howl and Calcifer? Will Sophie destroy Howl by sweeping away the spiders that occupy his bedroom? Or will the Witch of the Waste get to Howl first? And where do Sophie’s sisters and stepmom fit in?

Howl’s Moving Castle is a difficult book to classify. Clearly it is not written for adults, and its content is relatively innocent and to my mind suitable for tweens. Sophie may be seventeen years old, but this doesn’t read like a book for kids in that age group.

Moreover, while I typically think of YA novels as having a young protagonist whose viewpoint is integral to the novel, I didn’t feel I got this here. Sophie was only technically seventeen. It wasn’t just her appearance but also her personality which was altered when the Witch of the Waste turned her into a woman in her seventies, so what we actually have here is a kids’ books written in omniscient voice which is infused with a senior citizen’s POV.

Nor is there a coming of age element in the story for Sophie or for any other character. That doesn’t make it a bad book by any stretch, but it does make it something different than what I expected.

There’s a lot of humor and cleverness to Howl’s Moving Castle, as my plot summary hopefully illustrates. I enjoyed the fairy tale elements which were given nifty little twists here. I liked that Sophie had her own magical power and that she eventually learned how to use it.

The worldbuilding feels simple and almost basic; the world mostly takes its inspiration from England, but it is entirely consistent and magic doesn’t come to the rescue for the characters—they have to figure out how to make it work for them, something I appreciated.

There is also a great deal of charm to the narration. For example:

Percival meekly did as she said. He was no fun at all to bully. Sophie suspected that was why Howl had sent him with her. She snorted, and took her anger out on the weeds. Whatever the stuff was that had killed the daffodils, it was strong. The weeds in the drive died as soon as it touched them. So did the grass at the sides of the drive, until Sophie calmed down a little. The evening calmed her. The fresh air was blowing off the distant hills, and clumps of trees planted at the sides of the drive rustled majestically in it.

Sophie weed-killed her way down a quarter of the drive.

Still, I didn’t feel as much emotional investment in the narrative as I wanted to feel. Perhaps it was that I was never convinced the Witch of the Waste was a true danger to Howl or Sophie. Perhaps it was that Howl was so collected most of the time (even his tantrums seemed partly deliberate, a show for others) that his cucumber-coolness failed to persuade me that he was actually afraid.

Or maybe it was that the romantic elements were so muted for most of the book. With Sophie in her seventies and Howl pursuing young women left and right, I didn’t feel that there was that kind of spark between them until pretty late in the story. A romantic angle can really help to engage me but here it was only partially successful in doing so.

I also tend to prefer YA novels aimed at an older audience than this one was. I know this is a much loved and highly regarded book, but for me, Howl’s Moving Castle rates a B-.