Pro-golfer, Mallory “Birdie” Bird is in a slump. Financially cut off by her father, she’s desperate to increase her winnings. Living with the guilt over a two-year old tragic event, she’ll do whatever it takes to iron out her game-even hire a new caddy. 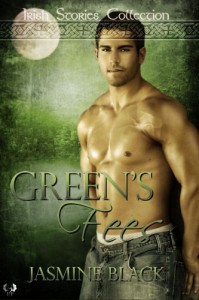 Caddy Green Sloan’s the best in the business. He knows the game better than anyone, and he’s never seen a green he couldn’t read. But he’s got a shady past he can’t shake, and no one’s willing to take a chance on him. That is, until a wee bird enters his clubhouse.

But she’s snooty. And he’s arrogant. Together, they spar nonstop. Driven by necessity and fueled by passion, they need each other on and off the course. But can they let go of the past and learn to trust again?

I will admit I am a shameless slut for a good play on words and it’s the first line of the blurb for your book “Green’s Fees” that made me say “I’ll try this one” when DA was offered a chance to review new books at Lyrical Press. That and the fact that I don’t see pro golf used as the sport du jour in many romance novels. Or women featured as the athletes. So with those three things urging me on, I started to read.

I found the book to one of those “hard to grade” ones. There are things I really liked and things that didn’t work so well for me. The book centers on golf and by that I mean really centers on it. Golf isn’t just used as a backdrop then ignored but even with this emphasis – that I enjoyed – a few things puzzled me. Now I have only taken a college PE golf class and from that I learned that the sport and I should probably keep our distance from each other so bear with me.

Would Birdie really be trying to make a go of being a pro golfer with her casual attitude? Birdie’s used her BFF as a caddy for two years, a BFF who admits she isn’t that good at caddying, she’s gone that long seemingly without asking anyone to help her with her “push,” she doesn’t appear to be able to read a green to save her life and she’s very lackadaisical about the amount of time she needs to devote to improving her game. Has no one told Birdie that this is hard work and she needs to apply herself to it as if she’s covered with super glue?

On the other hand, you’ve made Green come across as a man who does know what he’s doing as a caddy. I know that golfers rely on their caddies to do more than schlep their golf bags around and he acts like he knows of what he speaks. I’ll admit that I’m not sure if the fact he was banned from the men’s tour and not the women’s would hold water but the reason for the ban and the conflict it causes between Green and Birdie seems realistic rather than flimsy and for that I’m grateful.

Green and Birdie both have some growing and changing that is needed and despite the short length of the book, it happens. Green did bad because he initially wanted to help his family but then he slid into helping himself. His care for Birdie and good deed at the end proved to me that he’s made the turn to thinking of others that is needed for a long term relationship. Birdie, bless her, is young and more than lives up to her father’s opinion that she needs to grow up and mature. Green is really the one who jump starts this with his demands that she apply herself but he also gets her to begin to accept that she shouldn’t eat herself alive with guilt for what happened in her past. Major kudos that it’s not just the sex between them and a short discussion that cures Birdie. Instead Green gets her to agree to talk to a therapist.

There’s lots of sex in this book, short though it is. Again, some of it is fine by me and some of it icks me out. When I read the blurb, I didn’t realize that I’d be getting some voyeuristic sex. When Green starts banging Birdie’s BFF, right in the RV when Birdie’s within eye and earshot of them, I went “eeuuuwww.” When it appeared that a menage might be in my reading future, I squirmed until the coast was clear. The “scene” of f/f made me wonder if I had totally misread the blurb and somehow missed that all this was going to happen. I have nothing against any of these scenarios – if I know that they might occur. As it was, I felt blind sided. And the fact that a menage didn’t take place, makes the fact that Green and Jeannie know each other’s “0” faces distasteful to me.

But I said some of the sex works for me and indeed it does. Once Birdie and Green – who’s really wanted Birdie all along – get together, I see real concern and caring for each other. And the hot sexing does more than entertain. Through it, Green shows Birdie how much their lovemaking, vs just hawt sex with anyone else, means to him and helps her to realize that she is worthy of being loved vs, again, just banging body parts together. Too often later sex scenes in romances seem gratuitous and mere filler to me so to have one actually advance the relationship between hero and heroine is more than nice.

We’ve had discussions at DA about how non-American characters’ speech patterns are portrayed. When I discovered that Green is Irish, I braced myself. Would I be assaulted with “me buckos” and other standard “hey, this character is supposed to be Irish!” speech? Well, he does call the heroine his “wee bird” a lot but I appreciate the fact that the rhythm of his speech is as much an indicator of his country of birth as the Irish sayings he loves to befuddle Birdie with.

So did I like the book? Yes and no. Did it work for me? Yes and no. Would I recommend it? Yes and no. See, hard to grade. I guess that whether or not a reader would like it would depend on their particular like/dislike buttons. For me, it comes in around a C+/B- but I am glad that I read it.