REVIEW: Clara’s Soldier: A Retelling of the Nutcracker by Brittany Fichter 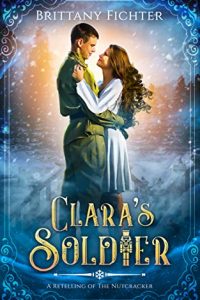 A bride-to-be without answers.
A soldier who never came home.
A nutcracker that might hold one last Christmas wish…

World War II has been over for three months, but Clara can’t join in the Christmas festivities with her friends and family. The fiance she sent off to Europe three years ago never returned. But just as she’s about to give up hope, her godfather might just have one last miracle up his sleeve.

And it all begins with a nutcracker.

I wasn’t quite prepared for the amount of fantasy that this holiday novella would contain. Given the blurb and the fact that it plays on the Nutcracker, I should have been but it all starts out so innocently …

Three months after the end of the war rationing is starting to ease a little, her family is going to have their traditional Christmas Eve gathering, and Clara hasn’t heard from her fiancé for a year and a half. No word, no letters, no James at all. By this point everyone is beginning to lose a little patience with her. All the men who are coming home are either already there or accounted for. She’s stayed true, she’s never strayed or so much as thought about another man but it’s time she accepted the facts and moved on.

Clara can’t forget the man she’s loved for years, the childhood friend who everyone knew would eventually ask her to marry him. Friends and family might stop mentioning him but she won’t give up hope. When her godfather asks her on Christmas Eve what she wishes for she finally desperately says, just to know what happened to James.

I’ll try to avoid spoilers and not mention anything more but the story manages to blend the events of the Nutcracker with World War II. While at first it doesn’t make sense – and Clara thinks “This can’t be real. What is happening to me – a dream?” – after a while it starts to come together. Things get a little wonky at the end when events come to a head and there were a few loose details that weren’t tied down. But overall – it worked. I especially liked the fact that the reality of men coming home with shell shock wasn’t brushed away nor did Clara feel that she would be able to save anyone through twue love. It wasn’t pushed as a cure-all. Things and people were changed by the war and would never be the same but there was hope and yes, love. B-

→ Jayne
Previous article: REVIEW: When the Tiger Came Down the Mountain (The Singing Hills Cycle Book 2) by Nghi Vo
Next Post: REVIEW: Beowulf by Bryher