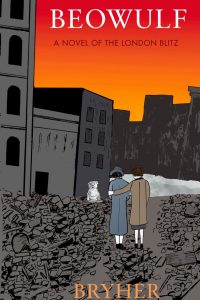 In this reprint of a classic of wartime literature by historical novelist Bryher, life in London during the Blitz is depicted with realism, empathy, and humor

Eighty years ago, the city of London became the target of a relentless bombing campaign by Nazi Germany during WWII that has come to be known as the Blitz. From the period between 1940-1945, over 20,000 Londoners were killed and half a million lost their homes. Bryher, who lived through a good part of those years in London, has provided us with an indelible portrait of day-to-day life from a variety of voices and perspectives from its regular citizens, humanizing the political backdrop of war with their pluck, humor, endurance, and courage. Her two female protagonists who own and operate the local teashop,The Warming Pan, become the heroes of the novel as they work to provide food and hospitality to the embattled community. Certain to appeal to all fans of WWII fiction, Beowulf is an unforgettable reminder of what it was like during that crucial time in Britain’s and the world’s history.

When I read that this novel is actually a reissue of a book written soon after the end of WWII and that the author had lived through the Blitz in London, I was eager to read it. A short biography of the author kicks things off. It’s quite interesting on its own and gives an idea of how Bryher came to develop some of the characters. Bryher is the pen name of Annie Winifred Ellerman (1894-1983) the eldest child of a wealthy man. Very early in life Bryher realized that she was “a girl only by accident.”

In Beowulf, we read one day in the lives of several ordinary people in London who are all variously intertwined because of a tea shop run by two middle aged women. Though it’s never explicitly stated, it is obvious that Selina and Angelina are a couple. They run “The Warming Pan” out of a 100 year old home as well as have a few boarders. Regulars arrive throughout the day, sipping tea and eating the cakes, scones, and muffins that Selina insists be made with real butter and quality ingredients. She believes in giving value for money.

An older boarder mopes about his restricted life since his wife died and his style of painting (what sounded like sentimental Victorian style images) has gone out of fashion. A waitress asks off early to show sympathy at the site of neighbor whose shop got a direct hit the night before and spends the bus ride gossiping with a woman she knows. A young woman revels in the chance to live in London as a working girl and thus escape living with her rural family. A well-to-do married woman has tea with her sister-in-law who is in from where she evacuated to outside London.

An older Colonel tries to offer his services to some government agency only to be told again and again that “thank you but we’ll be in touch if something comes up.” Angelina arrives at the shop with an ugly plaster bulldog statue she found in a shop which she names “Beowulf” and which Selina dislikes on sight. Selina frets about how evacuations have decimated their customers and how she’ll pay the bills due.

Bryher puts the reader in the thoughts, fears, hopes, and worries as they all go through a day moaning about the last night’s bombing and bracing for the night to come. By this point, there is massive destruction around them, broken glass covering streets, blackout curtains to fuss with, rations making everyone tighten their belts, and a slightly worn and threadbare look and feel to life. But also a determined one. They will make do. They and Britain will survive. B