REVIEW: All for you by Laura Florand 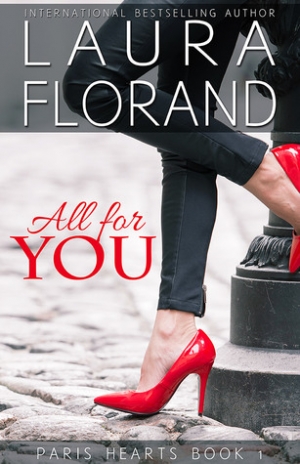 Some crushes aren’t meant to be.

When her older brother’s best friend left to join the Foreign Legion, eighteen-year-old Célie moved on to make a life for herself as a Paris chocolatier. Now, five years later, the last thing she needs is another man to mess up her happiness.

But five years in the Foreign Legion is a long time for a man to grow up, and a long time to be away from the woman he loves.

Especially when he did it all for her.

Half strangers, more than friends, and maybe, if Joss Castel has his way, a second chance…

When Sunita introduced me to your Chocolate series, I had no idea what I was getting myself into. Your books became my own warm blanket. I cannot tell you how often I have read “The Chocolate Touch” featuring Dominique Richard (Dom) and Jaime Corey – out of all the books in the series this one became my favorite. This book starts a new series but it is also looks like a spinoff from Chocolate because it features Celie, a fierce chef chocolatier who works for Dominique. And yes, I could melt because I got me some more Dominique and Jaime.

This story starts when a guy comes to see Celie at work, and when the meeting upsets Celie it makes Dom want to go and take care of the guy, big bad Boss he is. But apparently the guy is Joss, who was Celie’s best friend and protector when they were teens but who left her five years ago to join the French Foreign Legion. Now Joss is back, and apparently he did it all for her, to become a better person worthy of her.

“She wanted to smack him when he said that. She wasn’t any damn freaking goal, she was a person. She’d rather they have been walking hand in hand toward any goals.

She’s rather have come home, the first time she succeeded in making a perfect chocolate for Dom, and crawled onto their bed in tiny apartment because it was the only space they had, to show it off to Joss excitedly and watch him eat it. Maybe even bring it to his lips with her own fingers, because he hadn’t yet had time to wash the grease off his hands from working on some car.

That was what she would have rather.

They would have been happy.”

The whole book is Celie and Joss trying to reconnect, Joss trying to figure out his new life after Foreign Legion and see if he and Celie actually have a chance at building life together, with a little bit of presence from Dominique and Jaime.  I have read several books by this writer by now and her writing style and voice is very easily recognizable – which is not necessary a bad thing. It is becoming a tad predictable, but mostly in a good way. The book is full of easy, gentle sensuality, there is not much angst, and both Celie and Joss are just so very sympathetic even when they stumble and make mistakes. Joss is both vulnerable and strong. He is mostly vulnerable in his love for Celie, because as much as he loved her eighteen year old self, he tried to not show that. Joss tried to be a substitute older brother for Celie because her own brother sucked.

“I didn’t ask him to change his life for me,” Celie said. “Maybe if he was in – in – in – if he had a crush on me, he should have talked to me about it before he did something so asinine. Maybe we could have come up with some mountain we could have climbed together.”

“Yeah,” Dom said, almost absently, focused on the shaping the leg of the lion. “Men don’t always think that way.” He gave Jaime an apologetic look. “We’re kind of raised to want to go out on quests to earn the princess’s hand by becoming a hero. It’s, ah, hard for us to wrap our minds around a princess who wants to do all that dirty with us. Makes us feel – insufficient. Not man enough. Not good enough”.

I loved the way Celie being still in love with Joss and being angry at him was portrayed. Her anger does not disappear right away, it fades away slowly while she gets a better understanding of why Joss left, and while they are learning to communicate better they are getting stronger as a couple.

Along the way, Joss learns to respect Celie’s desire to support him. I am always very pleased how this writer always manages to portray strong guys with *some* alpha tendencies, but never assholes. Joss is extremely proud of Celie’s professional success, but he learns about involving her in his plans and asking her advice and accepting her support. He actually seemed quite eager to learn to me.

I was quite amused about the fact that while Joss seemed understandably influenced by his years in Foreign Legion, for example, he could not relax during their time out with Celie’s friends because he wanted to start patrolling the perimeter and worried about potential terrorists threatening the people around him, he was not *traumatized* by being a soldier to a degree so many other veterans seem to be in the romances I have read. It is not that I do not respect that a lot of vets are traumatized both physically and mentally, but not *all* of them are and I want to see some of those guys in our romances too. So I appreciated that when Celie asks whether Joss needs therapy now that he is out of the Legion his answer is “No”.

I also thought Celie also developed a stronger understanding of how much more she herself achieved because Joss left her to become a better person. It forced her to up her dreams even more, and from the baker in the small town she became a Chef Chocolatier to one of the super stars.

“She certainly had been determined not to stay there without him, and fade and fail under the weight of that place. Become “not good enough” herself.

And now Paris was hers. She was part of this city, part of its vitality and strength, absorbing its heart and energy and pouring her share of it into making the best chocolates in the world. She was part of what people flew here from all around the world to enjoy, part of what made people glad they lived her – her, her contributions to this city.”

I liked a lot that both Celie and Joss were working class characters. Selie loved being a baker ever since she started being an apprentice back home.

Plus she loved it. As she opened the oven to slide out fresh croissants, the vivid, happy smell of that fresh flakiness washed over her and she grinned at Louis.”

I loved that Celie took pride in being a baker and when she wanted to improve her skills even more, she decided to go and knock at the door of one of the rising star chocolatiers and excel there too. Her background is of somebody who knows and loves hard work and who can now create chocolate art with all that hard work.

Joss also comes from a working class background. Before he joined the Foreign Legion he was a mechanic, I am having trouble arguing that Joss actually liked being a mechanic, because he was so focused on making something better out of himself that apparently becoming a better mechanic did not count, but it is not as if he is ashamed of his background and it is not as if he changed to a fancy and glamorous career. He worked hard in his chosen profession and he went to work just as hard on becoming a soldier.

To switch a gears a bit from their background, I want to note that this book does not show much actual sex (it shows some, don’t worry), but this is a perfect example of what I consider off the charts chemistry without them spending every other book page in bed. Every kiss, every touch, every chocolate which Joss tries made me melt all over again.

Their previous separation made perfect sense to me because communication between them was still a work in progress, and the reunion was so beautiful.