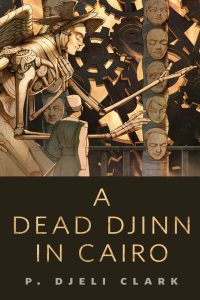 Egypt, 1912. In Cairo, the Ministry of Alchemy, Enchantments and Supernatural Entities investigate disturbances between the mortal and the (possibly) divine.

What starts off as an odd suicide case for Special Investigator Fatma el-Sha’arawi leads her through the city’s underbelly as she encounters rampaging ghouls, saucy assassins, clockwork angels, and a plot that could unravel time itself.

I’ve had this short story for a while but something triggered Amazon to proffer it to me based on something else I was looking at and I thought, “Aha, I never read that after I bought it.” So now I have.

Steampunk generally isn’t my thing but tell me it’s 1912 Cairo Steampunk and I’m much more eager to read it. Special Investigator Fatma el-Sha’arawi has been called out to the scene of a murder. At least it appears to be a murder until she points out that, based on the similarity of the handwriting to his identity card, the dead djinn must have been the one to cast the exsanguination spell that killed him. Wait … he committed suicide?

Following up on a clue at the scene, she plus a local constable, discover an “angel” – or so they call themselves – who pleasantly tells them where they might find the other angel who dropped the clue. They find him alright, along with a pack of ghuls – dead bodies brought back to “life” who feed on the living.

At this point in the book, after a strong start, things get a bit “paint by numbers.” Fatma has some encounters with people who basically solve the mystery for her and all she – and a “woman?” who channels Sekhmet (think ancient Egyptian warrior lioness goddess) have to save the day in a way that even I figured out before they did it.

I enjoyed meeting Fatma who is a tough woman to do her job in an era and place that still expects women to be veiled and stay at home. The setting, especially the inclusion of so many disparate elements of Middle Eastern culture and religions, was fantastic. If this had been longer and allowed for more development of the characters and let Fatma solve things on her own, I would have loved it. As it is, I’m looking forward to trying the next novella in the series. B-

→ Jayne
Previous article: REVIEW: One Day All This Will Be Yours by Adrian Tchaikovsky
Next Post: REVIEW: Quiet in Her Bones by Nalini Singh