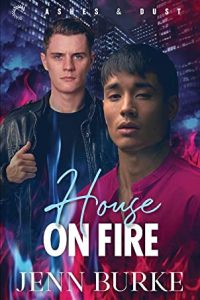 He’s done fighting his attraction to the sexy vampire…

To say former firefighter Colin Zhang is struggling to accept his new life would be a vast understatement. He’s bound to a vampire he didn’t choose, living in a house filled with creatures better left to the imagination—there’s a lot to resent. As much as he tries, he doesn’t resent Evan—far from it. But he needs to know that what he feels is real and that requires breaking their bond. No matter the cost.

Vampire private investigator Evan Fournier is more than willing to explore his connection with Colin, but the crisis at hand keeps getting in the way. Their bond makes it dangerous for them to be apart, so he’s forced to put the other man at risk while he investigates the latest in a series of murders. If he doesn’t find the killer soon, the paranormal community will seek retribution on all humans, not just the guilty ones.

As the tensions escalate, Evan and Colin find solace in each other and their growing attraction. But if their bond is broken, attraction—even love—might not be enough to keep them safe.

Kaetrin:  Sirius and I decided to continue our joint review of this series with the latest release, House on Fire.

Sirius: This is a second book in the series, which in itself is a spinoff from the series by the same author called Not Dead Yet. I suggest very much reading the Not Dead Yet series first, because if you start here, even from the first book I think you will be confused about the world, about the relationship between the characters, about a lot of things.

Kaetrin: I agree. This book is not a stand alone at all and I’m not sure that starting with All Fired Up would really work either. Start with Not Dead Yet for sure.

Sirius: As the blurb tells you the things between Evan and Colin are still very complicated. They are bonded, but the bond between them just happened due to the extraordinary circumstances that they found themselves in the first book and the bond apparently does not act as a normal bond between mates is supposed to act. Come to think of it I am not entirely clear on how normal bond between two mates is supposed to act in this world, but it is not something that stopped me from enjoying the book.

I also want to make it very clear, Colin’s doubts about the bond and desire to break it up also something that I was perfectly fine with. As much as I love well done books which have shifters or any paranormals in the romantic relationship, the fated mates trope often makes me roll my eyes. It is not as if I mind the bond as a plot device , I get it is supposed to symbolize love from the first sight, or something like that. I want two mates to be in love as well, not just be bonded and have the bond as a shortcut for love if that makes sense.

So, I could totally sympathize with Colin, his growing attraction to Evan notwithstanding, he was trapped for so long and he wanted a chance to explore the world on his own, even if he was very much falling in love with the person on another end of it. I thought his doubts and Evan’s desire to balance his very demanding work as part of PI agency gave both characters more depth and the developing relationship became even more interesting.

So I thought *what* happened – made sense, but *when* it happened? Sorry, no. I fully admit that I hate cliffhanger endings, but sometimes I can see how it made sense for the plot development that I hate on emotional level to happen exactly when it happened on the story’s timeline. I saw *zero* reason for what happened at the end of the book to happen at the end of the book. Because we all know how that specific plot development is going to resolve itself right ? It felt as a sequel bait, nothing else . And yes, I was annoyed.

As it was, the romance in House on Fire felt a little flat to me. The characters were in a holding pattern rather than anything being truly advanced. When Evan said “I love you” it felt kind of clunky, way too soon and a bit out of left field. It felt like a forced way of moving things forward.

Sirius: To me, their relationship did advance a little bit, although surely not much. Evan’s “I love you” annoyed the crap out of me. It is not only that he said it and felt too early but also when he said it. I know it probably was not intended, but it felt like rubbing in to Colin.

I keep talking about the romance, but as all readers who like this series know in addition to the romance storyline these books usually have prominent mystery/suspense story and this book was no exception. Our characters were incredibly busy and I can give you no details whatsoever as to what they were busy with – the blurb is silent and I usually try to go by “what is not in the blurb are spoilers”. I loved mystery/suspense in this book as well. I felt that the mood was dark, but it still worked for me and I always love that the relationship is developing along the lines of them being busy and they manage to work and play in a way that does not make me think of them as unprofessional in what they do.

Kaetrin: I had mixed feelings about the book. How much was my reading mood I can’t say but  felt largely disconnected from most of the story. I was very interested in what Colin learned about his ex-fiancee and I was extremely curious about the Priya/Lance “reunion” storyline (still am, truth be told) but those were the only emotional beats that really worked for me.  I won’t give away spoilers but I do have a question about Lance and where the Priya subplot was heading felt too convenient so I’m expecting there’s more to it than we currently know.

There was another character introduced and I had massive consent issues about what happened – but I will say no more!

As for the mystery/suspense plot, some of the characters seemed to escape with no comeuppance – the internal justice of the world felt a little off to me as a result. However, it may yet be remedied in the third book. I did think the resolution Evan came up with was novel and fitting.

The first book, All Fired Up, worked much better for me. I’m giving House on Fire a C. Sirius?

Sirius:  I enjoyed the mystery/suspense story which we cannot discuss due to spoilers, but actually Priya/Lance storyline was my least favorite part of it . I never liked Priya all that much and all that happened just felt weird to me even if the resolution is that what they claimed she did, she didn’t.

It was not my favorite book for sure, but I still liked it enough to give it B-.

“Colin moved to stand beside me, close enough that I could feel the heat emanating from his skin in the chilly night air. I had the sudden urge to lean into him, to sink into his arms, into his warmth, but I resisted it. No pressure, right? Space. I had to give him space. This whole no pressure thing was going to kill me. “