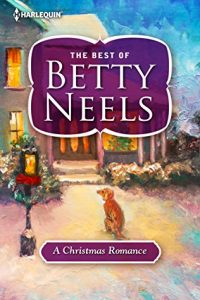 On the night before Christmas…

Office clerk Theodosia Chapman’s can-do attitude and sunny disposition have got her through even the most trying of times. So when her only remaining family withdraw their offer for her to spend Christmas with them, she won’t let it get her down. It looks as if she’ll be spending the festive season alone, until handsome physician Hugo Bentinck arrives on her doorstep on Christmas Eve and whisks her into his world! And Theodosia’s about to find that his love for her is for Christmas — and forever.

One of my first Betty Neels’ books was a Christmas one so last week I looked into others she’d written and realized I had this one in my TBR pile. It’s also a novella and short enough to enjoy in an afternoon. Doctor hero? Yep. Office clerk heroine? Yes, she is. Cat and dogs? Of course. Plus the ubiquitous old family retainers, a lovely London townhouse, a Bentley into which Theodosia is variously stuffed and stowed – along with Gustavus in his carrier and the two dogs? Naturally with tasteful slightly lighter colored leather seats. Oh yeah, and two elderly maiden great aunts who will still be getting a wedding invite even though they don’t deserve one. Even though this was published in 1999, go into it expecting a slightly older sounding setting – maybe late 70s – despite mention of computers and word processors.

Theodosia Chapman is twenty-five, “not pretty, perhaps, but almost so,” upbeat, and hard working. After her parents died (of the flu, IIRC), she realized she didn’t have the money to complete her physio course and was happy to get employment at the monstrous old St. Alwyn’s Hospital in London. Now she lives on the fourth floor of a (frankly grotty sounding) bed-sitter in an unfashionable area of London. While buzzing through the hospital (spreading cheer as she goes) collecting diet sheets for the (let’s be honest) harridan dietician for whom she is working, she comes across Dr. Bentinck who takes offense at the harridan changing his orders. Theodosia watches in astonishment as he politely but firmly puts harridan in her place about this. Gosh – no one else manages that!

Meanwhile, it’s clear to us that he is smitten.

Her ginger head caught fire from a stray shaft of winter sunshine and the professor admired it silently. She was like a spring morning in the middle of winter, he reflected, and frowned at the nonsensical thought.

Soon Dr. Bentinck “just happens” to be around Theodosia a lot including at the Hospital Christmas ball where they sedately fox trot (the Powers That Be do not approve of modern dances – “there was no dignity in prancing around waving arms and flinging oneself about.”). It’s lucky for her that he also “just happens” to be traveling to and from the area where her great-aunts live in cold, antiquated rigidity and can save Theodosia the hassle of taking a bus, train, and another bus there while carrying her overnight case and the cat basket with Gustavus. While she might not yet have caught on, the twinkle in the eye of the head porter at St. Alwyn’s shows that he’s aware Bentinck is in love with our girl.

Dr. Bentinck (first name Hugo) is only ten years older than Theodosia but honestly he thinks of himself as ancient compared to her and certainly acts as if he’s much older. But he realizes that he enjoys her chatty company, likes that she thinks of others before herself, and is quick to act in an emergency (just a hit and run vs the usual Neels flat out explosion or fire). He often finds himself thinking of kissing her and when she quietly frets over a mixed breed dog in need of a home, he resigns himself with silent humor to acquiring said dog.

Of course Theodosia discovers within a short amount of time that she loves Dr. Bentinck but has no illusions about any possible romance. There is an Other Woman who fuels Theodosia’s belief that this could never happen but we all know that despite the fact that the woman is slim, elegant and wears a darling hat that must have cost the earth, she will not be an impediment. Everything will Work Out. Hugo puts some serious mileage on the Bentley, running Theodosia around the countryside and making one last trip to see the great-aunts to check on something before finally (!) making his move. I adore the scene of Theodosia bravely making the best of an unexpected situation and thinking of a present for Gustavus (well, bless him he puts up with a lot and is a wonderful purring hot water bottle) but we all know she’ll be happy with this man who loves and adores her and wants nothing but to pamper and spoil her. B+