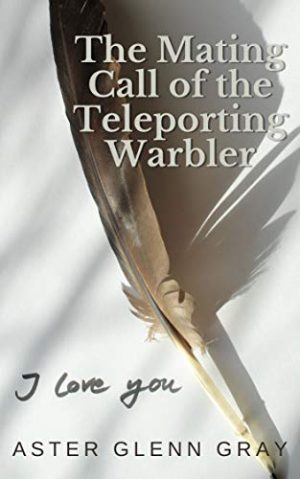 An f/f epistolary short story. When Rosemary’s research on the elusive teleporting warbler takes her out of cell service, established middle-aged couple Eleanor and Rosemary keep in touch by sending letters via their winged pet cat Ursula.

My blogging partners have been reading and reviewing your books for years but up until now, I haven’t. Well, that is going to change. “The Mating Call of the Teleporting Warbler” is a delight. It’s also just what I needed today to lift my spirits a little.

This is a short “slice of life” story, and plunks the reader down in the midst of an exchange of letters between a middle aged couple. Rosemary is a scientist studying teleporting warblers in their natural habitat which is up in the mountains and out of cell phone range. As she’s out in the field, I would guess that mail delivery by the usual route might be problematic as well. Not to fear as she and Eleanor can use their flying cat Ursula though Ursula does demand her due of flattery and petting before handing over any correspondence and she has to rest (sometimes on top of the china cabinet) after a journey.

There is also mention of wild unicorns and (possibly but they’re not totally convinced) dragons as well. The latter might just have been made up by one of their neighbors who likes to tell stories but she’s such a sweetheart that the women would hate to call her on this.

Over the course of the letters, we get a glimpse of the loving relationship between the two women which includes a past time they were separated due to Eleanor working on her dissertation. Rosemary keeps Eleanor abreast on her observations of a mating pair of teleporting warblers, the female having very definite likes and dislikes in the type of insects she’ll accept from the male during their courtship (she’ll whack him over the head with it if he gives her the kind she doesn’t like), and some exciting theories she has about them which she’ll share at a conference. Eleanor shares bits of the papers she gets from her students and the discussions they have on hackneyed opening lines.

“Since the dawn of time…” – “Really? This has been true since phytoplankton ruled the earth?”

Through it all, runs the thread of the obvious affection and love they share which, to me, is all the more powerful because of how restrained they sometimes are about it.

I will always remember the way that I felt when I saw you in the airport. It had been such a long day, and I was sure that I would need to get a taxi home because it was one a.m. and of course you weren’t going to pick me up at such an unreasonable hour… And there you were. This was back when they allowed people on the concourse, so you were waiting right at the gate when I got off the plane. I saw you, and in that moment I knew I had come home.

I feel like I want to go back and read this one all over again. A