Your novel, Milkman, recently won the Man Booker Prize. That and a rave review from Sunita convinced me to read it. 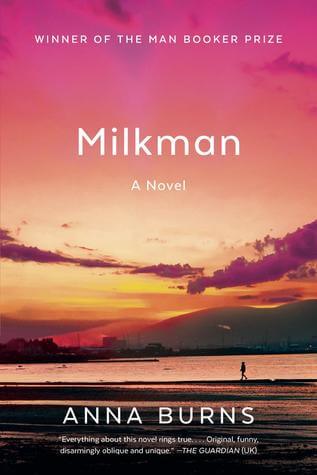 Milkman has been called “experimental fiction” because it’s written in stream-of-consciousness narration conveyed through long sentences and paragraphs, because the narrative goes on long tangents, and because the characters and places go unnamed. Some readers have struggled with this and reviews are polarized; however, I thought it was not only readable but entertaining.

The story takes place in an unnamed city but enough markers are given that a reader can place it as Belfast in the 1970s, during the Troubles. Since the characters are unnamed, the narrator / central character is referred to as “middle sister” by her sisters, “maybe girlfriend” by her unofficial boyfriend and “daughter” by her mother. The two sides of the political conflict are referred to as “renouncers of the state” and “defenders of the state.” England is “the country over the water,” and Ireland “the country over the border.”

The first-person narrator is an eighteen-year-old girl. She likes to read classic eighteenth or nineteenth-century novels, partly because she enjoys them but also to avoid engaging with the dicey local politics whose consequences can be (and often are) deadly. The escape that reading provides is important enough to her that she often reads while she walks.

The novel begins by immediately telling us what it is about:

The day Somebody McSomebody put a gun to my breast and called me a cat and threatened to shoot me was the same day the milkman died. He had been shot by one of the state hit squads and I did not care about the shooting of this man. Others did care though, and some were those who, in the parlance, ‘knew me to see but not to speak to’ and I was being talked about because there was a rumour started by them, or more likely by first brother-in-law, that I had been having an affair with this milkman and that I was eighteen and he was forty-one. I knew his age, not because he got shot and it was given by the media, but because there had been talk before this, for months before the shooting, by these people of the rumour, that forty-one and eighteen was disgusting, that twenty-three years’ difference was disgusting, that he was married and not to be fooled by me for there were plenty of quiet, unnoticeable people who took a bit of watching. It had been my fault too, it seemed, this affair with the milkman. But I had not been having an affair with the milkman. I did not like the milkman and had been frightened and confused by his pursuing and attempting an affair with me.

Like the narrator, her family and her community, the milkman is on the renouncer side of the conflict, but unlike them, he is involved in the violent aspects of it (He is also not a real milkman; the narrator doesn’t know why he is called that).

One day, while she is reading and walking, the milkman approaches her and offers her a ride in his van. This sets off her alarm bells and she refuses, but the next time she goes running, the milkman appears and runs alongside her.

The narrator doesn’t tell anyone about it because the milkman hasn’t laid a finger on her, and in her time and her place, where violence is everywhere, violence counts, but anything short of it doesn’t. Instead she starts running with “third brother-in-law,” the husband of her third-eldest sister. But that doesn’t hold off the milkman for long. Eventually, he even hints that the narrator’s “maybe boyfriend,” a mechanic, could encounter a car bomb if the narrator doesn’t break up with him.

While the milkman herds the narrator into his sphere and isolates her, her community unwittingly aids his efforts by gossiping about them as though they are already a couple. Even the narrator’s mother refuses to disbelieve the rumors, and the narrator is mad enough about the gossip and about other people’s nosiness that she rarely attempts to refute them. The fact that the milkman is a kind of hero-figure due to his renouncer-of-the-state activities does not help matters.

While this is the novel’s central plot thread, there is much more to the book than just that. In the background we learn about the families in the narrator’s community, almost all of whom have lost at least one member due to the political violence. There’s a great deal of focus on the women of the community, who find ways to resist tyranny.

The book also captures how politicized life is for this community, how choices big and small, from what to name their children to what tea to consume, reflect on people’s politics, and how impossible it is to go to the police for justice or the hospital for medical care, lest a person be turned into an informer—or if not, be viewed as one. Either consequence can be fatal.

If most of this makes Milkman sound bleak or oppressive, in my reading experience it was neither of those things. Instead it was clever, insightful, disturbing, and much to my delight, funny.

From looking at some reviews on Goodreads, I see that the humor – sly, subtle and satirical — seems to have flown over some readers’ heads, but I laughed a lot and was sometimes in stitches.

As examples, here are a couple of funny bits I will spoiler mark because they come later in the book.

Here, the narrator’s mother questions her as to whether she’s pregnant:

‘In the name of God!’ she cried. ‘Are they correct? Is everybody correct? Have you been fecundated by him, by that renouncer, that “top of wanted list” clever man, the false milkman?’ ‘What?’ I said, for it had been singular, that word she’d used and genuinely for a moment I had not a clue what she meant by it. ‘Imbued by him?’ she elaborated. ‘Engendered in. Breeded in. Fertilised, vexed, embarrassed, sprinkled, caused to feel regret, wished not to have happened –dear God, child, do I have to spell it out?’ Well, why didn’t she spell it out? Why couldn’t she just say pregnant?

And here, after she has been poisoned, the narrator’s little sisters describe a phone conversation they overheard, between her mother and her third brother-in-law:

He had heard about the poisoning but wanted to know from my mother, who had answered, why I was not going running. He said I’d missed our run a day earlier, that I’d missed other runs, that I hadn’t called round to discuss this or to get into any altercation with him over it. Then he added there’d been such a falling-down in standards that he was bewildered by what was happening to women these days. Ma said, ‘Son-in-law, she’s not going running. She’s in bed, poisoned,’ with brother-in-law saying he understood about the poisoning, ‘But is she coming running?’ Ma said, ‘No. In bed. Poisoned.’ ‘Yeah, but is she coming running?’ ‘No—’ ‘Yeah, but—’ Wee sisters said ma’s eyes went into Heaven at this point. She tried again. ‘Son, we can’t be doing this all day. She’s in bed. Not going running. Poisoned. Not running. In bed, poisoned,’ with third brother-in-law –exercise fixation overriding thinking mechanism –about to ask if I was going running but this time ma pre-empted with, ‘God love you and everything, son-in-law, but is there something wrong with you? You know yourself she’s been poisoned, the whole district knows, yet here I am, spending twenty hours relaying to you that her stomach’s been expunged or whatever that word is, with me having to sit up two nights with her in case the expunging hadn’t taken, yet you’re not assimilating but instead are behaving as if I haven’t explained at all.’ With just the slightest falter, brother-in-law said, ‘Are you saying she’s not coming running?’

Literary novels are not often judged on the basis of whether the main characters are relatable, but I found the narrator easy to relate to. There is, of course, the #metoo aspect of her story—how many of us have not been sexually harassed? —but there is also her love of reading and her stubborn insistence on being allowed her privacy and her escape into books.

The narrator’s community, even with all its flaws and quirks, was made equally understandable – the book captures how with violence as a constant, people develop mechanisms for survival, such as tolerating all but the most dangerous dysfunctions and relying on kangaroo courts and make-do medical treatments as well as on the gossipy grapevine.

While the story takes place in 1970s Belfast, it feels like something that could come to be anywhere. The absence of names adds to that feeling, as well as to the sense of the dystopian and surreal. And that is perfect, because even in the real world, war can feel that way–surreal and dystopian.

I have seen Milkman compared to Kafka and Orwell, and even to The Handmaid’s Tale (a much more chilling book IMO). My husband was reminded of my favorite George Saunders short story, “Sea Oak.” As for me, the closest comparison I can come up with is Meg Rosoff’s young adult novel, How I Live Now. But this is really its own book, written in an original and witty voice.

As the novel progresses, the sense of the absurd deepens. The reader experiences the absurdity of the grapevine’s misconceptions, of the politicized culture, of men’s views of women and women’s views of men, of men’s treatment of other men and women’s treatment of other women, of trying to discuss any other political or social issue, of trying to conduct a normal life or childhood in the midst of a violent sectarian conflict.

All these come together to create an indelible picture not only of the world the narrator inhabits, but also of humankind. There are disturbing moments and funny moments, violent moments and tender moments. Life, love, death, hate, tragedy and comedy. In short, the things that make people people and life on earth worth observing. A.