JOINT REVIEW: Not Dead Yet by Jenn Burke 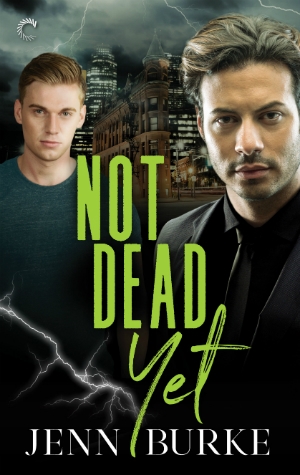 Dying isn’t what it used to be.

Wes Cooper was dead. Then he wasn’t—though he’s not exactly alive, either. As an immortal not-ghost, he can transition between this world and the otherplane, which makes him the perfect thief for hire. For seventy years he’s made a “living” returning items to their rightful owners, seeing his fair share of the bizarre in the process. But he’s never witnessed murder. Until now.

His latest mission brings him more than he bargained for: a very-dead actor who is definitely going to stay that way. It’s just Wes’s luck that his ex-boyfriend, Detective Hudson Rojas, is assigned to the case. Hudson broke Wes’s heart years ago—and could again, given he’s rocking a hot silver-fox look that shouldn’t be legal.

As they work together to track down the murderer before anyone else gets hurt, it becomes clear Wes and Hudson have unfinished business. And when a secret Hudson’s been keeping threatens more than just their happiness, it might mean the end of their not-life together—permanently.

Kaetrin: When I first read the blurb I thought Hudson must be about 95 years old. As I said on Twitter, #StillHereForIt, but as it happens, Wes is less dead than I thought he was and he dated Hudson after he became…whatever he is (Wes is unique). I quickly found out that Hudson is 58. A very fit, hot silver fox 58.

The blurb fascinated me with it’s unusual premise and I enjoy an older hero (I am married to a silver fox myself so I understand the attraction) – so I was excited to read Not Dead Yet. I’m pleased to say that the book lived up to its promise and I’m so looking forward to Wes and Hudson’s next adventures. Because colour me happy, there are three books planned for this pair – although I hasten to add that this novel ends on a firm HFN note so romance lovers will not be disappointed.

For all that I didn’t mind if Hudson turned out to be in his nineties (hey nonogenarians need love too right?) I was glad that very early in the book and entirely without info-dumps, you explained the situation.

Eighty-five years ago, Lexi’s great-grandmother, April, attempted a spell to resurrect me after my murder. It was supposed to give me back my body and my life as it had been when I died—and it mostly worked. I wasn’t dead any longer—but I wasn’t a normal human, either.

Sirius: The premise fascinated me as well, because off the top of my head I cannot remember reading about somebody with the same abilities as Wes (ghost but not really). It lived up to my expectations too, although I also initially misread the age of the character, only I thought that Wesley was 85 instead of 113.

Kaetrin: Wes lives in the normal world most of the time but he can shift to the “otherplane” where he is non-corporeal and can do things like walk through walls. He has a few other “superpowers” too; he can, if he knows someone well enough, do a kind-of teleport in the otherplane and he can do poltergeist-y things like make light bulbs explode to get people’s attention. For the most part, he uses his ability to go non-corporeal to retrieve things which have been taken – effectively, he steals things back for people who’ve had things taken from them. Wes is an ethical thief and with his unique ability he has cornered this niche market. Over the years he’s done well for himself.

Wes’s best friend is Lexi Aster, a Black lesbian witch who is the great-granddaughter of April, the witch who “resurrected” him after he died. It’s clear, without being explicit in the book that Wes has had a pretty lonely and isolated life since he “died”. He can’t get too close to people because it becomes obvious pretty quickly that he doesn’t age. The ones he’s been closest too are the Asters but he’s seen three generations of them come and go so it must be bittersweet at the least. However, Lexi is young and healthy so there’s no reason to think they won’t be platonic soul mates for a good long time yet.

Sirius: I loved this book.

As the blurb tells you at the beginning of the book during one of Wesley’s work assignments he witnesses a murder and fails to stop it. He blames himself (no, I didn’t think that he would have been able to stop it for many reasons – mostly because of the very short time during which it happened and the abilities of the murderer) and in addition to calling the police to report the murder he decides to locate and reconnect with his former boyfriend, a police detective Hudson Rojas.

Hudson and Wesley were deeply in love but also had a lot of issues they could not resolve while they were dating, so they parted the ways 33 years ago. Hudson is now 58 years old and his interactions with Wesley when they reconnect and have to investigate the murder run hot and cold.

Kaetrin: Wes is demisexual; he doesn’t experience sexual attraction without a strong emotional connection and he has experienced such emotional connection only twice in his life; with Michael Aster, the man responsible for his death and with Hudson Rojas. Even though it’s been 33 years since they split up, when Wes sees Hudson again, those long-buried feelings come back in a rush.

By anyone’s measurement of time, thirty-three years should have been long enough to get over Hudson and his damned smile, but now that I was thinking about him, I could feel my soul bleeding. A trickle, just enough to know that things weren’t as healed as I thought they were.

Hudson enlists Wes’s aid in solving the murder and as the body count rises, it becomes clear there is a paranormal connection and the risk to them increases exponentially. I don’t want to say too much about the story from there; there’s information about Hudson which would be spoilery and I think it’s best discovered as one reads the book. I liked the different take on various paranormal creatures and the way the author wove them into her world.

Sirius: I was a little surprised at Wesley being surprised, because if nothing else did he really expect that after 33 years passed between them, nothing would change?

Having said that, I thought the author explained Hudson’s motivations and behavior perfectly. Him loving Wesley still but wanting to keep him at arm’s length made sense to me but I was glad when the change in his behavior took place. It is amazing really, usually I roll my eyes when the guys reconnect after fifteen twenty years and they never really had any other serious relationship, but in the context of this story for these two men it made sense. They had sexual encounters, but neither Hudson nor Wesley seemed to love anybody else romantically. The plot was very busy with them investigating the murder/s, so it was obvious to me at the end that they still had issues between them that they had to work out, but once again it made sense that they had to devote their time and energy to finding bad people and I thought the characters revealed a lot about themselves in amongst all the action.

Kaetrin: There is a lovely found family aspect to the book as well as the HFN between Wes and Hudson. Prior to the events of Not Dead Yet, it’s clear Wes and Hudson both led a very lonely isolated life. By the end of the book they are a group of five. As much as I loved Wes and Hudson I was also really happy to read about Lexi and Evan and Iskander.

The story is told entirely from Wes’s first person point of view but I felt like I got to know Hudson well enough through his actions and the dialogue. Wes is an entertaining character and I enjoyed the time spent in his head.

The characters make smart decisions – when they choose risk they do it knowingly and with prior consideration and I appreciated that very much.

For all the murder and death and risk to life and limb there is a section in the book which legitimately made me laugh out loud. Honestly, I think I’d like “Suck my toe, Hudson!” on a t-shirt.

Sirius: I loved Evan and enjoyed what I saw of Lexi and Isk.

Grade: B+  (and would have been higher if I had more confidence in the idea that three more books will have enough meat in them to satisfy me).

Kaetrin: I think that because the main focus of the book is the mystery that there will be a different mystery/murder each book and that will take up most of the page count. I expect that the other characters will become even more involved as well and that the found family aspect of the series will get stronger. I suspect that something spooky involving Michael is going to happen and that may throw a spanner in the works for Hudson and Wes but that’s just a guess. So I think there’s plenty to keep me engaged for three books. I’m really looking forward to what the author comes up with next for this group of people.

My grade isn’t far off yours Sirius but I’d describe it as more of a high B.

Sirius: Just to be clear I absolutely want you to be correct on this one – that there will be new mystery in each book, etc.  The reason why I am nervous is because of the Chaos Station series we reviewed together where this author was a part of the writing duo and well, as much as I enjoyed the writing and the characters, I thought those books lasted at least a couple more books than was necessary.  I am keeping my fingers crossed for these series.