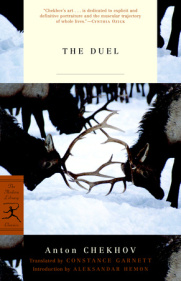 First published in 1891, this morality tale pits a scientist, a government worker, his mistress, a deacon, and a physician against one another in a verbal battle of wits and ethics that explodes into a violent contest: the duel. When Laevsky, a lazy youth who works for the government, tires of his dependent mistress, Nadyezhda Fyodorovna, Von Koren, the scientist, delivers a scathing critique of Loevsky?s egotism, forcing the young man to examine his soul. The Duel is a tale of human weakness, the possibility of forgiveness, and a man’s ultimate ability to change his ways. It is classic Chekhov, revealing the multifaceted essence of human nature.

One of the reasons why I am so reluctant to review some books written by 19th-century Russian writers is because I am afraid that my review would go something like this: Oh, this is brilliant. The end.

But then I had a conversation with Sunita about a nonfiction book by Chekhov which I for some reason have not read yet, and that made me think about this book, which is probably my favorite of his. I realized that while this is not a Romance, we could argue that the writer plays with and subverts some Romance tropes, so I figured it might be of interest to some DA readers. And the ending is actually quite happy. As happy as it can be, anyway – the couple stays together and nobody dies.

Before I go on though, I cannot stress strongly enough that in some ways the book does not belong to Romance genre at all, mostly because that no character is romanticized. They all have lots of weaknesses, which many readers of Romance do not like, but I liked all these people anyway – they felt like real people to me.

The action takes place in the Caucasus (I just realized that I actually cannot figure out the specific place). Is it Crimea? Turkey? (because they are at the Black sea and one tiny character is a Turk). I am not sure and I really do not think it matters. It is one of the places which the Russian empire made theirs, and our characters live here. We meet Ivan Andreevitch Laevsky “a thin, fair, young man of twenty – eight, wearing the cap of a clerk in the Ministry of Finance” when he comes down to bathe on the beach and has a conversation with his friend Samoylenko, the army doctor. The gist of their conversation is that Ivan Andreevitch is tired of his mistress (because they are not married, you see, and she used to be married to somebody else) Nadyezhda Fyodorvna and wants to figure out what to do with her. Samoylenko (nice guy, who always helps everybody in town and whose only weaknesses seem to be his vanity and being ashamed of his kindness) at first suggests giving her money, then tells Ivan that he would never tell the woman he has fallen out of love with her and would live with her till the end. But Ivan goes on and on. He talks about civilization, about how tired he is, how upper-class Russians are degenerating.

His conversations seem to be very familiar to me, because 19th-century Russian literature is full of characters like Ivan – they have wonderful ideas but cannot find their place in society. At some point a character named Von Koren even brings up the names of Onegin and Pechorin, saying that they started all that (those are famous characters from works by Alexander Pushkin and Michail Lermontov). But where Onegin and Pechorin show such promise and one can truly pity them (at least I did), Laevsky I thought initially was portrayed with much less sympathy. Maybe it is because no matter how much he talks about society, his main concern is how to detach himself from the woman he is living with. I remember thinking when I read this book for the first time – what an ass.

We also learn from the conversation these friends are having that Laevsky got a letter that tells him that Nadyezhda’s husband is dead, but he does not want to show her the letter because that would mean they can get married now and he does not want to.

And his way to be tired of her is to be extra nice to her, call her “darling”, till he figures out how to run away back to St. Petesburg.

“As for love, I ought to tell you that living with a woman who has read Spenser and has followed you to the ends of the earth is no more interesting than living with any Anfissa or Aculina”.

Eventually though, I felt bad for him – why I have no idea, but I decided it is Checkov’s writing talent. He made me pity this guy, who must have had some dreams and inspirations and probably loved his girlfriend two years ago when they ran away and ended up here. Honestly, till the end I was not sure what I liked in him, but I liked him and the end of his character arc satisfied me.

While Dr. Samoylenko likes everybody and wants to help everybody, the character who thinks that people like Laevsky need to die is zoologist Von Koren. He came to Black Sea to study medusa and dines with Dr. Samoylenko on a regular basis. Von Koren certainly does not hold back in his opinion of Laevsky and his evaluation is mostly correct.

“What has he been doing these two years that he had been living here? We will reckon his doings on our fingers. First, he has taught the inhabitants of the town to play vint: two years ago that game was unknown here; now they all play it from morning till late at night, even the women and the boys. Secondly, he has taught the residents to drink beer, which was not known here either; the inhabitants are indebted to him for the knowledge of various sorts of spirits, so that now they can distinguish Kospelov’s vodka from Smirnov’s No. 21, blindfolded. Thirdly, in former days, people here made love to other men’s wives in secret, from the same motives as thieves steal in secret and not openly; adultery was considered something they were ashamed to make a public display of. Laevsky has come as a pioneer in that line; he lives with another man’s wife openly… Fourthly…” (21)

“From the first he struck me by his exceptional falsity, which simply made me sick. As a friend I pitched into him, asking him why he drank too much, why he lived beyond his means and got into his debt, why he had so little culture and so little knowledge; and in answer to all my questions he used to smile bitterly, sigh and say: “I am a failure, a superfluous man”; or: “What do you expect, my dear fellow, from us, the debris of the serf-owning class?” or: “We are degenerate…”

According to Von Koren, human beings are better off without people like Laevsky – not fit enough to move civilization forward I guess.

The plot really is very simple. Playing with the romantic subplot that I mentioned before includes cheating and the way it was handled (not a cause for melodrama if that makes sense), and the duel which is mentioned in the blurb is not caused by cheating. It does become a warning bell for Laevsky and a catalyzing event which causes him to finally change his life. Hopefully he can stick with it, but once again there was no melodrama. Chekhov gives a lot of depth to his characters and there are a lot of interesting ethical and philosophical discussions. None of his characters are completely horrible or perfect, and as I said before, I liked them all.

→ Sirius
Previous article: REVIEW: Mistress Firebrand by Donna Thorland
Next Post: An Ember in the Ashes: The Book Trailer and an Author Interview