REVIEW: My Best Everything by Sarah Tomp 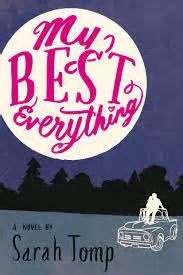 An Appalachian summer walks the line between toxic and intoxicating in this debut novel about first loves, broken hearts, and moonshine.

Luisa “Lulu” Mendez has just finished her final year of high school in a small Virginia town, determined to move on and leave her job at the local junkyard behind. So when her father loses her college tuition money, Lulu needs a new ticket out.

Desperate for funds, she cooks up the (illegal) plan to make and sell moonshine with her friends. Quickly realizing they’re out of their depth, they turn to Mason, a local boy who’s always seemed like a dead end. As Mason guides Lulu through the secret world of moonshine, it looks like her plan might actually work. But can she leave town before she loses everything?
My Best Everything is Lulu’s letter to Mason–but it a love letter, an apology, or a good-bye?

When Netgalley sent out an email about this book, it caught my interest despite the fact that I generally don’t read YA or NA. Why? Because of the moonshine angle. I’m a Southerner born and bred and have known people who made shine. Hell my own grandfather made some back in the day even if he didn’t run any, though I was far too young for a taste. I knew when I saw the heroine’s plans I had to at least try it.

As I said before, I don’t read YA very often but I can grasp tropes and these are probably common ones. First alcoholic drink, soon leaving for college, parental issues, a high school student death, the choices of those planning to stay in a small town v those who can’t wait to leave, early marriage, good brainiac girl + drop out bad boy, recovering alcoholic, first love, finding yourself, changing from person of high school to college. They’re all there but these are all dealt with fairly realistically and felt organic rather than forced.

The book is written as a “letter” from Lulu to Mason and serves to keep his POV hidden from us as well as Lulu. Lulu has known or known of these characters all her life so her insight into how they’ll respond and think is fairly clear. Yet as the book progresses and events spiral out of control, of course people will change as well as changing due to growing up and having new options in life. Some “givens” turn out differently than Lulu could have imagined but everyone makes it through.

Lulu is naïve which is not a good thing if one decides to make up her lost college tuition by making and selling moonshine. Along with equally clueless if slightly less naïve best friend Roni and her boyfriend Bucky, she would have been lost without Mason to lead the way into lawlessness. I’m not sure if the directions on what to do to cook up a batch are correct but Mason’s warnings on what can go wrong, his fear of other shiners finding out what they’re doing and the fate of his older, family friend serve as warnings to Not Try This At Home.

YA is all about this momentous time of change in life, new beginnings and hopes, finding one’s self, saying goodbye to childhood as you look towards the future and Lulu is experiencing all this along with her same age friends. From early on, she contrasts her plans with those of her friend Roni who has no desire to leave their small town and who worries about her boyfriend who is going to college. But it’s not until later on that Lulu grasps that not everyone has these choices. Mason is stuck there and facing the prejudices people have against him for the choices and things in his past. And of course we all know from countless romance novels about how in small towns, no one ever forgets anything.

Lulu is young, determined and thinks she knows what she wants and where she’s going. I do admire her strength of will and her plans but she is also – par for the course and her age – very wrapped up in herself and her dreams while not sparing much thought for others. She’s book smart but not street smart.

Mason is the perfect boyfriend. He’s not perfect himself with his past run-ins with the law, bootlegging, alcoholism and drug use but he’s almost too good to be true as a boyfriend. He supports Lulu, goes far above and beyond the degree of involvement he said he’d limit himself to, risks the law, risks stirring up resentment from his family but most of all risks his hard won sobriety to help Lulu earn the money which will take her the length of the country away from him. Oh, and he won’t devirginize her because she’s needy, desperate and not thinking straight when they finally end up in bed. He’s St Boyfriend.

The conflicts in their relationship – the disparity in how the town sees them and Lulu’s plans to leave and the alcoholism – are standard yet handled well. When a misunderstanding rears its head in a YA is it a Bid Mis or just teenage confusion? Well whatever, Lulu jumps to conclusions at the end and makes some relationship and moonshine mistakes.

Here is where the book gets slightly out of control with something happening which I would think would bring the law down on what had been going on. Yet nothing is mentioned about anyone paying any price for what Lulu and Co did over their summer vacation. Then also just as suddenly, the impediments holding her in town are easily dealt with as well. I felt like there was a build up in tension for which no consequences are paid. I didn’t get a payoff I was looking for.

I enjoyed watching Lulu and her friends grow up during their last YA summer in town. Lulu shows gumption in finding a way to keep her dreams of college alive. Her tiny hometown isn’t vilified but neither is it a place where she can realize her hopes for the future. It appears that she and Mason could have something that will continue past this summer but I wish that their relationship hadn’t seemed quite so “things flow in one direction.” B-