REVIEW: Bride of the Rat God by Barbara Hambly

The title of this book is what got my attention. I mean, how could it not? Once I saw it, I knew I had to read it. Who’s the Rat God? Who is his bride? What on earth is going on here? 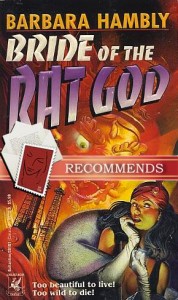 If not for her actress sister-in-law Chrysandra Flamande taking her in, WWI widowed Norah Blackstone would still be an underpaid, overworked servant to a nasty, older woman in gray Manchester, England. Sometimes Norah still can’t believe how Christine blew into her life and whisked her away to sunny California as a companion to Christine as well as her three Pekinese dogs – Buttercreme, Chang Ming and Black Jasmine.

Though she can’t act to save her life, Christine is in the movie business and the pampered mistress of studio head A.F. Brown who’s given his “mad about all things Chinese” rising star a beautiful, though unusual, necklace reputed to have been looted from the Imperial Palace. On the night of the premiere of her latest movie two things happen – Norah meets camera man Alec Mindelbaum and an older Chinese man desperately tries to warn Christine of a life or death evil that’s been raised by her wearing the necklace. Already used to the lengths that movie fans will go to in order to see their favorites, Norah dismisses the odd old man though she and Alec agree he wasn’t like the usual fans.

But later that same night two more things happen – a stunt double who wore the necklace is brutally murdered and a violent storm blows through the area during which the three Pekes go berserk. The next morning the Chinese man, Shang Ko, appears and almost mystically manages to be hired as Christine’s groundskeeper. Still, no one is willing to believe what he says about the necklace and how it means Christine is now promised to an ancient, evil Manchurian god. But when bizarre things begin to happen on a location shoot followed by a mind blowing event after a star studded party, Christine, Norah and Alec can’t deny that something evil is lurking and maybe the old man is right. Can the four of them thwart the Rat God of his promised bride and keep from destroying half of Los Angeles while they do it?

After I read the glowing review of this book at All About Romance, I immediately ordered a used copy online that then sat on some bookshelves near my computer desk for years, silently urging me to read it. Finally I took it down and slid it into my reading rotation. Now that I finally read it, I wish I’d done so years ago. It’s fascinating, well written, fast paced and packed with tension leading to a dynamite ending. It’s also got a sweet romance between a woman who thought her heart was dead and a fantastic hero who’s probably a good four inches shorter than she is, bearded and who wears glasses. Readers who want to experience an unusual hero need look no further.

A friend of mine has Pekes and the descriptions of Christine’s three furry protectors are so accurate that they come alive for me as individual little people from Buttercreme’s outraged hiding when people visit the house, to Chang’s conviction that everyone is a long lost relative and finally little Jasmine struggling up and down stairs while being extremely vocal about that. They are also fiercely protective of both their mistress and Norah and play important roles in the ultimate take down of the Rat God.

The world of 1920s Hollywood with all its pre Hays Code wildness is vividly brought to life. The film stars of the day might have earned more money than the average American would see in a lifetime but the physical and mental cost of the 18 hour work days and churning out a film a month would need the easily prescribed cocaine to keep them going. And who cared for Prohibition? Free flowing booze, some of it even safely made!, was the order of the day. Sleek Nash roadsters, beaded flapper dresses and elegant cigarette holders add to the visual images that filled my head while reading the book.

As for the fantasy elements of the story, I guess if a reader is willing to buy a book called “Bride of the Rat God,” then he or she will be willing to go along with the plot. Clues are woven into the story from the beginning but one thing I like is how you gently drop them into the narrative without pointing neon arrows at them. Yeah the premise, when examined as a whole, is outrageous but since it’s doled out little by little, I had time to swallow the tiny pieces and buy into the whole shebang. The time frame of the story is also crucial since it draws on actual things which were common then such as powerful studio heads manipulating crime scenes to protect their investments, the simultaneous mania for China with the blatant racism against the Chinese in L.A., the specific locations in and around the city which feature in the book plus the “free for all” film industry of the day.

As well the danger is slowly revealed such as when Norah notices something about the foundation of Christine’s house after the early storm that scares her yet it’s another page or two before what alarms her is finally described. It allows time for my brain to magnify the mystery and terror of what could possibly be there and the implications that arise. Later on all the clues and forshadowing make sense but the whole thing is allowed to build to the thrilling climax.

The wealth of period detail, the pulse pounding ending, the complex characters, the tight narrative and three wonderful little dogs make “Bride of the Rat God” a winner for me. I am glad it’s now available digitally but wish the ebook version available had the original cover. For people tired of vampires, were-creatures, Regencies, gazillionaire CEOs and secretly pregnant heroines this is something different to sit down and fall in love with. A