I wanted to read this book because of the Tudor time period and the fact that the hero is not only a commoner but a bastard as well. Also, I had heard good things about your Harlequin Historicals of the 90s. It’s slightly bawdy for the time with Dicken doing his share of bodice diving amongst the wenches of the inns and manor houses of England and the heroine takes to public performances like a duck to water but methinks this is a book I would have enjoyed more “back in the day.” 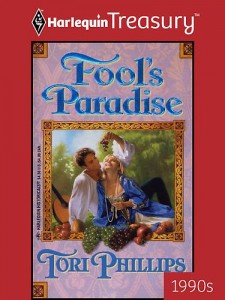 It starts off well enough with Lady Elizabeth fleeing from her piggy wanabe husband after her father dies in mysterious circumstances. She and Tarleton meet and greet and she tells him her tale after which he agrees, for a fee, to escort her to her godmother, the Queen. So far so good. He devises a “Chick in pants” disguise, treats her like an apprentice of the day would be (ie badly) but then clucks and hovers over her at all other times. Even after someone penetrates Elizabeth’s disguise and tells Tarleton it was his mooning over her that gave away the game.

There are lots of details – the good, bad and ugly about life in Tudor England and life on the road for the po’ folks. Elizabeth gets an eye opening view of life among the rushes and ale houses and at the country fairs. This well done local color is what truly kept me going. That and the image of Elizabeth trying, and failing, to ride a goat.

But the story also circled endlessly while all these events were taking place. Tarleton is soon smitten with Elizabeth but knows that a titled lady with property is as high above his head as the moon. To keep his mind off her and her luscious body and how badly he wants to tumble her, he first jests with her then – when she in all innocence jests back and he gets hard enough to hammer nails – he treats her coolly. And she gets wounded and miffed until the next day when it all cycles. And/or something will happen to frighten Elizabeth and she’ll dissolve into tears and sobs and Tarleton will enfold her in his manly arms and rock her like a baby. Which is definitely not how a master and apprentice would behave. I got so damn tire of Elizabeth boo-hooing over and over I wanted to shake her and snap, “get over it.”

The way the villain is caught and Tarleton finally gets his dream girl is cool and apropos to the times. Points for working the Babbington Plot into the works and initially circumventing the vast difference in status between Elizabeth and Tarleton. But, alas, just when I thought I was home free with a commoner hero, the Queen comes along and changes all that. Sigh. Oh, well, that part was good while it lasted.

I enjoyed parts of this book, am glad I have now read one of your books, liked the detail and the way all was taken care of in the end but the endless loop of Elizabeth’s tears and Tarleton’s, “there, there now, chuck” wore me out. As I said, if I’d read this when it was first published back in the 90s, I’m sure it would have made a better impression on me. But now, it’s a C.