While I really liked your debut YA fantasy, Graceling, I was less keen on your second novel, Fire. Graceling had a strong heroine, Lady Katsa, who, along with the man she grew to love, sought to rescue a child princess from an evil king, guarding her independence the whole way, but Lady Fire, the heroine of Fire, was less engaging. 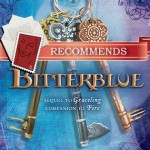 Fire had a background and circumstances that should have made her more compelling than Katsa, but she was goalless and confused about what she wanted or ought to do for much of her story, and that was one of the things that made your second novel feel slow and episodic rather than well paced and cohesive.

For these reasons, I wasn’t sure I would enjoy Bitterblue, your third novel in this same series. Bitterblue’s main character is the girl Katsa rescued in Graceling. Now eighteen years old, Queen Bitterblue reigns over Monsea from her castle in Bitterblue City, but the reality is that in most ways, Bitterblue is a figurehead.

Bitterblue’s four advisors, Thiel, Runnemood, Darby and Rood, men who once advised her father, have been running Bitterblue City and the kingdom of Monsea for their charge ever since Bitterblue ascended the throne at age ten. Though busy reviewing and signing a constant stream of paperwork and only occasionally free to do something interesting like observe a trial, Bitterblue senses that all is not well in her domain.

One night, after a day of frustration, Bitterblue sneaks out into her city garbed in a servant’s clothing. She ends up in a tavern beneath one of the bridges, a story room where people get up to tell stories. The stories are true, they are tales about Bitterblue’s father, King Leck, an evil graceling who used his mental powers to manipulate and deceive his people. They are tales about Lady Katsa, who killed King Leck and brought his frightening reign to an end. And they are tales that repeat strange stories Leck himself told.

Bitterblue finds herself drawn to the story room, and she sneaks out night after night. It is at the story room that Bitterblue meets Teddy and Saf. Teddy, it turns out, is a printer and publisher, while Saf is a thief. But Saf is no ordinary thief, for one night on her way home Bitterblue observes him stealing a gargoyle from her own castle. She is puzzled as to who would want such a thing, and why.

When Teddy is attacked and nearly killed, Bitterblue brings the castle’s healer to his aid. Saf is both grateful and angry – the people of the castle are no friends to Teddy and his truth-seeking cause. Bitterblue feels attracted to Saf, and she has been thinking of him and of Teddy as her friends. But are they her friends, or her enemies? And if someone is attacking them and others of the city’s “truthseekers” who is that person, and what is the motive behind these attacks?

Meanwhile, Bitterblue’s graceling cousin Po and his lover Katsa arrive at the castle, along with some of their council allies. Bitterblue has missed Katsa and Po horribly and she hopes they can help her get to the truth. But Po is trapped in his own web of lies, since he cannot reveal the truth of his grace to the world without endangering himself. Po’s conflict between truth and lies makes Bitterblue aware that she too has deceived her new friends as to who and what she is.

How is Bitterblue to heal her kingdom from the damage done to her people by her father and his lies? Does the answer lie in respecting the tormented survivors’ need to let the past be, or in exhuming Leck’s crimes and the resultant trauma? Can Bitterblue become a truth-seeker herself, or does her role of queen proscribe her from hearing and learning the truth? Does she, Leck’s own daughter, truly want to know it?

These are the questions at the heart of Bitterblue, and I loved that it made me think about so many issues relating to lies and truth, and also, about the role of stories and storytelling in healing. Bitterblue is a complex, intricately plotted and magnificent book. While I liked Graceling very much and was disappointed in Fire, I feel that ultimately Bitterblue is not only more ambitious than those books, but also better executed than either of them.

One of the reasons why is that Bitterblue is more structurally and thematically cohesive: it begins with Bitterblue’s goal to learn how to heal her kingdom and ends with that healing process underway. At its center also lies the mystery of who is suppressing the truth and why, and as in a good mystery, clues slowly accumulate until the question is finally answered.

Another of the reasons why is the central character: Bitterblue may be determined to become a better queen and to heal her kingdom, but she is not without flaws like impatience and imperiousness, and weaknesses like moments when she feels defeated or uncertain as to what the right path is. Yet her determination to learn and do better won’t quit, and that is a big piece of what makes her heroic.

Bitterblue is also coming of age tale – not just about gains, but also about losses. Growing up isn’t always easy for Bitterblue, not because she lacks maturity, but because the truths she has to uncover in order to figure out what needs to be done for her kingdom are painful.

Along the way she is aided by memorable side characters – some familiar faces from Graceling among them, and some new ones as well. The dead Leck emerges as a more complete person here – if in Graceling he was simply evil, and in Fire he was a boy already capable of evil, here we not only see much of the damage he did, but also learn some of his reasons for wreaking it.

Then there are those secondary characters who thwart Bitterblue in the here and now, also memorable and distinct, though I will refrain from naming them because the knowledge of who is Bitterblue’s friend and who is her foe is deliberately concealed from the reader for much of the book.

Bitteblue is therefore also a fantasy about gaining political agency in the midst of court intrigue. I read this book with my husband and at one point he paid it the compliment of comparing it to Megan Whalen Turner’s The King of Attolia, another intricately plotted novel in which hidden truths and concealed deceptions are wound together and intrigue and assassination attempts abound. I must love this kind of story because I loved this aspect of both books.

Beyond all that, though, Bitterblue is a story about the thorny issue of national trauma. As I read, I found myself thinking about South Africa’s Truth and Reconciliation Commission, and about my late grandmother’s refusal to discuss her Holocaust experiences. Truth and storytelling have an important role to play in healing nations, but for individuals, sometimes keeping silent is preferable to examining their past suffering.

I loved that Bitterblue did not refute either of these contradictory truths. I loved that it did not offer up platitudes or easy answers either for Monsea’s troubles or for Bitterblue’s.

As appropriate to the YA fantasy genre, Bitterblue was successful in becoming a better queen to her people. She ultimately did a better job of that than most eighteen year old girls in our own world could do, and at times it was a bit of a stretch to believe that she could handle this task as well as she did. But as appropriate to the themes of the story, accomplishing this was not a simple job, nor one that would ever be completed, and it had its costs.

Bitterblue is occasionally melancholy (though no more so than the two books that preceded it) and it is also less romantic than either Graceling or Fire. Some of those readers who read YA novels mainly for the romance may find this disappointing. I thought it was fitting and appropriate, given Bitterblue’s youth, her political position, and the national importance of the issues she had to grapple with. For me, there was just enough romance to help keep the book from getting too heavy, and not enough to overpower the other themes. A.