Sunita's Best of 2010: Dating the Millionaire Doctor, by Marion Lennox

I first encountered your novels in the Harlequin Romance line. While I usually avoid books set in made-up principalities starring royal heroes like the plague, you managed to give your characters believable backstories and motivations. And when I went on to read your Medical Romances, you quickly became one of my favorite authors in that line as well. You have the ability to combine serious issues and heart-tugging scenarios with down-to-earth characters, and the serious bits are leavened with humor and practicality. So when I read the back cover blurb on Dating the Millionaire Doctor, your most recent release in the US Harlequin Medical line, I thought that if anyone could pull of a romance set in the aftermath of the 2009 Australian bushfires, you could. 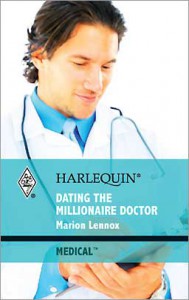 When I think of romance novels set against the backdrop of danger or disaster, I think first of historical novels which take place around events like the Battle of Waterloo, the American Revolution, or the Indian Mutiny of 1857. Many of these, like M.M. Kaye’s The Far Pavilions, are epic novels, and they draw on the idealistic and romantic aspects of sweeping social change. By contrast, your novel is set six months after the bushfires and has a much smaller scale. It takes place in a rural area devastated by the fires in which dozens of people lost their lives, and in the small town nearby. Tori Nicholls is a vet who lost her family in the fires and who has spent the six months since then caring for wildlife who were also injured. Jake Hunter is an Australian-born anesthesiologist who moved to the United States as a toddler with his mother and never saw his father again. He has come back to Australia to see how the properties he inherited from his father withstood the devastation and to decide whether to sell them and cut his ties to his native country for good.

Jake's late father's house, which was one of the few untouched structures on its ridge, was used as a veterinary hospital for the six months following the fires and Tori has been living in it while working nonstop. But now, with the huge demands of her job almost over, she is trying to come to terms with her loss and figure out what to do next with her life. She has an insurance settlement so she is financially secure, and she has healthy career prospects, but except for one of the family dogs, she has nothing left of her previous life. The early chapters of the book, where we find out what happened to Tori and her family, and what her life has been like since then, are heartbreaking and quite difficult to read.

Jake is handsome, wealthy, and mostly content in his career in a Manhattan teaching hospital, but his parents’ divorce and his mother’s unhappiness have left him cut off emotionally and unwilling to form close bonds with other people, including women. He grew up without any contact with his father and Australia and assumed this was his father’s choice. When he finds out the story was more complicated, first from people at his father’s funeral and then during this trip, it turns the way he sees the world upside down.

Jake and Tori meet cute, but not propitiously, at a speed dating event in the town. Each notes the other’s physical attractiveness, but everything else is so off that they both are relieved at the brevity of the encounter. But when they meet again at the house, they discover that their physical attraction is compounded by an emotional connection as well, and they soon they wind up in a one-night stand. Both Jake and Tori know the prospects for a relationship are almost nonexistent; Jake is determined to go back to New York and his normal life, and Tori can’t imagine living anywhere else than in or near Combadeen. Their encounter helps Tori make the decision to move off the ridge and start setting up a new life, and Jake spends as much as he can with her before he flies back. He tries frantically to think of a way he can keep Tori in his life without in any way changing how he lives, but Tori will have none of it:

"So what are you saying? You're asking me to marry you?'

"I don't know,' he said explosively. "I hadn't even thought of marriage. But the way you make me feel-You just do something to me.'

"You're saying it's my fault?'

"I'm not talking about fault.'

"I can't pretend. I never intended to-'

"Of course you didn't, and I won't be proposed to against your better judgement,' she said, suddenly angry. "To be slotted into your life in the few minutes you're home between work and sleep? In a place where there's no one I love? How can you ask that of me?'

"We could take Itsy and Rusty back with us. We could get a larger apartment.' He raked his hair and she thought, He really hasn't thought this through. He hadn't even known he was going to ask her to join him until the words were out of his mouth. Now he was trying to figure out how he could make it work. "We could make arrangements,' he said.

"I don't want to make arrangements,' she snapped. Anger had arrived now, coming to her aid in a red hot mist. He thought he was attracted to her, so he'd take her home, like a puppy from a pet shop, without even doing the groundwork. Plenty of doctors have wives. What sort of statement was that?
"I'd take up space in your life, Jake Hunter, and you don't have space to give,' she told him, knowing she was right, even if it hurt like crazy to say it. "My community is here. My work is here. My life is here. It's not sitting in some drab New York apartment waiting for you to get home at night.'

"What colour is it?'

Tori and Jake are brought back together by an unexpected pregnancy which has to be one of the best justified I’ve read. But again, when Jake assumes that Tori can just join him in New York, she refuses, brightens up his gray life a bit, and goes back home. The sequence where Tori goes to New York is really well done. She tells him face to face, he takes it well, and it seem clear that they can raise their child healthily without being together. Therefore, when they finally get together after Jake figures out what he wants, complete with a great grovelling scene which convinces both the reader and Tori, they do it because they want to, not just because romance novel conventions require it.

While the novel focuses primarily on Jake and Tori, the storyline in which Jake learns more about his father and unwillingly makes connections with other members of the community are very moving.

In some ways this is a sad book. Jake and Tori’s romance and the book as a whole are thoroughly infused with the grief and loss which accompanied the fires. And the decisions Tori has to make as a wildlife vet make for heartbreaking reading, never mind her personal devastation which is horrible enough. As someone who has lived with and doted on dogs or cats her whole life, stretches of this book were very difficult to read. Even as I write this, I’m swallowing hard, remembering particularly wrenching scenes. But nothing is overdone, and nothing is superfluous. Unlike novels in which the grandeur of world-historical events like revolutions and momentum-changing battles provides the reader with both personal and historical distance, the events of this story are immediate and personal. And how many types of ironic is it that as I finish this review, Australia is dealing with another tragedy, with similar consequences for people and animals?

As a reviewer, I feel obliged to point out the uncomfortable parts of the book, but I hope it doesn’t dissuade too many people, because in the end it is a very rewarding read. This story reminds us that in the midst of tragic events, romance can and does come along and make our lives worth living. And on a less important but deeply satisfying note, it upends pretty much every annoying stereotype about category romance out there. The characters are believable, there is a grand total of one sex scene (which is critical to the plot and the emotional arcs of the characters), the setting is real, and the writing is terrific.