When a review copy of your novel fell into my hands at the beginning of January, I was intrigued. I had actually seen the book at Borders a couple of days before and noted the cover rec from Diana Gabaldon (I know, I know, only gulliable fools are drawn in by cover recs. I happen to be very suggestible). I didn’t know a lot about Nell Gwynn, Charles II or the Restoration Period before beginning the book, but I wanted to. (Why aren’t more romance novels set during the Restoration? It’s such a great and dramatically rich period in English history!) So I settled in eagerly with the book almost as soon as I received it. 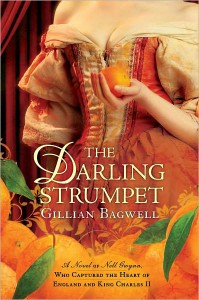 Nell Gwynn is thirteen when the story opens, selling oysters by day and trying to avoid her mother’s fists at night. The book opens on the momentous day that Charles II makes his triumphant return to London, having finally vanquished Oliver Cromwell’s army after years of civil war. Nell is excited to see the parade welcoming the king back to London, but she’s mostly absorbed with getting something to eat – she slept in an alley the previous night, after one of her mother’s violent blow-ups. She impulsively gives her virginity to a red-headed boy who is also watching the parade, in exchange for money with which she buys food. A later attempt to prostitute herself to another group of boys ends disastrously. Nell’s older sister Rose is already working in a brothel, and she convinces the madam to take Nell on.

Nell’s career as an adolescent prostitute is handled fairly matter-of-factly; it’s certainly not romanticized but it’s also not presented in especially gritty terms. I had mixed feelings about that – I was glad that, since this wasn’t a traditional romance, the reader wasn’t treated to Nell’s endless grief over her soiled-dove status. On the other hand, it did feel slightly sanitized. The only truly unpleasant circumstance of Nell’s employment is her madam’s lover and bouncer, Jack, who shows himself early on to be cruel and sadistic. Eventually, he turns his sexual attentions to Nell, and brutalizes her regularly. A regular client, Robbie Duncan, intervenes and installs Nell in his home as his mistress to protect her from Jack. (Jack pops up again a few more times in the narrative, rather pointlessly, I thought. He’s the villain of the book but his appearances are so sporadic and his character so one-note that I wondered why he was included at all.)

Robbie’s a fairly decent guy, but Nell has ambitions that go beyond being the mistress, or even the wife, of a lowly tradesman. She is drawn to the stage; the theaters in London were shut during the Proctectorate, and are slowly being reopened now that Charles II is on the throne. Nell met some theater folk while at the brothel, and found them likable and accepting of her. Eventually, bored with the lack of things to do while Robbie is at work, Nell gets a job, along with her sister Rose, selling oranges to the theatergoers. Before long, she is given a chance to act, and Nell quickly finds that she loves the adulation of the crowds, and they love her.

On the positive side, the prose in The Darling Strumpet is smooth and readable, and the main character is likable. Perhaps too likable. The Nell of this novel is….well, she’s bland. Nell Gwynn led such a rich and dramatic life, and a lot of that life is depicted in this book. But somehow, her characterazation remains flat.

Nell is often contrasted with Charles’ other mistresses, such as Barbara Castlemaine and Louise de Kérouaille. They are rapacious and bitchy; Nell only wants Charles’ love, not the money or fame that come with it. Which may be somewhat true; Nell Gwynn does appear to have been a more popular and likable public figure than some of the other women Charles consorted with. But it doesn’t add to Nell’s complexity as a character, which is pretty much nonexistent. She is a nice girl; all right thinking people love her.

I would’ve been more interested in understanding why, if Nell was only interested in love and not in material things, she hopped from her actor lover Charles Hart, who truly did seem to care for her, to liaisons with a series of aristocrats, culminating in catching the king’s eye. I can imagine that Nell’s upbringing gave her a longing for security. Actually, I had to imagine that, because the discrepancy between Nell’s actions (taking advice from a lord who wants to use Nell’s influence on the king on how to win and keep him) and Nell’s words (all she wants is love!) is never addressed in the book.

The story begins to feel somewhat episodic in the second half, with scenes that seem to be included mainly because they are known from the historical record. For instance, Nell has a gambling problem for about two pages. She wins a bit, then loses disastrously, and Charles has to bail her out. She vows never to gamble again, and apparently she doesn’t. It doesn’t really seem to be worthy of inclusion in the book, except that it presumably corresponds to some real-life documented incident.

The characterization is pretty light all around. Charles II is pretty much the same Charles II we’ve all read of – randy and fun-loving, but no fool. There are a number of lords who appear as either lovers or friend’s of Nell’s, but I confess that I had trouble keeping my Buckinghams and Rochesters straight right up until the end of the book.

At times, The Darling Strumpet feels a bit like a YA novel with an unusually daring subject and some explicit sex added in. There’s a simpleness to the prose, plot and characterization that make the story feel a bit superficial.

As the book draws to a close, it becomes a bit bittersweet and melancholy for me. I tend to have that reaction to both biographies and biographical novels. You know the main character is going to die, and you have to read about a bunch of the people she cares about dying first. (Nell Gwynn was not that old when she died, but the life expectancy during the period combined with the fact that many of those close to Nell were apparently a good couple of decades older than her means that characters are dropping left and right in the last 30 pages or so.) I did feel some attachment to the characters at that point.

Ultimately, I did enjoy The Darling Strumpet, even if I was frustrated that it didn’t manage to be something a bit more than it was. My grade for the book is a B-.